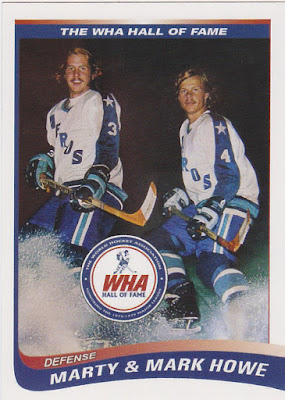 I've been on a Houston Aeros/WHA kick lately. I think it began with Shane posting a Gord Labossiere card on his Shoebox Legends blog. He ended up sending me a dupe of that card and in the meantime I've been chasing Aeros cards from 1970's sets.

I also came across the WHA Hall of Fame site. I had no idea such a thing existed. The museum has an online store and one of the items intrigued me. It was this small (10 card) set that included a couple of Aeros cards. One being the Mark and Marty Howe card shown. At $5 each the set is a bargain and I bought a couple. 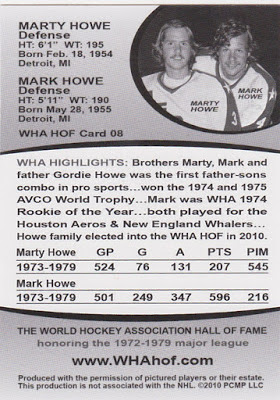 Having the Howe clan play in Houston was a big deal at the time. As the card notes the father/sons combo was a pro sports first. Now that the minor league version of the Aeros has moved on there is very little hockey awareness in the city outside of a midtown hockey bar my sons and I frequent and maybe a Stanley Cup Finals watch party around town depending on who is playing.

Ron Grahame is the other Aeros card in the set. He followed Don 'Smokey' McLeod as an Avco World Cup winning goalie in Houston. I once got him to sign an Aeros' program at a 'Meet the Players' event. His success here wasn't a fluke. He played well in a stint with the Bruins after leaving Houston. 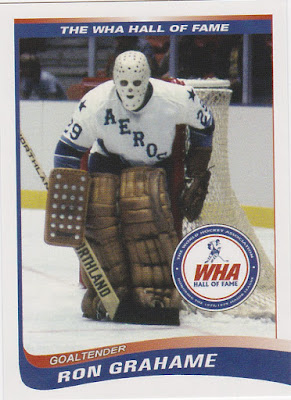 The set also included a card of the Avco World Cup, the WHA's championship trophy. I have a good friend who was working for Foley's, Houston major department store at the time. The morning or so after the Aeros won their first title he passed by the store's loading dock and there sat, all alone and unattended, the trophy. It was destined for an in-store promotion/celebration for fans that day. Meanwhile the huge shiny thing was bidding it's time about five feet from the busy downtown sidewalk traffic along Dallas Street. I always told him he should have just lifted it and put it in his car. What a souvenir that would have been! Hard to picture the Stanley Cup in that situation. 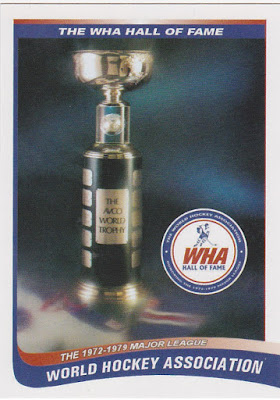 This promo from the WHA-HoF shows the whole set and saves me from scanning them all. 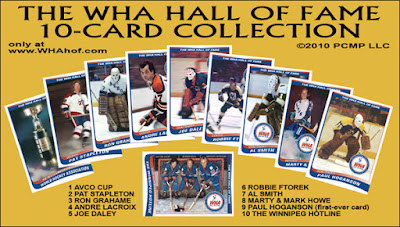 The other famous WHA trio is also pictured on a card. The Winnipeg Jets' "Hot Line" of Ulf Nilsson, Bobby Hull and Anders Hedberg is shown together on this one. 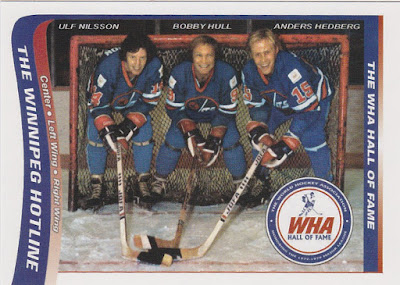 This past fall the Jets honored their WHA heritage with a night honoring that trio.

The WHA was a blast back in the day. I'm having fun putting together a checklist/wantlist of Aeros cards. It's great to have a project.