I got a note from Jim from Downington, author of a dozen (literally) blogs and Man About Town a few weeks back saying he was sending me some Orioles items he'd come across. I love notes like that. I have lots and lots of Orioles stuff and sort of figure I've seen nearly everything there is to see memorabilia-wise. And Jim proved me wrong. When the large manila envelope came last week I was curious and thought maybe it contained a game program or some other publication. No, it was better. Inside was another envelope, the one posted at the top. And inside were a couple of 1968 Topps Game Card inserts which I will post soon, and  four Orioles Stand-ups which were completely new to me.

Meet Series 1 of the Crown/WMAR All-Time Orioles Action Stand-ups. These babies are about 9 inches tall and die-cut and have a 'punch-out' base so they could be made to stand up, hence the name. In 1973 there was a set of a similar nature known as the Johnny Pro Stand-ups (there were also sets that year for the Phillies and Baltimore Colts). But these Crown 'cards' were absolutely new to me. They were sold by Crown Petroleum dealers in the Baltimore area according to the info printed on the envelope.

The four in this set include the Robinsons, Jim Palmer and Rick Dempsey. In his note Jim expressed puzzlement as to how The Dipper got mixed in with three Hall of Famers. I wondered the same thing.

A quick trip to eBay and I found some info on the full set of 12. Here is the checklist:
Frank Robinson, Brooks Robinson, Rick Dempsey, Jim Palmer, Terry Crowley, Paul Blair, Boog Powell, Ken Singleton, Earl Weaver, Tippy Martinez, Bobby Grich and Cal Ripken. Just a guess on my part but perhaps the "All Time" designation meant that the group was put together to represent the best Oriole player at each position. You can make a case for that by assigning the spots as follows:

I can see that. You could make a case for other players at those spots but I'd take my chances with that crew.

Anyway I found the sets on eBay listed for wildly varying prices. One seller had the whole set for $40. I poked around and got the second and third sets of four cards for about a dollar a card, shipped and in the original envelopes.

Here is a look at the back of the Brooks Robinson Stand-up. And below that is the back cropped and re-sized to show the printed section in more detail. 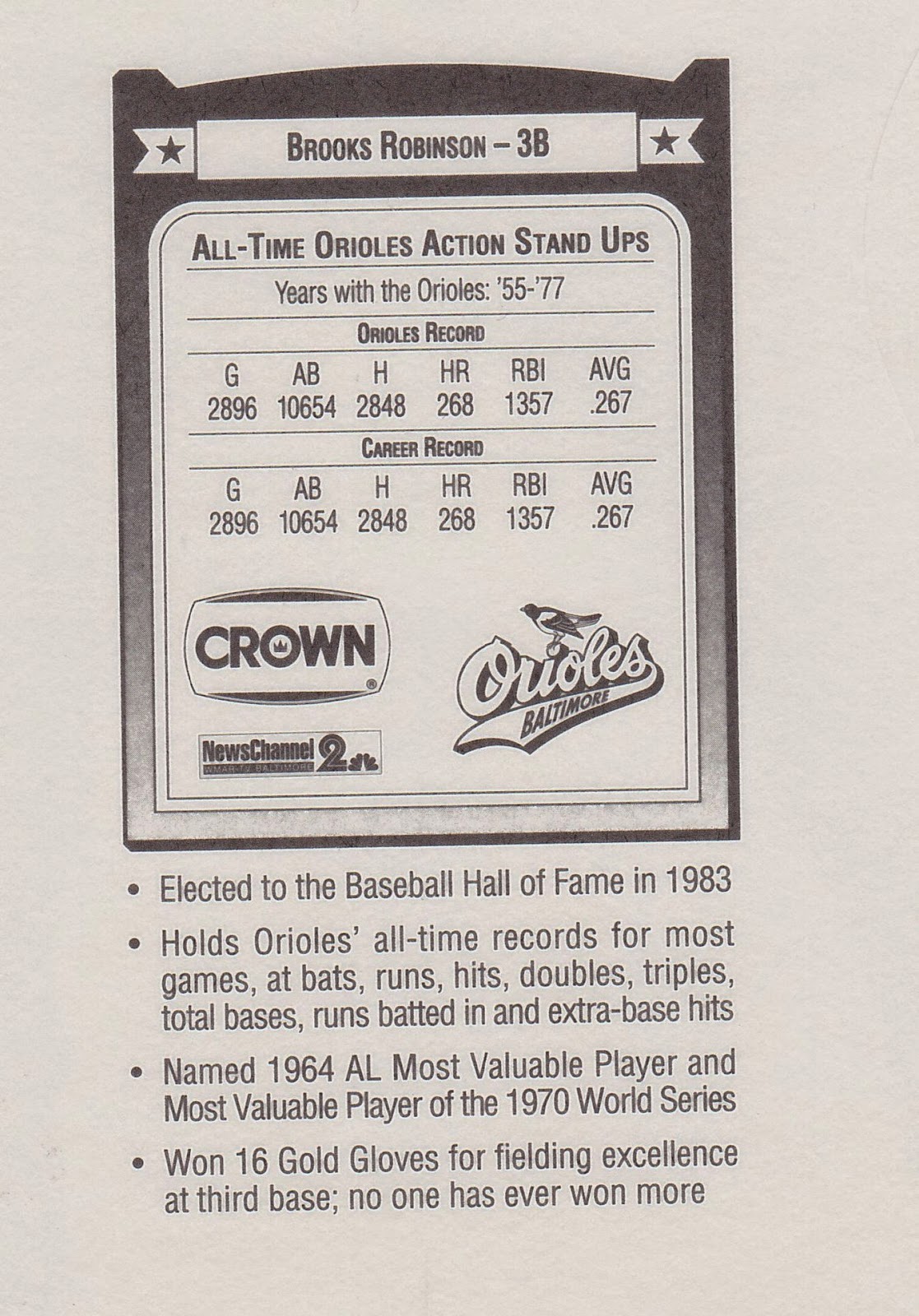 Crown has done other Oriole promo items in the past including the huge Crown/Coke Orioles set which contains a card for every Oriole to appear for the team at the time of the promotion in 1991. That set had some interesting ramifications.

Finally here are a couple of my Johnny Pro Stand-ups: 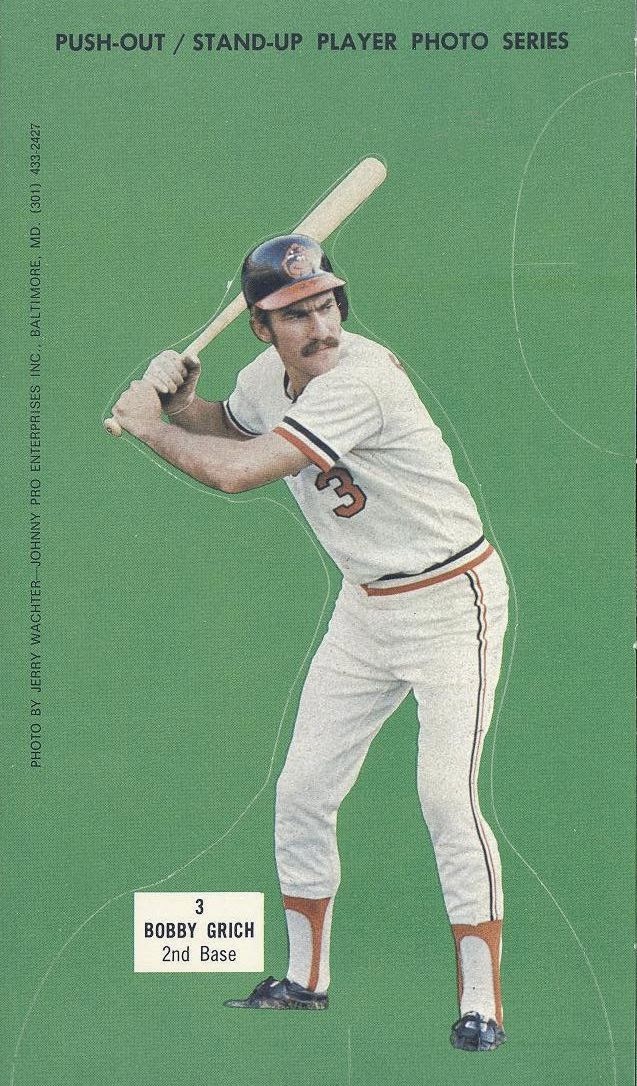 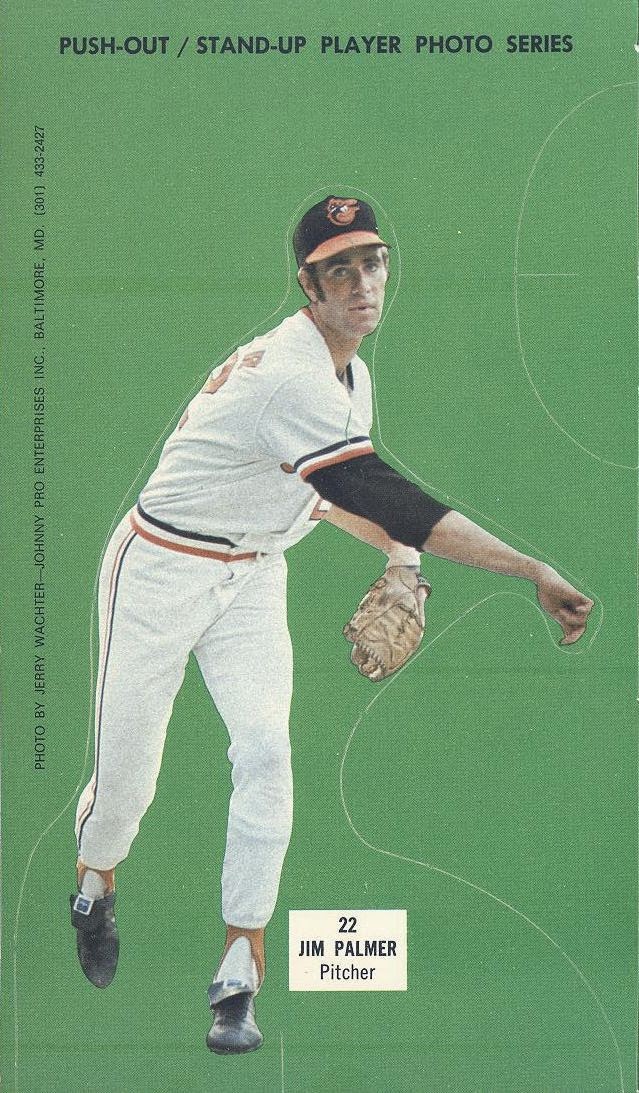 Thanks again, Jim. This is a neat addition to my collection.
Posted by Commishbob at 5:00 AM