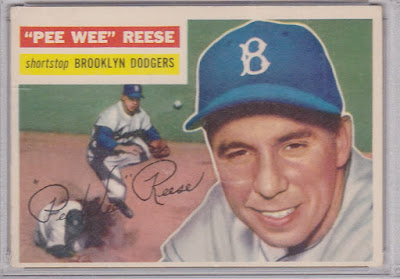 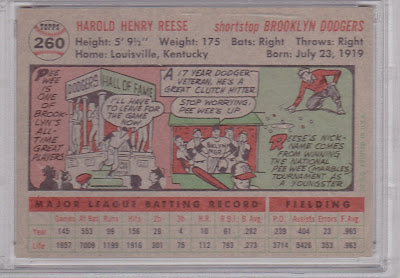 I've started adding some '56s to my collection. Nothing special, mostly commons in f/g condition. Saying I like the set is like saying I like ice cream, hell everyone does. I also have a vague goal of completing a Hall of Fame collection. I'll never finish it unless I hit the Powerball lotto. Years ago I got started by picking up some of those 1961 Fleer All Time Great cards of some of the real old timers, guys like Grover Cleveland Alexander and Hughie Jennings. Guys I figured I'd never get a 'real' card of.

But as time has gone by I've been able to afford 'real' cards of Babe Ruth, John McGraw, Frank Chance, Chief Bender and several others. So I am again going to pursue Hall of Famers. When I came across this Pee Wee Reese in an online auction I saw a chance to get a '56 and add a H-o-F player whose card I lacked. I'm sorta, kinda, in a way a half-ass Dodger fan (mostly because of my long standing Sandy Koufax man-crush and the fact I once lived in Brooklyn) so the '56 Reese had special appeal. Plus, he's finishing off a dp in the background pic. Nice.

The price was right and the card looked pretty nice so I grabbed it. I scanned it before I pried it out of the PSA grade slab so the scan isn't as sharp as the card looks in hand. But you get the idea.

And I learned something in the process. According to the cartoon on the back Harold Henry Reese got his nickname by winning the national Pee Wee Marbles Tournament as a kid. I'd bet there isn't a kid in America that has any idea what a marble was used for back in the day.
Posted by Commishbob at 5:13 PM