I've been a 'stealth' Rusty Staub collector for a while. Along with pitcher Don Wilson, Staub was a player I enjoyed watching and rooted for when I first came to Houston in the late 60s. I continued to follow his career through his time with the Expos and, to some extent, the Mets and Tigers.

I don't actively track down his cards. I don't have a Staub checklist like I do for guys like Billy Pierce, Johnny Callison, and Mike Cuellar. But I used to put stick Staub's cards in one of my 'star' binders when I found one in my stash. And over the last few years I've added them in fits and starts, mostly from show bargain bins.

Now I don't chase autographs particularly but I like having one example in my player collections. It occurred to me that I had no signed Staub card. A month or so ago I decided to rectify that. I found this 2004 Fleer Greats card on eBay for a nice price and picked it up. I didn't pay much attention to it other than the fact that it was an 'authorized' signature card so I figured it was legit. 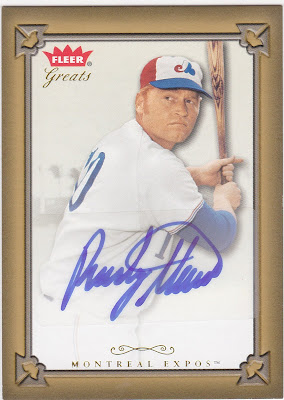 What I didn't figure is that it was a sticker autograph. I don't have anything against sticker autographs but if I'm going to just have one signed card of a player I'd rather it be an 'on card' one. ¯\_(ツ)_/¯

I guess I could have looked closer at the photo in the listing but I'm pretty quick on the trigger sometimes. This was one of those times. And besides...I did look at the text on the back and it didn't raise any red flags. Here's my scan of the back: 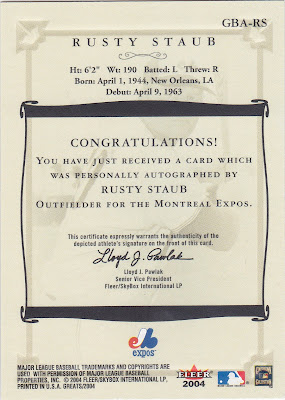 And here is a closer look at the key section of the back just in case, like me, you have aging eyes: 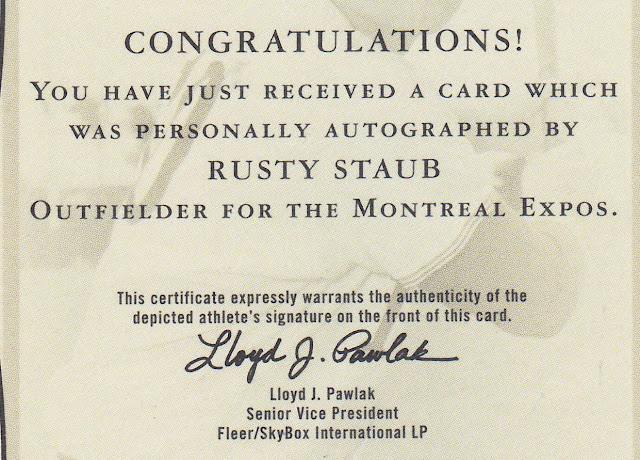 Notice that it says "PERSONALLY AUTOGRAPHED". Well, if we are going to get technical the sticker was personally autographed. The card? Nope. Here's the graph and blown up it's pretty obvious that it's a sticker. 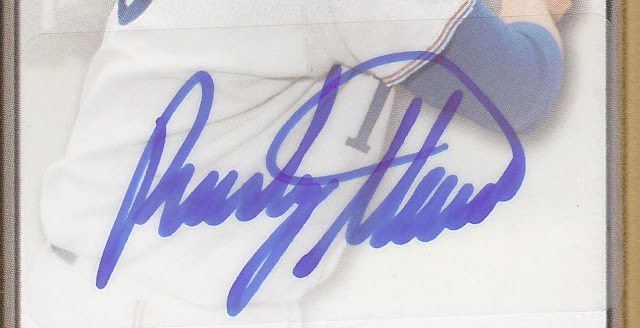 It's not the end of the world. After all, it is a pretty attractive card. This is neither the first nor last time I'll buy or bid without looking at the small print as it were. So I'll quit kvetching over a first world problem and go stick it in my binder now.

Posted by Commishbob at 9:12 PM