Have you ever bought something because it was a bargain even if you had no need for it? In that vein, I present this 1960 World Series Press Pass. This was a $35 impulse buy on Net54. I'm not even sure what the impulse was exactly but when it was posted I checked eBay and saw things like this going for $150 and up. I sent the seller an 'I'll take it' message and figured I'd decide what to do with it later. 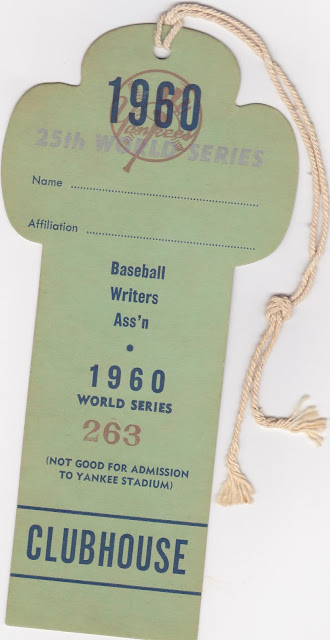 I do have an affinity for the '60 World Series. That year was the first I remember that we watched the Series on televisions at school. And I definitely remember rushing home to watch the end of Game Seven with my mother. What a game!! Here is the defining moment:

The back of the pass had a couple of (very sticky!!) glue strips, probably from being mounted in a display. I temporarily covered them with blue tape until I find a better way to deal with them. 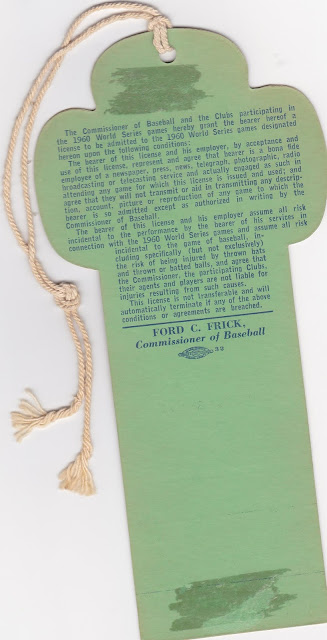 Once I had it in had I decided that I'm going to send it off to be signed by one player from each of the two teams. I'm thinking of Bobby Shantz and Vern Law, both reliable signers.

Two fun facts about the 1960 Series... Game Seven is the only postseason game ever with a single strikeout... and Bobby Richardson is the only player in World Series history to be named MVP despite being on the losing team. He went 11 for 30 with a dozen RBIs.

Tapes of the first six games of the Series are long gone but singer/actor Bing Crosby, a part owner of the Pirates at the time, had the game taped and that video was found decades later in his wine cellar. If you have an hour and a quarter to spare check the last three crazy innings of one of the most iconic games in baseball history: