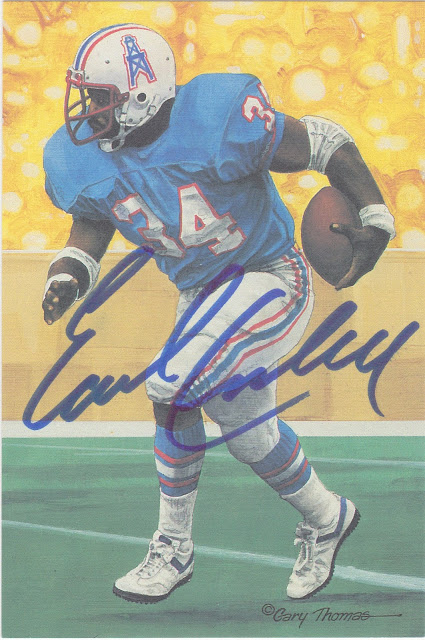 When you talk about the great running backs of all time Earl Campbell must be in the conversation. I'll always maintain the Jim Brown was unsurpassed on the field but if you needed a first down to save your life I think 'The Tyler Rose' would be as safe a bet as any.

I've got football on my mind as I'm getting ready for my fantasy league's 39th season. I no longer own a team in my league...I turned that over to one of my sons and I just act as a consultant to him, but in our first year, he was a stud averaging almost 130 yards a game.

Earl had a 'Koufax'-like career. He blazed across the football world but only for a short time. He never backed off from a hit and that punishment not only shortened his career but it's obviously affected him later in life. I love football but sometimes I wonder if it serves any purpose.

I came across this signed 1991 Goal Line card a few months ago while searching for the Colts in the set. (I have those now).  The set is made up of members of the NFL Hall of Fame. I don't think it is still being produced but I haven't bothered to check. I know that all the HOF Baltimore Colts cards have been issued so there's no need for me to look any further.

Back to Earl. My lasting memory of him comes from his days at the University of Texas. My Houston Cougars were playing UT at Rice Stadium in 1977 and Earl ran in a score and zoomed right through the end zone in front of me. He collided with Bevo, the live UT longhorn mascot. That steer let out a very loud 'moo' and was actually moved sideways by the hit. It was surreal. 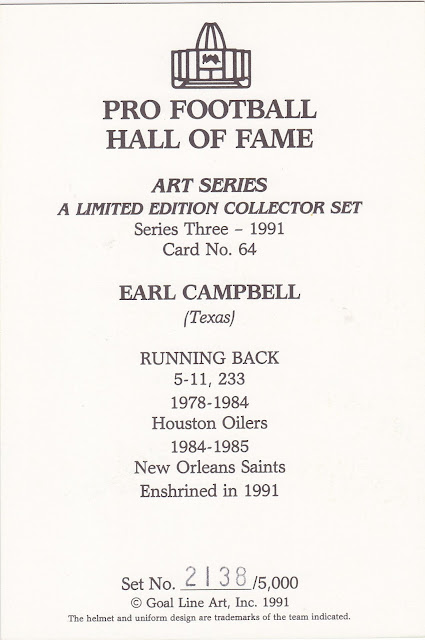