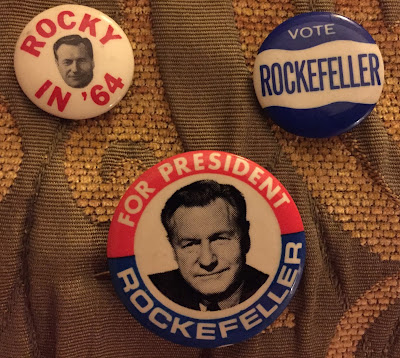 Lately I've been so caught up in chasing and posting the '63 Fleer set and the '61 Topps MVPs that I've pretty much shoved most of my other collecting off to the side. But not blogging about them doesn't mean I was not adding anything.

A few weeks back I won this small lot of Nelson Rockefeller campaign pins. Rocky was the governor of New York State back when I was growing up and was a favorite of my (then) liberal leaning parents. He tried for the Republican presidential nomination several times but never won it. He later served as Vice President under Gerald Ford when Ford ascended to the Presidency following the resignation of Richard Nixon. He chose to retire and didn't run on the ticket with Ford in 1976.

I've always found him a fascinating character, perhaps because his political and social beliefs so closely paralleled my own. His Wikipedia page is recommended as a primer on the now very forever dead liberal branch of  the Republican Party.

In the photo above the upper left button is obviously from 1964 and the larger 'For President' red and blue one comes from 1968. I'm not sure about the blue one or the large button below. 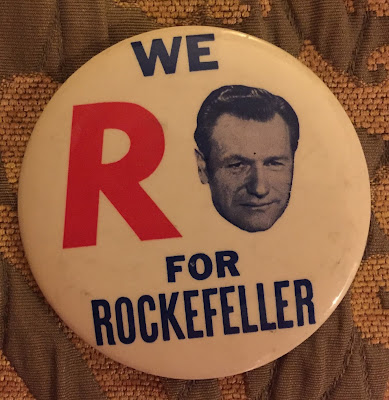 These are not my first Rocky pins but these are the first that I am certain are legit and not reprints. (Why anyone would reprint a Nelson Rockefeller pinback is another story altogether.) There was another pinback in the lot that came along for the ride. The seller didn't realize that it wasn't a Nelson Rockefeller pin. It's pictured below and it's a pin that actually refers to this musical Brit group. [warning...the music video plays automatically]. 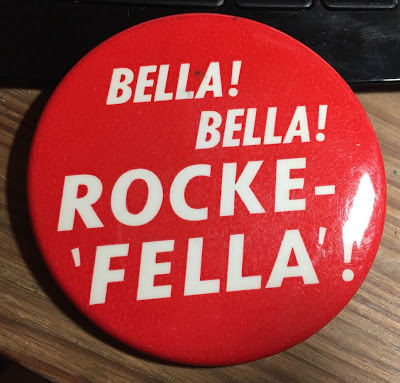 Honestly I can understand the seller's mistake. Bella Abzug was a feminist/political activist and New York State Representative in the 70s.  The button might have seemed to the seller to be a strange political mashup or something. Unlike the real Rocky buttons, this one already hit our recycling bin.