I guess I collect Frank Thomas (the old one) 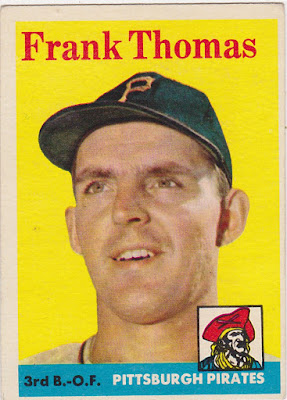 I picked up this '58 card of 50's/60's slugger Frank Thomas a couple of weeks ago for a handful of change. I've debated collecting the '58 set for the longest time. Back when I first joined eBay I began finding and buying random cards '58s. I have noted before that this is the first set I remember seeing as a kid.

It's garish and has too many head shots for sure. Despite it's flaws it holds a great deal of appeal for me. I can't see myself collecting and blogging another vintage set any time soon, but who knows?

But back to Big Frank. His 1960 card was on my 1960 Topps blog in May. I wrote a long post about his when I featured his card on my 1959 Topps blog. You can read that post by clicking here. But here are the highlights if you'd rather not click thru here are a couple of notes of interest:

-He was traded by the Phillies to Houston in 1965 for starting a fight with teammate Dick Allen on the field. Now considering that Thomas supposedly earned his nickname because of his lousy people skills a fight with the charisma impaired Dick Allen was probably a hot wager in the Phillie clubhouse.

-Bill James's win shares (of which I am clueless), sez he was the worst fielding third baseman ever among those among the top 300 in innings played at third.

I never cared much for the abbreviated stat format on the backs of some Topps issues but it does leave room for a lot of other issues and some classic cartoon art. 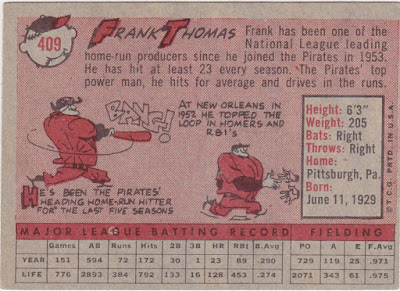 Not a bad card for fifty cents.
Posted by Commishbob at 9:12 PM