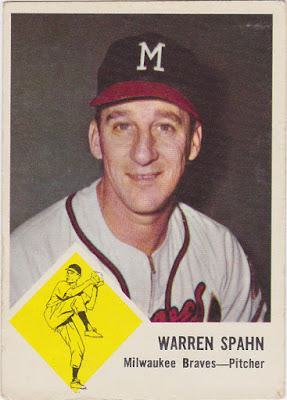 With Spahnie it's all about the angles. Smile tilted one way, nose bent another way, cap brim cocked to a different angle altogether. Add in the terrific Milwaukee Braves gear and the result is almost always one fine baseball card. 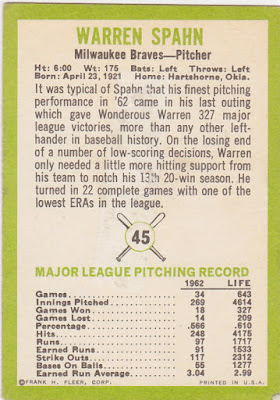 I'm now at 56 60 of 66 in my pursuit of the 1963 Fleer set. Spahn was the first 'star' card I picked up once I knocked off almost every common. To get those commons I set myself a goal of collecting them in decent shape and priced at $2 or less. I couldn't quite pull that off but I wasn't much over in most cases. I don't have all 60 in hand yet but with the group I nabbed off COMC last week in route it won't be long.

It may not appear so in the scan but the card of Glen Hobbie shown below is the worst of the 'commons' in terms of condition. That visible crease on the lower right is much longer and more pronounced in hand. But for a dollar card I'm good with it. 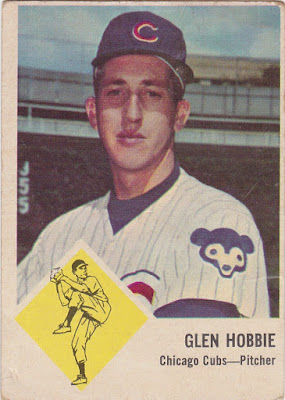 Sometimes my friends and I would be captivated by a player due solely to his name. Bill Monbouquette was one such player. We'd like to imitate Red Barber describing a Monbo outing against the Yankees. I can still hear that in my head. 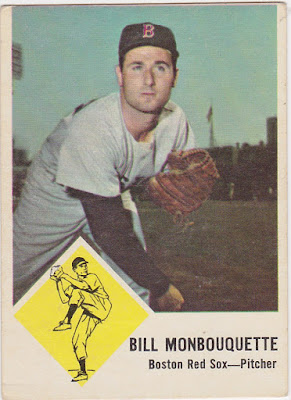 With what I know of Turk Farrell I'm guessing he was a real blast to have as a teammate. 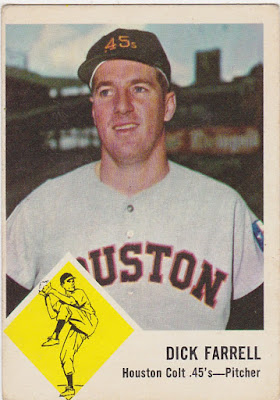 I dabbled with the Phillies as a NL team to follow way back when and Demeter was a favorite of mine. The crease on his card is pretty ugly. This one may some day get upgraded. 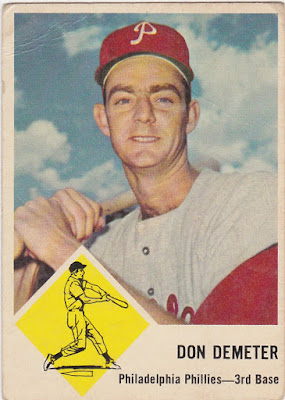 Dick Howser on a card that includes a bat rack and the iconic old Yankee Stadium facade and lights. Bonus points for the cool Athletics sleeveless tops. One of my favorite cards in the set. RIP Dick Howser. A baseball 'lifer' whose life ended much too short. 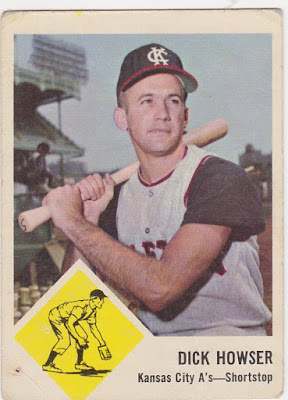 Bob Purkey in the Polo Grounds. 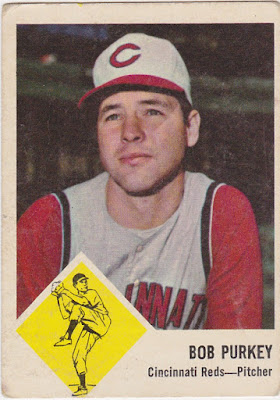 That's old Griffith Stadium behind Tom Chaney. I have no memories of those caps. This is another creased card. Since I bought this one I've seen others in better shape for $2 or less. Sometimes my impatience costs me. 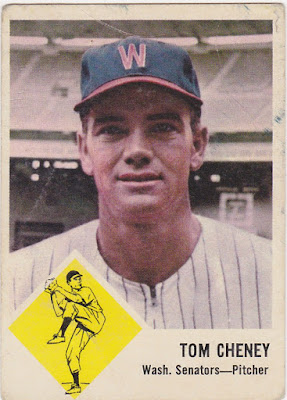 I've posted my remaining needs for this set over near the top of the right side column. I have no illusions of someone discovering that they have a spare Joe Adcock and dropping it on me but, hey you never know.
Posted by Commishbob at 6:30 AM