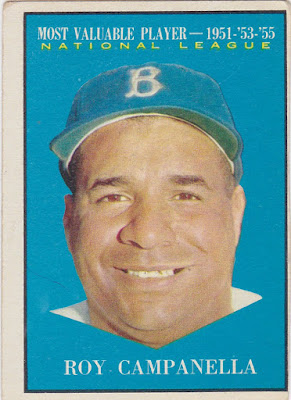 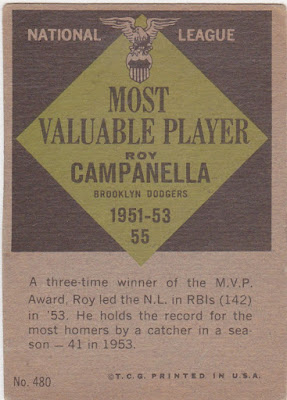 There are only 16 cards in the 1961 Topps MVP subset but oh, boy it's packed with star power. Here is one on my favorites. Roy Campanella had his career cut short due to the injuries he sustained in a car accident in January of 1959. He lived not far from where my family was living on Long Island in those days, on the north shore in Glen Cove.

How great a player was he? Well, he won three MVP awards over the course of just five seasons. Just for grins here is the list of the top NL MVP vote getters in 1955, the year Campy won his third trophy:


And don't forget that Hank Aaron and Willie Mays were in the league as well. That's some serious competition. Lots of info on Roy Campanella out there. The more you dig the more interesting stories you find. Here is a snippet of Campy's bio on SABR's site:

Like most of the first generation of black players to cross the color line, Campanella took a steep pay cut to enter Organized Baseball and was forced to start at a level far below his ability. A top star in the Negro leagues, he found himself competing against a bunch of inexperienced kids, most of whom would never rise above Class A ball. Furthermore, he would be making only $185 a month for six months at Nashua rather than the $600 a month he’d been earning with the Baltimore Elite Giants.

Campanella hit .290 and drove in 96 runs in 1946 to win the Eastern League MVP award. Early in the season, Nashua manager Walter Alston, who doubled as the club’s first baseman, asked Campy to take over the team for him if he ever got tossed out of a game. His reasoning was that Roy was older than most of the players and they respected and liked him. Sure enough, in a June contest Alston was ejected in the sixth inning and Campy became the first black man to manage in Organized Baseball. Moreover, his strategic move resulted in a comeback victory when he called on the hard-hitting Newcombe to pinch-hit and was rewarded with a clutch home run.


Roy’s experience in Nashua also changed his parents’ life. Fences around the Eastern League were virtually unreachable, and a local poultry farmer offered 100 baby chicks for every Nashua home run. At the end of the season, Campy collected 1,400 chicks as reward for his league-leading 14 circuit shots. He had them shipped to his father, who promptly began a farming business on the outskirts of Philadelphia.


I'm down to just two cards from this subset on my want list, the Aaron and Yogi Berra cards. I keep bidding and losing but I'll get lucky at some point.
Posted by Commishbob at 9:26 AM