More from the 1961 Topps MVP Subset 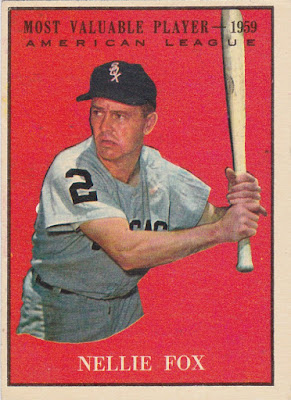 I thought I'd toss these up since I had them scanned. They span a decade of  MVP winners and include a bunch of well known players. Nellie Fox, for example. There he is with the chaw. He won his MVP while leading the White Sox to the '59 AL crown. 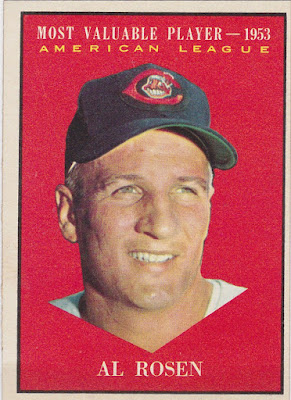 Al Rosen missed out on the Triple Crown in 1953 when he finished barely behind Mickey Vernon of the Nats for the AL batting title. But he was a unanimous choice for MVP. 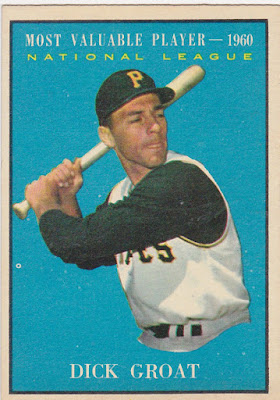 The Pirates' Dick Groat won the batting title, a World Series ring and the MVP Award in 1960. In 1963, his first year with the Cardinals, he finished second in the voting to Sandy Koufax. 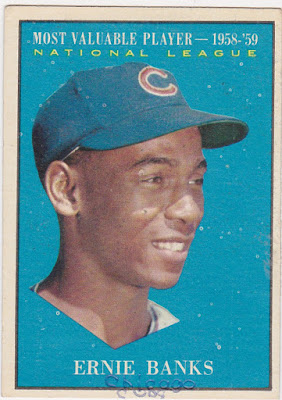 Ernie Banks won back-to-back MVPs. I'm sure he would have traded them both for a shot at a World Series. This card came at a discount because some kid was kind enough to add the name of Ernie's team below his name.

Hank Sauer is the 'least celebrated' player in the group. His winning year, 1952, saw him lead the league in HR and RBIs. Robin Roberts, pitching for a fourth place Phillies club, won 28 games, had an ERA of 2.52 and a WHIP of 1.021 and finished second in the voting. I might have voted for him. 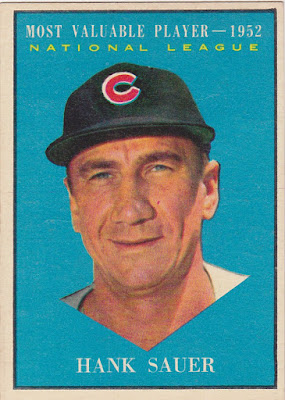