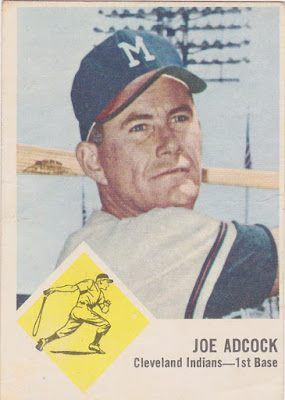 I picked up the Joe Adcock out of the '63 Fleer set quicker than I thought I would. It's one of the pricier cards in the set. Fleer is said to have pulled the card late in the production run and replaced it with the checklist card (which is the highest cost card of them all).

Note that Big Joe is listed as being on the Indians. But his uni and place in the set (right after Frank Bolling and Warren Spahn of Milwaukee) tells you that he was on the Braves when the set was being planned. Adcock was traded to Cleveland on November 27 of 1962 so Fleer must have had the preliminary checklist in place before then.

Interestingly his name should have put him in front of the other two Braves since the players for each team were numbered in alphabetical order by last name. My guess is that Adcock not only was pulled from production but he was a substitute for another player in the first place.

Looking at the Braves roster from 1962 shows that only Joe Torre is a possibility...his name comes after Spahn's... but he was just a part timer in 1962. The more likely scenario is that Adcock filled the slot originally designated for Richie Ashburn of the Mets who were the next team on the checklist. Ashburn retired after the 1962 season but he had hit .302 and made the All Star team so he was a likely candidate. And that slot would have fit his name since Roger Craig comes next on the checklist.

All that and $2.99 will get you a pack of Topps something or other at Target I think.

But back to the card. For some reason going in to my chasing this set I was under the impression that this card would be second in cost but that wasn't the case. I didn't pay as much for it as I did for the Maury Wills (and maybe the Koufax but I bought that years ago and I don't remember what I paid). I expect to pay more for the Clemente, maybe the Yaz and certainly the checklist. Those are the last three I'm looking for.

Like a lot of the '63 Fleers it's off center but otherwise it's in pretty fair shape. My scanner makes the corners look a bit sharper then they are but overall it was a pretty nice example for the cost. I saw a bunch of these going for more that were not in nearly the condition of this one.

Posted by Commishbob at 9:20 AM