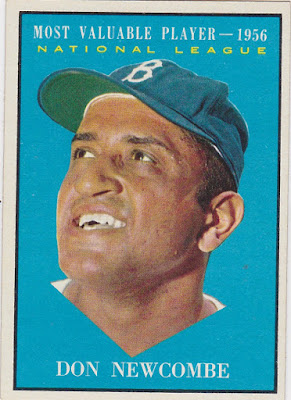 Late in September Night Owl featured Don Newcombe in his 1956 Topps Card of the Month feature. It's a sweet card and it reminded me that Newk was included in the Topps MVP subset from 1961. It's a group of cards that I've been (very) casually collecting for what seems like decades.

I went out and found this copy on eBay and am very happy to add it to my collection. Don Newcombe is a often overlooked figure in the history of baseball in general and the Dodgers in particular. Night Owl outlined much of the story in his post.

I commented over there that Newk never got much consideration for the Hall of Fame and that's understandable I suppose. He got a late start in the majors due to a couple of factors. He came of age in a time when he wasn't going to be signed by a major league team. He spent a few seasons pitching in the Negro Leagues before Jackie Robinson broke through those barriers. And once signed by the Dodgers he had to climb up that incredibly deep farm system put together by Branch Rickey. In the end his numbers don't hold up to those pitchers enshrined in the Hall but his reach was much greater than just baseball stats. A recovered alcoholic Newk devoted much of his post-career time to assisting others to reach sobriety.

My father, a pinstripe-bleeding Yankee fan, had good things to say about Newcombe. And that was high praise considering that my old man lived just blocks from Ebbets Field and yet held the Bums in such low esteem that he never even walked the few blocks to see a game there until the Yanks played a World Series game in Brooklyn.

As for me I never saw Newk pitch but I do remember him being acknowledged one Sunday evening after his retirement as he sat in the audience at the Ed Sullivan show. 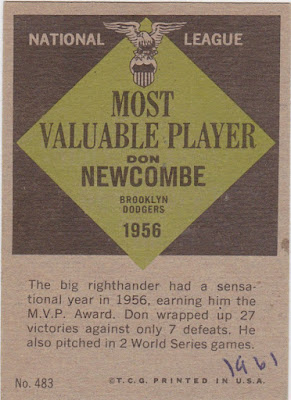 Here is a checklist of the 1961 MVP subset. The ones I own are in red italics and I'm looking for the rest.

Posted by Commishbob at 9:35 AM