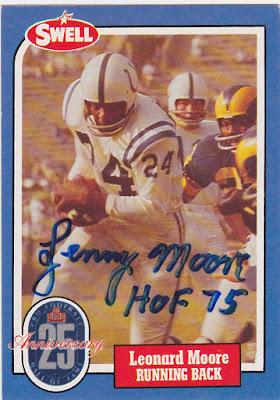 Hall of Famer Lenny Moore holds a special place in my heart. I haven't met many of the old Baltimore Colts but I was able to meet him briefly in the lobby of a hotel in Dallas quite by accident many years ago. He was very gracious and it didn't seem to bother him that some random fan came up to him and wanted to talk Colts while he was waiting to check out. I don't recall what I said to him but I was so in awe of meeting one of my heroes, one of the most exciting football players ever, that I probably mumbled something stupid.

I recently received a very nice surprise from my friend Mike McKay from Chicago. He's a prolific TTM collector and he was kind enough to send along a card he received back from Lenny recently. And I have the perfect place to slot this one.

Last football season as my fantasy team spiraled towards the worst record I've had in 35 years I went in to the league system and created a three custom players, Ray Berry, John Mackey and Lenny Moore. Then I picked them all up on waivers for one day just so I could put their cards in my fantasy football binder. Sure it's dumb but hey, you collect your way and I'll collect mine. ;-) And besides, there is precedent. I did the same thing for Johnny Unitas a decade ago.

Even unsigned I'd like this card. It's a 1988 Swell Gum card and the set commemorates the HoF's 25th anniversary. The shot is from a Colts-Rams game in the LA Coliseum and Johnny Unitas makes a cameo after handing the ball to Moore. 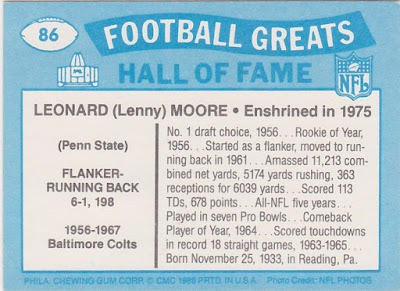 Mike included a copy of the letter he sent to Moore who answered his questions. Mike always customizes his letter with a logo or helmet like he did here. It's a nice touch. This Lenny Moore 'gift' isn't the first time Mike has been very generous, btw. 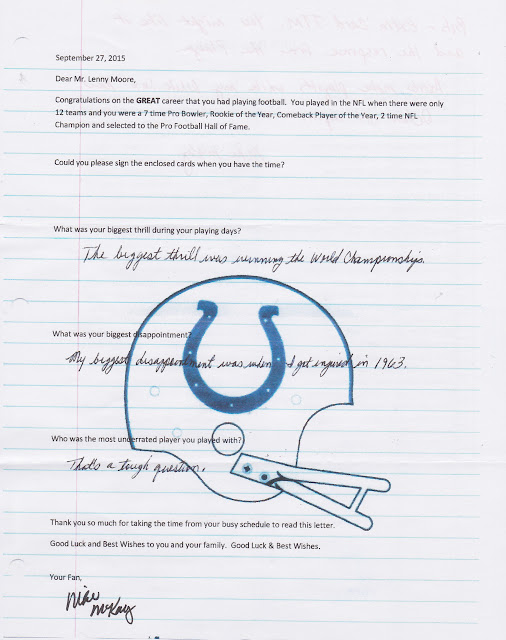 Thanks so much Mike. Let's work on meeting up next June in Chicago!
Posted by Commishbob at 11:17 AM