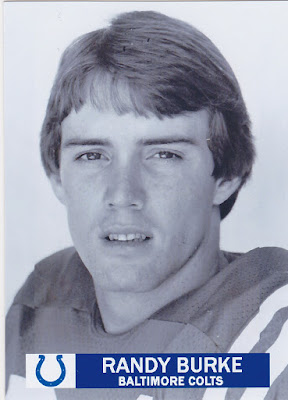 My ongoing interest in obtaining a Randy Burke card for my Fantasy Football collection reached it's natural conclusion when I ordered a couple of custom cards to be made from photos I've picked up in the last year or so. I had previously made my own custom cards but while they looked OK I really had no way to produce a quality professional-looking two sided cards.

The backstory I discussed here previously. In a nutshell I finally determined that the 'card' I had been searching for was actually a team issued photo. I'm not sure if they were distributed to the public or were exclusively used as publicity stills.

In the end I found and purchased two copies of the pic, neither of which was without flaws. The photos are below, the one on the left had red ink bleeding thru from the newspaper archives stamping on the reverse. The other had crop markings. 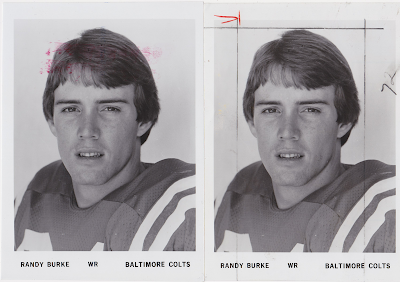 But using my very rudimentary graphics skills I pieced together a clean copy (below) that I was able to made use of for the first card. 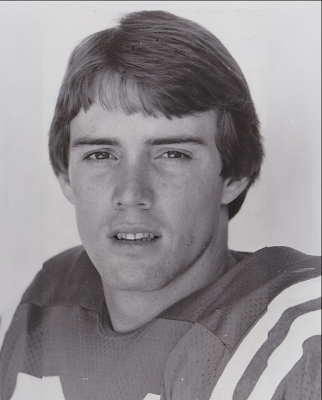 The final product, which is posted at the top and arrived late last week, came out really well I thought. Clean, simple design that reminds me of regional issues. The finish is shiny and the card stock, while not as thick as a '56 Topps, is better than the current Archives release. I'm very happy with it. Here is the back: 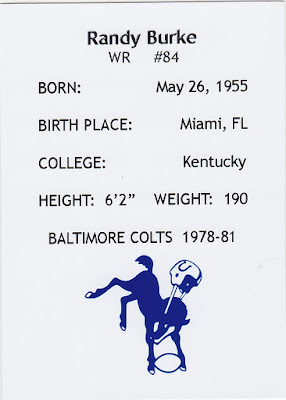 The second card was made using a photo I purchased from the Baltimore Sun archives. It shows Burke as a rookie being fitted for his helmet by the Colts' equipment manager. Here is the original pic. Below that I've posted the caption. 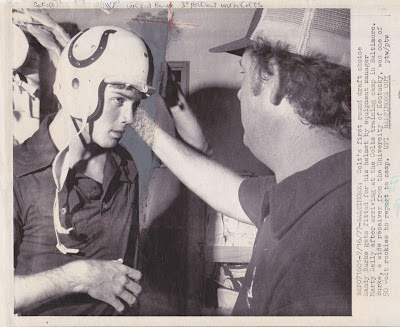 I cropped the shot and didn't bother to try to eliminate any of the gray 'painted over' area that the Sun photo editor applied. Turns out it doesn't detract all that much from the finished card: 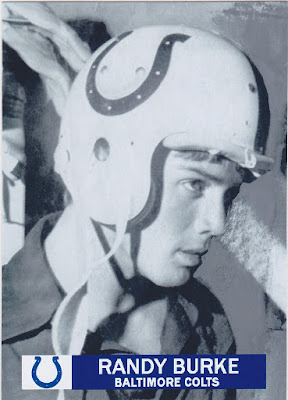 The reverse is identical to the first card.

I ordered some extras and sent them along to Randy Burke as I've discovered that he didn't have any cards from his career. That's not surprising given that nothing seems to have been issued. I'm hoping he likes them and I've asked that he sign one of each for me. I'll post if he does.

So my collection 'white whale' has been reeled in. Not exactly as I had envisioned it many years ago when I first went on the hunt for a card of every player on my fantasy rosters but in many ways it's even better. Thanks to Shelley at Customcardboard for the nice work!

Posted by Commishbob at 2:00 AM