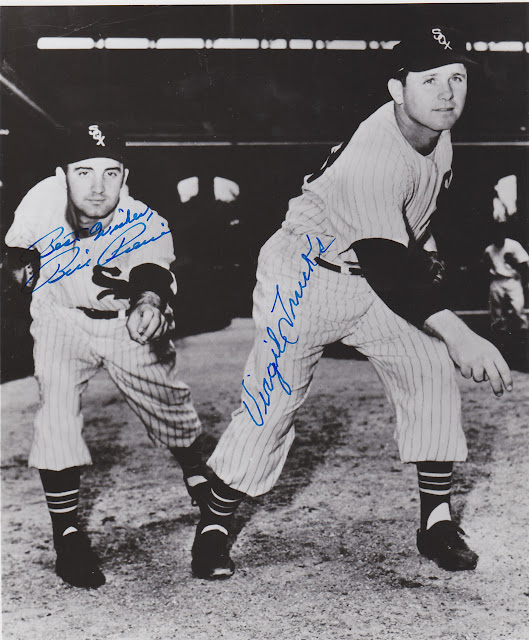 I added this to my Billy Pierce collection. Pierce and Virgil Trucks were formidable pitchers during their careers and prolific signers afterwards.

I checked and saw that they were teammates on the White Sox for two and a half seasons, from June of 1953 when Trucks came over in a deal with the Browns, through the end of the 1955 season. I noticed something while checking into their times with the Chicago. In 1954 the Sox won 94 games but finished 3rd in the AL, 17 games behind the Indians. The Yankees won 103 games yet were 8 back at the finish. What's more interesting is that those were the only three teams to finish over .500 that season. The Red Sox were fourth.....47(!) games out.

Trucks won 47 games in his two and a half seasons in Chicago and had a 3.14 ERA and a 1.25 WHIP. He spent nine years with the Tigers and also saw times with the A's, Yankees and Browns but his best pitching may very well have come with the White Sox.
Posted by Commishbob at 5:57 PM