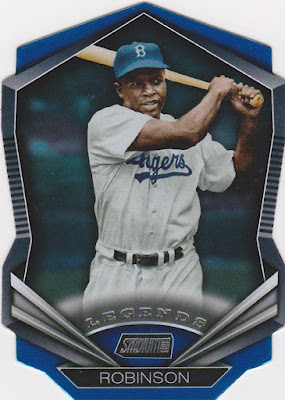 I picked up an 8 pack box of Stadium Club and a pack of 2015 Score football at Target recently. The Stadium Club cards are great. No need for me to repeat what everyone else has said. Seems they get universal praise and I like them a lot, too. My only gripe is that I didn't get much in the way of Orioles or players I'm interested in. But that's probably on me. I did get an 'Albert Belle as an Oriole' card. Thanks a bunch.

I buy a pack or two of football cards each year just to do it. I'll probably spring for a pack of Topps football when they come out. Score is Score. They don't cost a lot and they won't bowl you over but I did get some nice cards for my fantasy binder. I'm always looking for cards of guys in the uniforms of the team he plays for when I own them. I was able to upgrade from some 2014 rookie cards of guys in college unis so I was happy.

One thing I picked up in both the box of SC and the Score pack was a diecut (diecut?, die cut?, die-cut?) card. Diecut cards have been around forever. There were some in the 1920s and probably before that. But I'm no fan of them. In modern sets they are just another gimmick. I like the color scheme of the SC Jackie Robinson card but that's about all.

That Robinson card is in the shape of a shield, more or less. But what's the deal with the Aaron Rodgers card? Is there some significance to the way it's cut? Am I overlooking something obvious here?

Posted by Commishbob at 8:30 PM