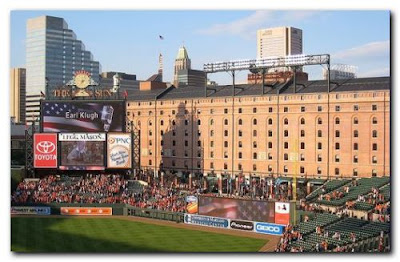 It's been ten years since I attended a game at Camden Yards. I'll fix that with a visit at the end of July. I'll be seeing the Tigers come through Baltimore and I expect to make it out to at least two of the three games they play while I'm there. Hopefully all three. I just hope my recent terrible record of seeing my teams in person can be turned around.

The Texans lost each of the games I went to in 2014, my Houston Cougars lost more than they won in all three of the sports I watched live. The Orioles have gone 2-6 in games I've seen them play in Houston and the Rangers won five in a row before I drove up and saw them lose to the Stars in January. They had another win streak after that game. So it's not promising.

But I'll be there nonetheless. Should be fun. To get me in the right frame of mind I'm posting some Orioles cards sent my way by Shane of Shoebox Legends. I love Shane's blog and he seems like a really nice guy. The cards he sent are pretty much all new to me. Of course with my serious lack of modern cards it's not hard to hit something I don't have.

I looked up Brandon Snyder and read that the Orioles signed him to a minor league contract this spring. He's in the low minors, still chasing the dream. Good for him. 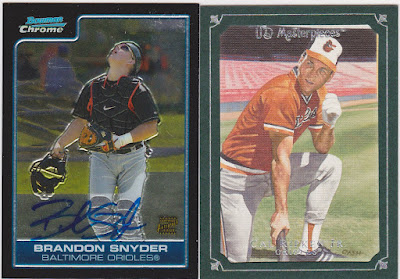 I had forgotten that Sam Horn was a Red Sox player before he was with the O's. I thought it was the other way around. I was losing my hold on big league ball about then so he's really just a name to me. 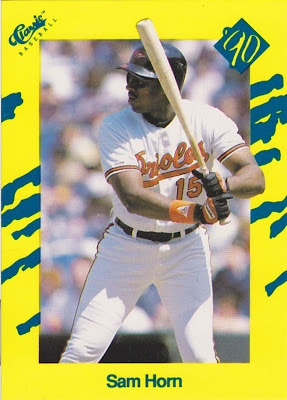 That's an Archives on the left and a Wilhelm Heritage on the right. I love any shot of Hoyt in an O's uni and this is a pic I haven't seen on a card before. 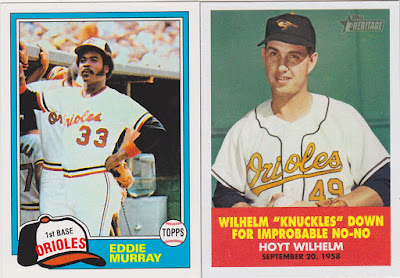 Hunter Harvey is one of the O's top pitching prospects. He's sidelined with arm issues right now. That's not good. The KMart Ripken! Oh that retail boxed set era. KMart no longer exists anywhere I've been in recent years but that was my go-to store when I was on my own for the first time. KMart furnished my first apartment. 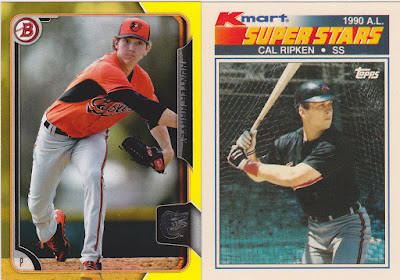 Here are four horizontal ones I scanned together. The Brooksie is a 2015 Topps. If you look in my garage you'll see a file cabinet I used to use in my home office. I covered it with stickers like the Fleer stickers that Shane sent.

If I have one regret as a result of not following the Orioles (or baseball at all) very closely for a stretch it's that I missed out on most of Brian Roberts career. And that's a shame.

Thanks for the cards, Shane. I always appreciate your posts and look forward to many more.