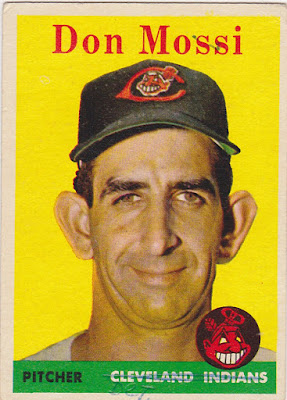 There's nothing quite like cheap vintage boxes at a card show. I visited the local hotel show on Saturday and while it's becoming harder to fill my 1960 needs list there I am always finding fresh inventory in the dollar and fifty cent boxes.

I nabbed about a dozen cards in addition to a pair of 1960 set needs and spent 10 dollars. I can't pass up a Don Mossi card even if it features a handmade 'update' scribbled in ink. I also picked up three Lindy McDaniel cards. The '66 is in pretty nice condition. 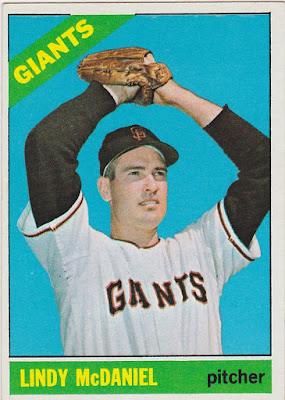 Topps used shots of McDaniel and Cardinal teammate Larry Jackson from the same photo shoot to create 'special' cards in consecutive years. The guys were yukking it up for the camera at the Polo Grounds and the shots turned in in the 1961 set...... 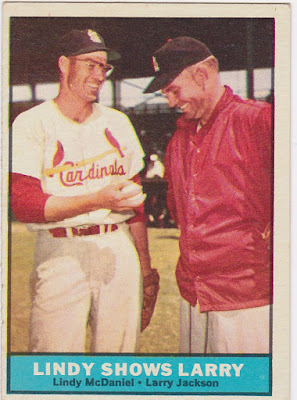 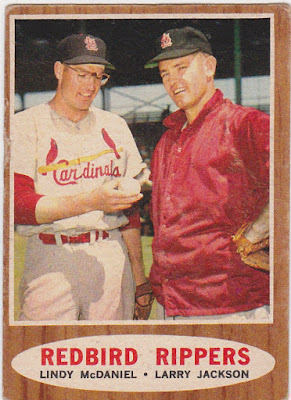 I've mentioned Willard Schmidt in the past. His great-nephew is a Civil War author and blogger and a friend. Willard didn't have many cards (four Topps cards and some regionals) but those that were issued were pretty nice. I really like this 1956. 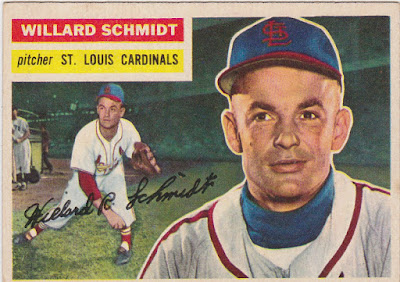 After picking up a Sal Maglie card at the TriStar show earlier this month I've become more interested in him so I was happy to come across this '54 Bowman the other day in a bargain box. I don't think I'll really take a stab at a Maglie PC but I'll grab them if I find them cheap. There are worse habits to have, right? I hadn't intended to put only the cards of pitchers into one post but now that it's worked out that way I'll let it ride. I'll put the other cards I dug up into my next entry. That is if this oncoming tropical depression/storm/disturbance doesn't float all of southeast Texas out into the Gulf.
Posted by Commishbob at 11:28 PM