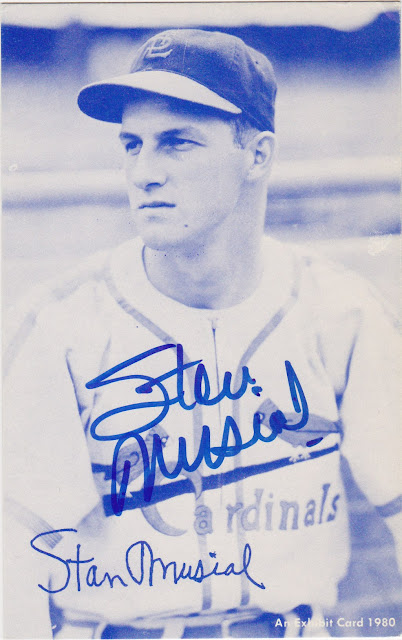 My oldest and best friend is from St. Louis and is about as hardcore a Cards fan as they come, and that's saying something. As Brooks Robinson is to me so Stan Musial is to him. When we roomed together after college we had a dog that was named 'Stosh' in Musial's honor.And through the years (we've been friends since 1971 or so) I've kind of acquired an admiration for Stan Musial, too.

I have some really sweet Musial cards but I never had an autograph. I'm not a huge autograph collector but I think it's nice to have one in any PC and that's what I shoot for.

Musial signed lots of items in his day and towards the end of his life he signed tons of stuff that was sold through his website. He also signed a bunch of stickers that ended up on Topps and Leaf cards and those sigs look terrible. All that combined to reduce the cost (and value I suppose) of Musial items. But none of that matters to me. In fact it helped me find a nice inexpensive sig on an item I really like, a baseball Exhibit card.

This was my other pick-up with my 'extra' PayPal funds. The next thing to dent my budget will be this Saturday's little hotel meeting-room card show. Hopefully I'll find a few cheap 1960 Topps cards. My needs list is steadily dwindling!
Posted by Commishbob at 6:00 AM