Some love for Lindy 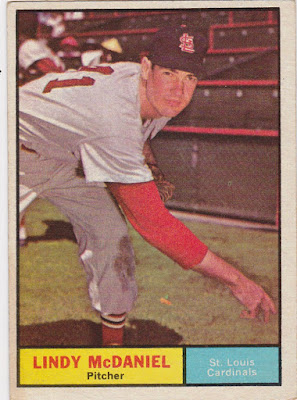 A recent COMC splurge added a boatload of cards to several of my PCs. These are part of my Lindy McDaniel collection.

I've read a lot of negative opinions about the '61 set recently. Maybe it's just the fact that I'm in the process of deciding on my next set project and I'm paying more attention. I dunno. But that '61 McDaniel up top looks pretty good to me. The photo was taken at Seals Stadium in San Francisco, red railings give it away. Take a look at the stands over McDaniel's back. Is that a group of fans wearing dǒulì hats, those bamboo conical hats worn all over SE Asia? 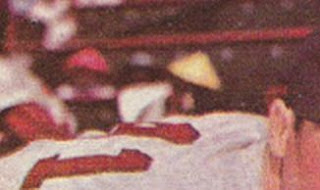 I already had a '59 but I needed one for my McDaniel PC. Actually this is a better one than my original in terms of centering and corners, so I will likely swap it into my '59 set binder. 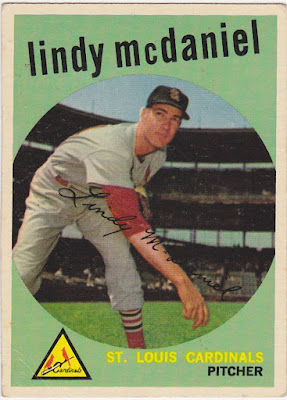 The '73 has McDaniel wearing and undershirt with raggedy sleeves in a Spring Training shot. 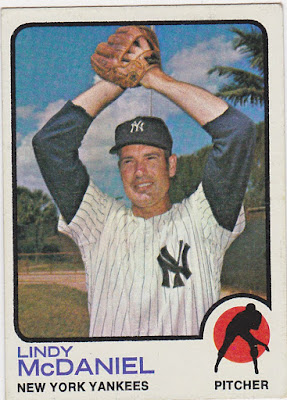 This is the first of two McDaniel cards that Topps put out in 1974. He was part of the 'Traded Set' that year as well. Are those the same sleeves? Same photo shoot? 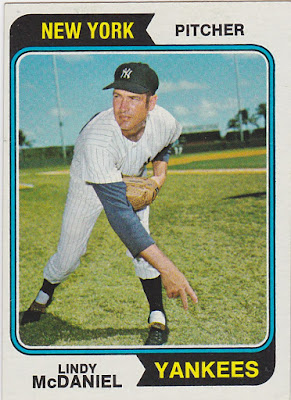 I hadn't ever thought much about that Traded set even though I have a few kicking around. Here is what Cardboard Connection says about them:

The distribution of the cards were two-fold. The entire set was included with the purchase of the first-ever Topps factory set, which was only available at the time through the JC Penny catalog. The cards were also randomly inserted as singles in later-runs of the regular season issue.

My 74T McDaniel isn't in my binder but I have it crossed off my list so I know it's someplace. Here is a 'net image of the card: 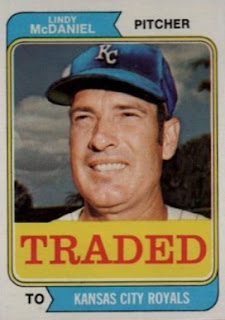 Typical airbrushing job by Topps. The regular '74 is so much nicer.
Posted by Commishbob at 2:15 PM