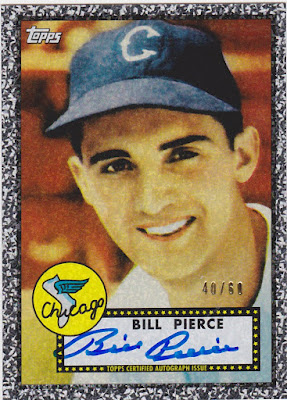 If I'd have thought about it a bit more I probably wouldn't have pulled the trigger on this. Even as a Pierce collector I figure some things are overpriced, and this was one of them.

But I completed a sale of some extra '59 and '60 Topps cards to a guy I met at the Tristar show so I had some money in my PayPal account. Why let it sit there, right? I blew it on a couple of signed items, the first of which is this 2011 Topps Black Diamond card.

I had it on my wantlist but I wasn't really looking for it. I hadn't even seen one and didn't really know what it was until I found one on eBay a few months back. This one was more reasonable so I went ahead and nabbed it.

It's actually better in hand that in the scan but even so it's just a signed reprint that's been all gussied up. The other signed item I picked up was cheaper and probably a cooler piece but I'll hold that one for another post.
Posted by Commishbob at 6:56 PM