A Pair of Franks, a feathered friend... and Don Drysdale

In the rush of craziness that was my month of July one trade package that came my way slipped past me. Chris a.k.a Nachos Grande sent me a Frank Robinson card from the 2011 Gypsy Queen set. It's a special one with a frame and looks pretty cool. The Gypsy Queen art (at least in my eye) is pretty special. I don't see as many "LOL" inducing cards as I do in Allen & Ginter (see Maris Sketch card).

There probably weren't more than a handful of guys as competitive as Frank Robinson. Ever. And I understand he's not everyone favorite guy. In fact I dropped a blog from my daily reading list because of some remarks he made. Petty? Maybe, but why bother with haters?

Here's the card from NG: 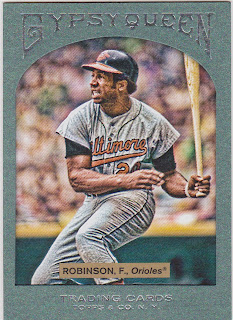 The scan just doesn't show how nice it is. Can't see the frame or the gold letters. Thanks a bunch Chris.
Wasn't long after I got that card that I was at a small flea market type sidewalk sale in Dallas and found a guy with a box of cards. Among the handful I picked for a total of $3 was a different GQ Robinson, this is a Homer Run Hero card and a couple of Oriole Bird Mascot cards from this year's Topps.
This stuff is old news to most of you but I don't have much in he way of current cards so I appreciate having these. 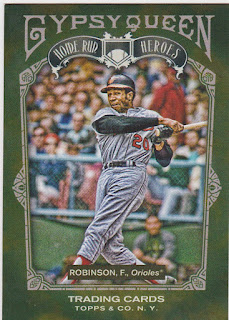 I kept one of these Bird cards and the other is fixing to be mailed to someone who has it on their want list. 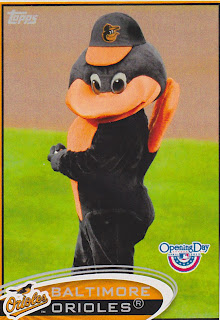 I paid a little more for this 1957 card. It's a rare one in that the scan actually makes it look better than it is. The smiling, youthful Don Drysdale would morph into one of the most badass pitchers ever. I thought about the Robinson/Drysdale combo on the trip home. How'd you like to have been John Roseboro in the early 60's and had the chance to be right in the middle of many confrontations between Drysdale and Frank Robinson? I'll bet he heard some things, no? 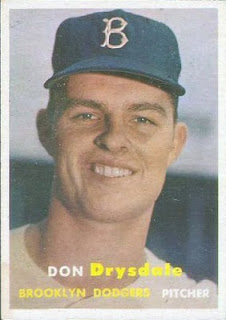 Posted by Commishbob at 8:38 AM