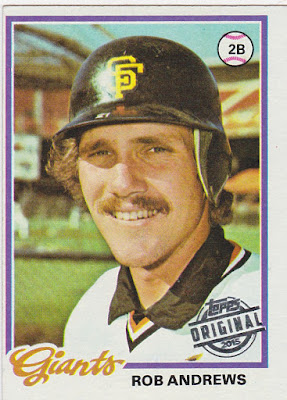 I recently received an interesting group of cards from one of my favorite bloggers, "Joe Shlabotnik" who writes the always entertaining The Shlabotnik Report. (Props to me for spelling it right twice before I checked it!!)

I got a big kick out of the 1978 buyback Rob Andrews. I've always felt a 'kinship' with the guy. Not only do we share a name but we were born just six days apart in 1952. As a bonus he was originally drafted by the Orioles.

Andrews had some very good minor league numbers in the O's chain but with a 25-year-old Bobby Grich (already a three time All Star and MVP candidate) holding down 2nd base the Orioles they didn't see a reason to hold on to him. So Andrews was dealt to Houston where I got to see him play before moving on to the Giants.

He's got about five Topps cards plus a few odds and ends. I have one besides this '78. And it looks like I used nearly the same post title for that one. Might be fun to try and track down a buyback of each Topps card he has.

Next up is a really, really nice 2002 Topps Gallery Frank Robinson card. I know nothing about this set but that sure is a nice piece of artwork. 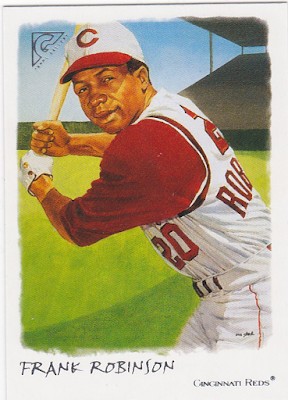 Checking the back Topps gives a shout out to the artist which is nice. 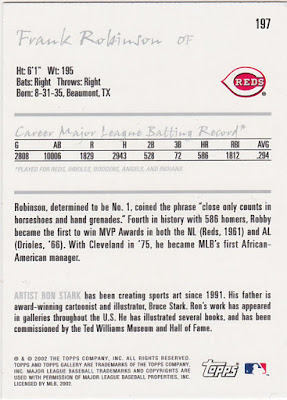 The blurb is hard to read so I blew it up. Ron Stark does some very impressive work. You can check out his website for more.

This next card is of Orioles shortstop prospect Mychal Givens. It's interesting for a couple of reasons: 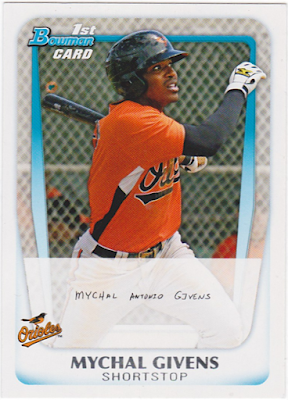 First of all Mychal Givens, a second round 2009 pick, is an Orioles late inning reliever now. He transitioned from infielder to the mound between the 2012 and 2013 seasons.

More interesting is what Bowman/Topps put in this signature space. I'm not sure what to make of it:

It isn't Givens signature which you can see numerous times (as well as read more of Givens' backstory) over on the Great Orioles' Autograph Project blog. It's like someone wrote out his name as a placeholder and they just went with it. <shrug> 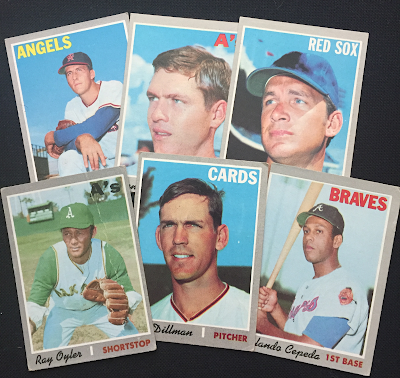 Only the Ron Clark (top middle) was a dupe but even at that it was a plus...I was checking the two copies and examined the back: 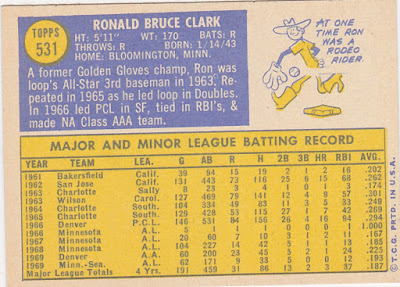 It revealed the fact that the utility infielder was formerly both a Golden Gloves champ and a rodeo rider. Pretty cool.

And finally a couple of Orioles, one new, one old...and a famous Oriole in a weird uni. I'll never acknowledge Eddie Murray as a Met. But I will stick this card in my Murray pages. 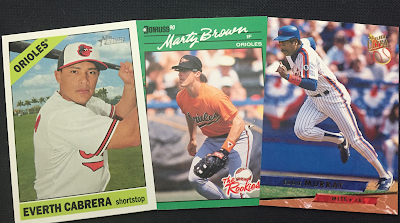 So there you have one of the more notable and offbeat PWEs I've received. Many thanks to 'Joe' for the 'fun-to-investigate' cards!
Posted by Commishbob at 9:25 PM