Alternate Title: I'm About Ready To Deep Six My Scanner 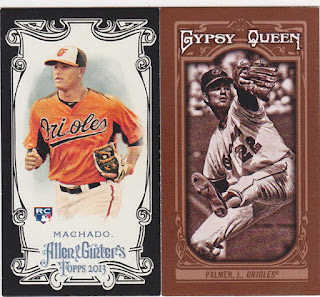 Right after I got the first envelope from Mark Hoyle I received one from Jeff Jones who writes Wish They Still Came With Bubblegum (don't we all?).

Jeff stuffed an envelope with Orioles cards and all but one are new to my collection. Up top are a couple of minis that I really like. I don't think I've ever actually bought a mini card (except for the Topps 1975 versions) but I have received a bunch through trade packages and as inserts when I was buying Allen & Ginter boxes for Gint-a-Cuffs. Last card show I went to I found some pages that they fit into and that solved my biggest mini issue, having them fall out all over the floor every chance they get.

That Machado looks really good with the black border. I'm guessing that's some sort of alternate border. Either way it's nice. Jim Palmer gets the GQ sepia treatment. And I like Gypsy Queen minis more than full sized version. I think the design works nicely in that smaller format.

Next is a Stadium Club Brooks Robinson. I think it's a 2014 SC. I wish the Orioles would break out this 1964/65 look from time to time. I know people think its bland but I love everything about it. 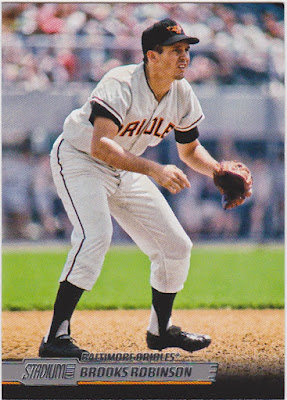 I got a pair of Frank Robinson cards. The first one is a busy thing, isn't it? If my math serves the 50 year logo pegs this as a 2001 card. 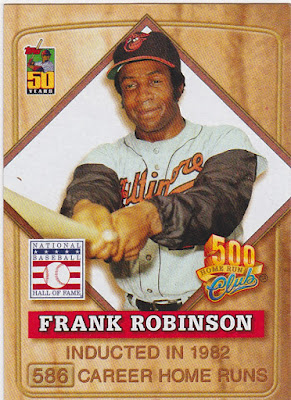 Another Topps insert. I've thought from time to time how hard it would be to actually attempt a 'complete' PC of a player like Frank Robinson. Or Brooks, or Mays, Aaron, etc. Forget 'hard', it would be impossible. Maybe that's why I chase players like Billy Pierce, Bob Moose, Ellie Hendricks and Moe Drabowsky. 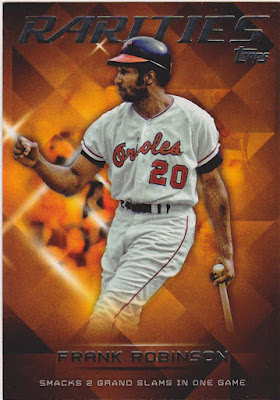 The Bird!! Three different cards of the O's mascot. 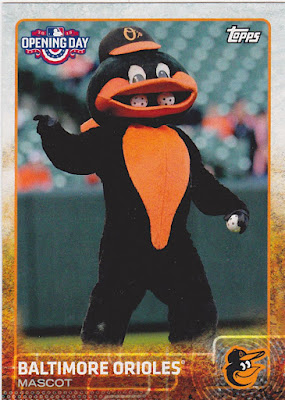 And on these next two you get a look at why I hate my scanner. We can put a guy into orbit for a year, deliver a package with a drone and produce craft beer but we can't get a scanner/printer to scan a whole Topps card. 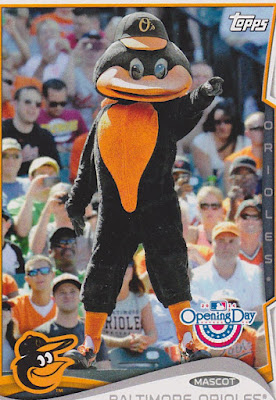 Nowadays when I see The Bird I'm reminded of the time his hat fell off into the dugout and Adam Jones tried it on for size.

people get bent out of shape about the 2016 Topps design but I really like this Manny Machado card. It's the Opening Day set which always puzzles me. How it this different than the regular set? Outside of the OD logo I mean. 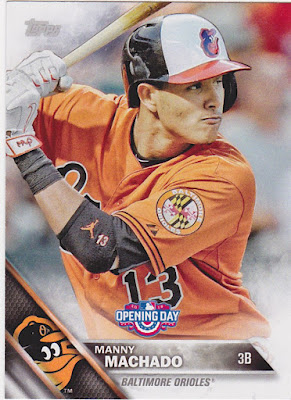 Heritage Orioles team card. O's are off to a good start in '16. I hope I can see a lot more of this type of celebration. 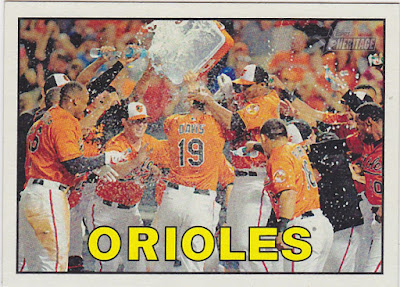 And I'll close out with Kellogg's cards! 3D in all it's glory. First up is the ever underappreciated Bobby Grich. That's a 1977 Kellogg's card. 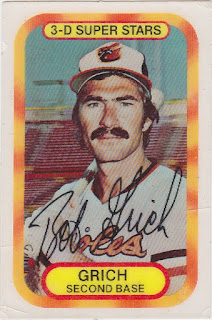 Next, a 1979 Mike Flanagan. I was a big fan of Flanagan back when he pitched for Baltimore. Never had a clue as to the problems he had battling depression. His is a sad story with a tragic ending. 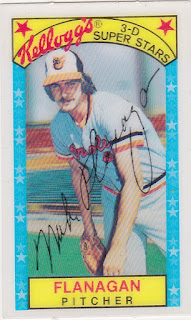 This last one was the only card I already had. At least I think so. Could be that it's just a familiar pose. Another '79 from the shaggy hair era. Nowadays I wish I had enough hair to wear it shaggy. 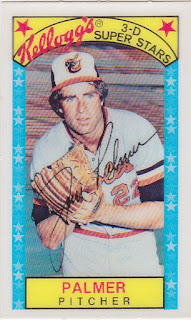 A great package of Orioles goodies. Thanks so much Jeff. I enjoy your blog and I hope you'll continue to read and comment on mine.
Posted by Commishbob at 3:31 PM