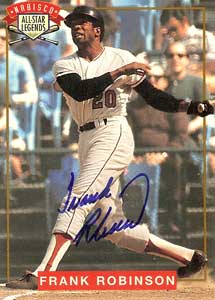 Tonite the Orioles will honor Frank Robinson with the unveiling of a bronze statue at Camden Yards. I wish I could be there. As with any Oriole fan who was aware of the club during his playing tenure I have an enormous amount of reverence for Frank. His arrival in Baltimore in 1966 turned the team into a championship club and a contender for the better part of a decade. He played baseball that way it was meant to be played. I always thought that among his many talents his most valuable was his knack for making everyone around him play better. He was instantly recognisable on the field whether he was hitting... 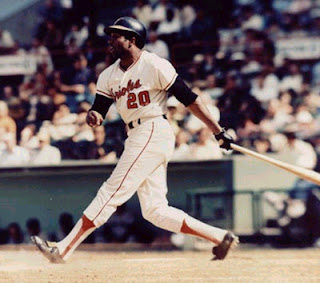 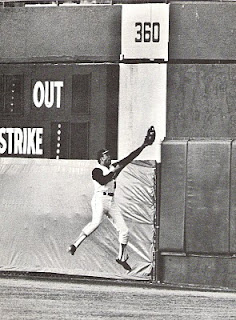 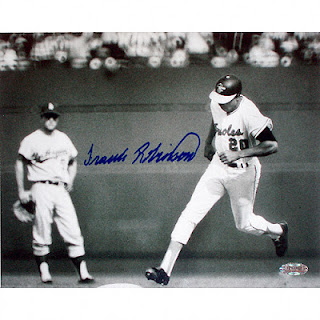 ...he had a certain classic grace and style.﻿

My Dad and I were at Yankee Stadium the night in June of 1966 when Frank made a spectacular catch while tumbling into the seats to save an Oriole win in the first game of a doubleheader. With a two run lead in the bottom of the ninth Eddie Watt put a pair of runners on and was relieved by Stu Miller. Roy White greeted Miller with a drive to right that Frank leaped up for and grabbed while going backwards over the railing.

I had a back cover of Baseball Digest that showed the sequence of him catching it, falling into the stands and getting up. Had it on my wall for years. BTW... Ralph Houk got tossed when he was arguing the call during the lineup card exchange for the second game.

In 1969 I took a banner to Yankee Stadium I painted with Frank's #20. I stood along the rail by the vistors' dugout before the game. A bat boy offered to take it to the clubhouse since we had missed batting practice. Soon after that Frank came up the steps of the dugout with the signed banner, asked who's it was, and gave it back to me. I still have it. 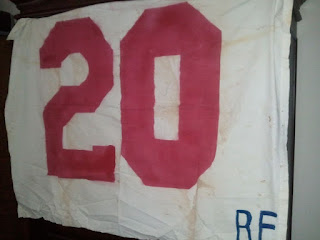 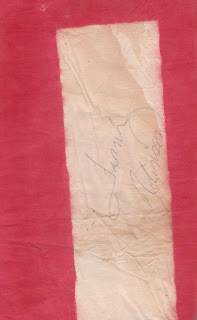 One final Frank story, and my favorite. I was with my University of Houston buddies watching the Cougars play Arizona State in 1972 in the Astrodome. At one point I turn around and in the aisle is a guy who looks just like Tommy John. Dawned on us that it WAS Tommy John, the Dodgers were watching the game right behind us while killing time before their game with the Astros that night. Then we saw that the whole section was filled with the Dodger team and Frank was sitting at the end of my row. I had to go over and say 'hello' and make some stupid small talk about the O's missing him while he signed my football program.

It should be a great nite in Baltimore. Thanks for the memories, Frank Robinson!
Posted by Commishbob at 6:30 AM