My Favorite Year (for the Orioles)

The post title is NOT a reference to the Peter O'Toole movie from 1982 (a fun flick, btw) but rather this is a contest entry post, something I don't often do. Collecting Cutch's Brian asked folks to post about their favorite team's memorable, non-title-winning season.

This was timely (I've been blogging the 1960 set) and untimely (I've been traveling for the last week and haven't been online much). But better 'almost late' than never. As I hinted, the team is the 1960 Baltimore Orioles, aka the Baby Birds. BTW..everything posted here is from my collection. 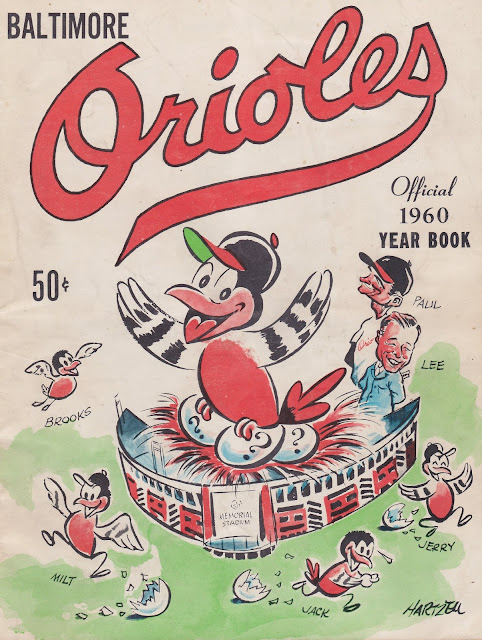 My first live game came in 1959 and by 1960 I was a big baseball fan. I decided that I would have 'my own' team and not follow the lead of my father (and everyone else around me) and adopt the Yankees. Baltimore was where I was born so naturally, the Orioles fit. 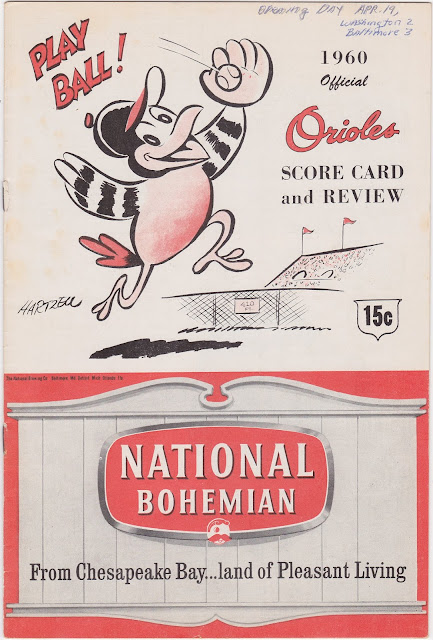 And the Paul Richards-managed 1960 Orioles were the first edition to which I paid close attention. They were also the first Orioles club to compile a winning record and actually be in contention (well, sort of). The began the year well and held the top spot in the AL in late June. July was pretty rough and included a disastrous five-game homestand which saw them swept by the Yanks and Senators. They slid back as low as fourth in the standings, behind the White Sox, Yanks and Indians. 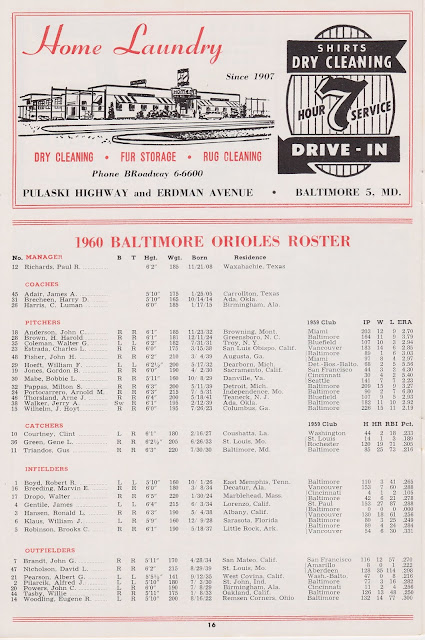 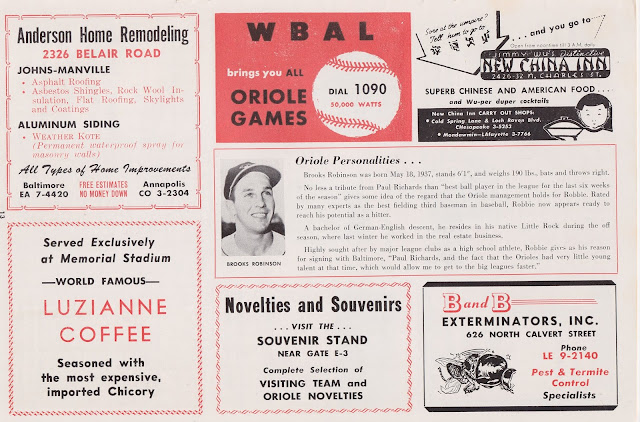 But a young team can sometimes be oblivious to the pressures of sports and the Orioles rebounded nicely and retook first place in August before ending the month just a game back of the Yankees. They continued hot and jumped in front for a while before reality (and that Yankee depth) caught up with them and they faded to second, eight games out. I was there for the September 18th doubleheader that the Yankees swept on their way to a complete, four-game series sweep. That dropped the O's out of a tie for first to four back. Game, set, season. 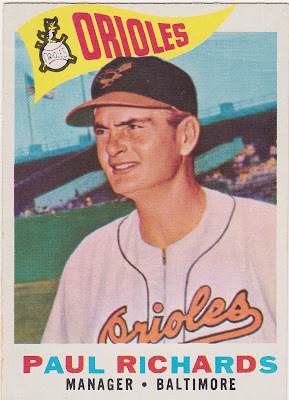 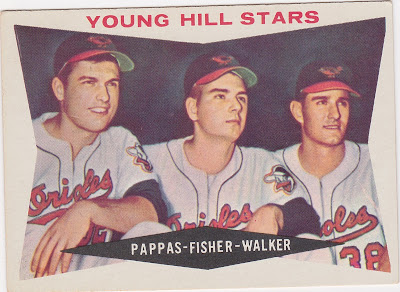 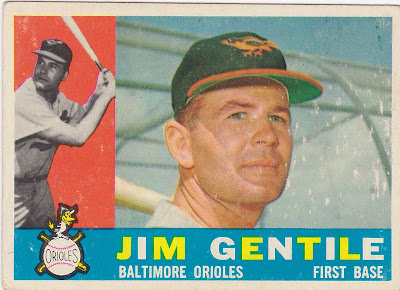 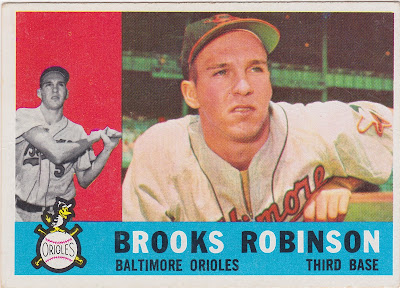 It was a disappointing finish but it was the franchise turnaround which launched them towards the very successful 1966 club and beyond. The team featured 26-year-old Jim Gentile who had been picked up from the Dodgers for cash and some spare parts, rookie Ron Hansen at short, a still-maturing Brooks Robinson at third and a rotation made up of one veteran and four youngsters. That starting staff, Chuck Estrada, Milt Pappas, Jerry Walker, Steve Barber, all 22 or younger (plus 35-year-old Hal Brown), was the main reason for the 'Baby Birds' nickname.

Brooksie, Gentile, Hansen, and Estrada all made the AL All-Star team in 1960 which is quite remarkable given the depth of talent in baseball at that time. 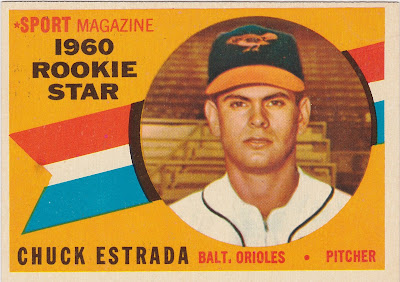 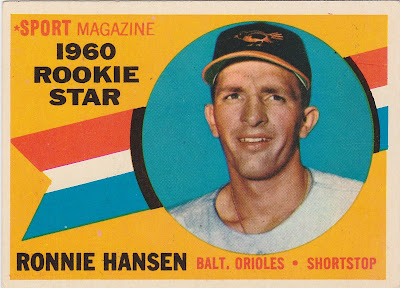 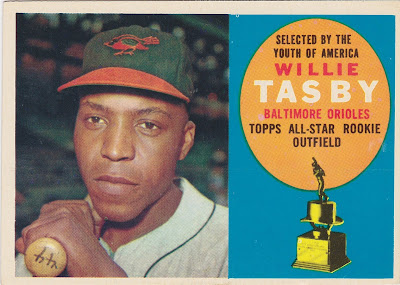 And, as it happens, 1960 was the first year I actively pursued a Topps set. I'd seen '58 cards in the hands of a friend. And I'd received a few packs of  '59s to call my own. But in 1960 I began really asking for cards, keeping them in order in cigar boxes, trading with friends and looking for packs whenever we shopped. I remember the cello rack-packs at E. J. Korvette stores that my father liked to shop in. They also had cards at Bamberger's in Newark.  I'm fairly certain that I didn't complete the set but I remember how exciting it was to hold those things in my hands. Especially the stars and the Orioles!

This has been a fun little exercise. Thanks to Brian for prompting me to take a look back at the beginning of my love for this historic (and sometimes frustrating) franchise.

One last note... the scorecard posted up top is from the 1960 opener which resulted in a 3-2 win over the Senators. Last week, while on family business in the NY area I made spur-of-the-moment decision to attend the Orioles taking on the Yankees on Opening Day in New York. My brother and I braved some very chilly, windy weather (for which I was seriously underprepared) and had fun despite the Orioles loss. 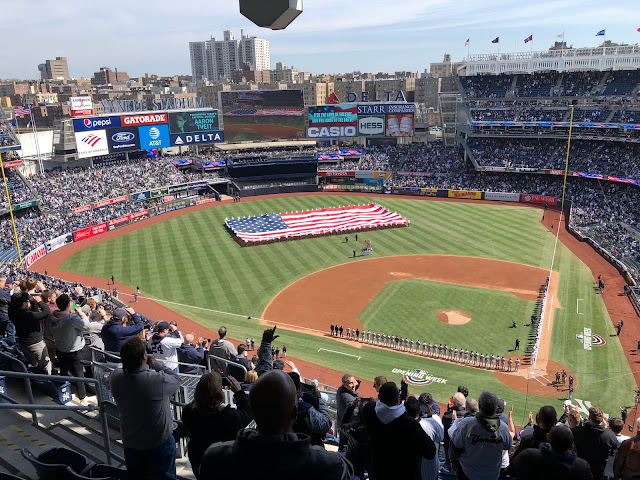 If you need any proof that the decision to attend the game you need look no further than what I wore. Dylan shirt, NYR cap! "Undercover Bird Guy" at his best! 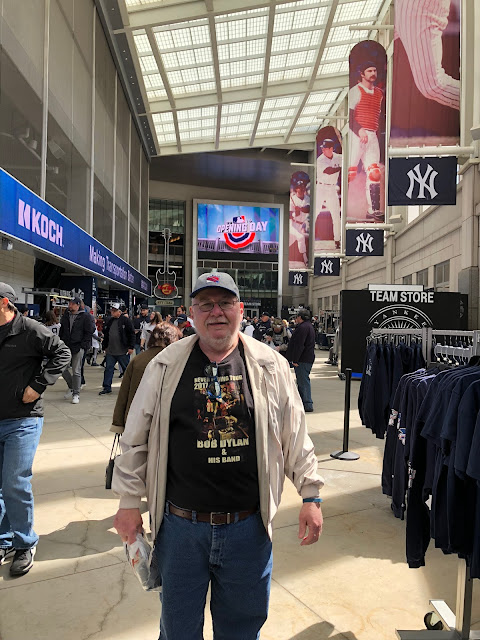 I did manage to find something with the Orioles logo (whatever happened to stadium gift shops that carried all the teams) and changed into it part way thru the game. 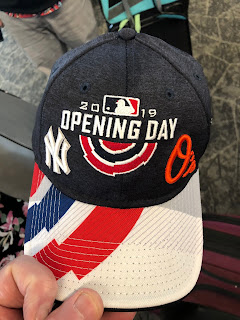 If I could have found some duct tape it wouldn't have had both logos, believe that!