I've stated more than once several dozen times over the years that I am not particularly 'condition conscious' when it comes to my vintage sets. But I do have preferences and, well, limits. And when you assemble sets using a good sized 'starter' lot you always end up with a certain percentage of stinkers in the mix.

Issues with corners, centering, creases, marks, and paper loss might or might not cause me to decide that I need a better copy of a card. I don't really have a formula that tells me 'this card goes over the line' or anything like that. It's just a gut feeling. This is where I usually paraphrase Supreme Court Justice Potter Stewart famously said in the Court's 1964 ruling on an obscenity case.. 'I can't define it... but I know it when I see it'.

That's how it is for me when it comes to upgrading or no upgrading. Condition X doesn't automatically trigger my eBay finger, nor necessarily does Condition X + Condition Y. But when I'm flipping through a binder I'll pull a card that just looks 'wrong' in the slot.


I got the ball rolling on my 1960 build a few years ago with a nice 200+ card purchase from eBay and was pretty pleased with the results. Oh, there were a few dogs in the mix, but overall I had no complaints. I received this '60 Nellie Fox All-Star as part of the lot. He managed to stay in his slot for about three or four years until the terrible back of the card got to be too much for me. Observe... 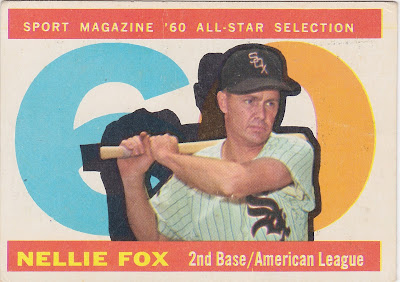 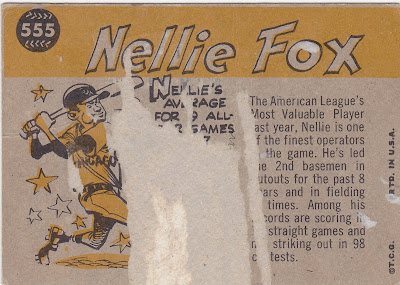 That's pretty brutal. But the back side is where the damage was so I managed to ignore it, at least until recently. When I pulled it to look at it in hand I noticed (again) that the back was so damaged that the cardboard loss goes almost all the way to the front of it. Not good. So a few weeks ago I found a better one. These are not very costly and I really, really like the design so I don't know what took me so long to get a better one.... 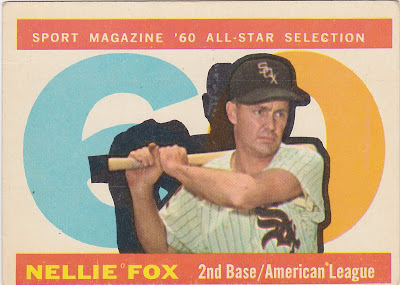 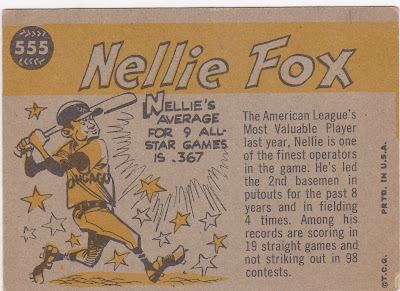 That's much better. Off-center? Sure. But I'll take it. I have two or three commons that probably could stand a bump but they will do for now.

Posted by Commishbob at 7:24 PM