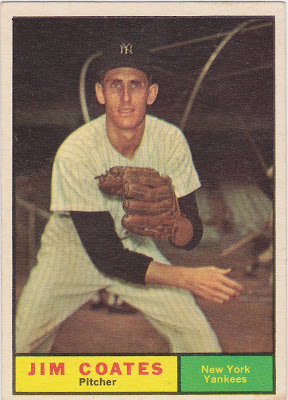 It started with a bindered lot of 250 cards or so that I grabbed at a hotel card show a few years ago. I really didn't know what I was getting into ("Hold my beer!" -'71 Topps) and it ended this past week with a couple of different deliveries.

The Jim Coates card above was the last purchase I made and closed out my want list. I ended up with a better card than the one I had been eyeing for not much more money. This (relatively) better-centered one was only a few dollars more than the one I had almost purchased. It still carried the 'Yankee Tax' that plagues most vintage card chasers. This one, the Bob Cerv and Rollie Sheldon cards in the high number series cost more than their non-Yankee cousins. Just a sad fact of a collector's life.

That Coates might have been the last one I needed to buy but it wasn't the last one to fill its spot in the binder. This one was... 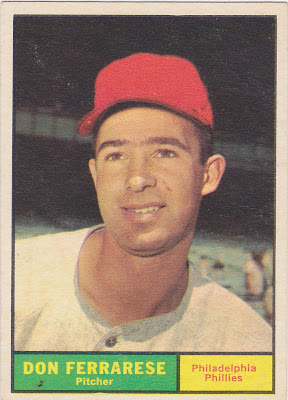 Don Ferrarese's card came from a COMC buy I made earlier this spring but held off on shipping as is my habit. It only makes sense to me to wait until I have enough purchases to make the $4 shipping reasonable. The card (and his traveling companions arrived in yesterday's mail. I was pretty excited to slide this one into its slot. Card, Page, Set!

Ferrarese, now 89 years old, pitched for five clubs over eight seasons (including three for the Orioles) and won 19 games. His lasting legacy, though, is his charitable work including his foundation which provided scholarships to promising kids. Very nice.

He wears an obviously airbrushed cap in this photo. He was dealt to the Phils in April of 1961 and Topps had time to get his team correct even though they didn't get an updated pic. That's Yankee Stadium and he could be wearing White Sox, Indians, or even an Orioles uni.

Nice to have this thing behind me. I will do my 'upgrade census' at some point but I already know that there are not many that need to be included on that list. There are a few variations in several checklists but I'm not too concerned with them. Checklist variations fail the 'Would Bob have noticed in 1961' test.

Now it's time to start seriously dealing with the last 45 or so cards I need from the 1971 set. I may throw a party when that thing is done!
Posted by Commishbob at 11:43 AM