Three Yanks and a Buc

OK, that title is sort of weird. But it describes what I'm lacking in my 1961 Topps chase. The cards I need are:


All are high numbers, obviously. The three players are Yankees and then there is the Pirates team card. The Yankee 'tax' is pretty strong. None of those players are stars. There were no formal 'short prints' in the high number series as far as I can tell. At least nobody describes them as such. But the grading services have population reports that show the number of each card submitted for grading and the Sheldon and Cerv seem scarce. The Pirates team card gets a 'defending champs tax' I guess but I'm not sure it should.

Bottom line...these are proving to be difficult to find (in acceptable condition) without busting my budget.

Meanwhile, back at the ranch, I've reeled in the last All-Star card I needed, Willie Mays. 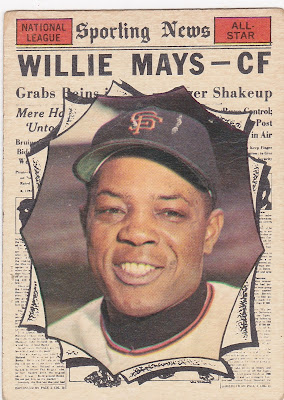 It's not a terrible card but that is a scuff on his cap and the corners are softer than my Texans' defensive schemes. But the price was right and it certainly fits into my 'acceptable' range for the set.

And it fills the final full page in the binder with a boatload of talent. 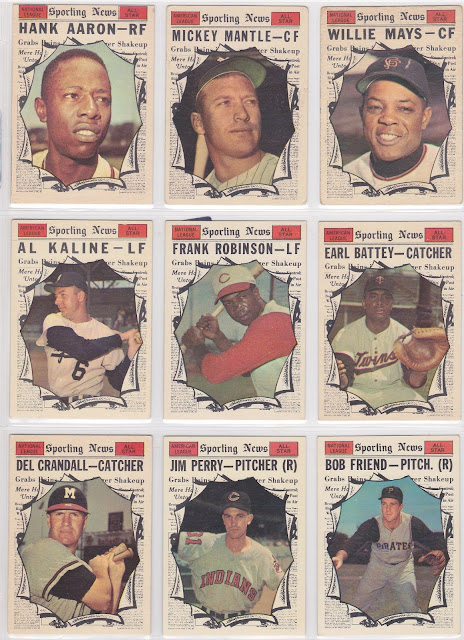 If my math is right the page represents: 102 All-Star selections (and I didn't count the twin ASG game years as two selections), 8 MVP trophies, 34 Gold Gloves, 5 Hall of Fame players, 2 Rookie of the Year selections (and a couple of runners-up), 15 World Series rings, 4 batting titles, an ERA title, a Cy Young Award, 412 pitching wins and 3219 homers.

And to get to this point these high numbers came my way in recent weeks. These were from COMC I think. 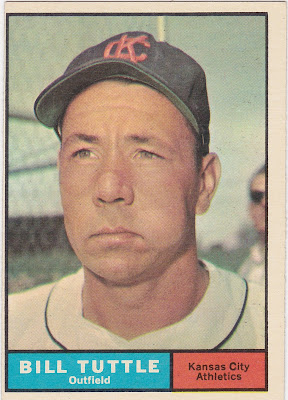 Bill Tuttle was rarely photographed without that large hunk of chewing tobacco in his cheek. Later in life, he paid a huge price as mouth and throat cancer took his life. He spent a good bit of his last years as an advocate against the use of chewing tobacco and dip.

There is a thread on Net54 about 'centeredness' (probably many threads) and one comment made was 'off-center cards give me the shakes'. 😏 I, on the other hand, have no problem with this Tuttle. It goes back to my feeling that "if it came out of a pack when I was 9-years-old I wouldn't have even paid any mind" attitude. The only thing that gives me pause is when a card shows some of the one next to it.  There's a Jim Coates on eBay cheap right now that has tempted me but the discount isn't big enough to get me to overlook that flaw. 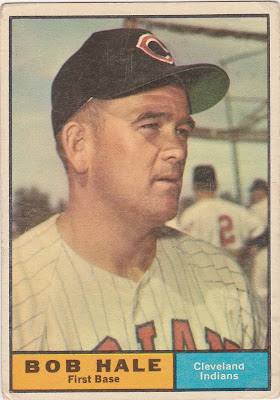 Bob Hale was at the end of his career. He'd began as a first baseman for the Orioles in 1955 but mostly served as a pinch hitter for the Birds, Indians, and Yankees thru the 1961 season. 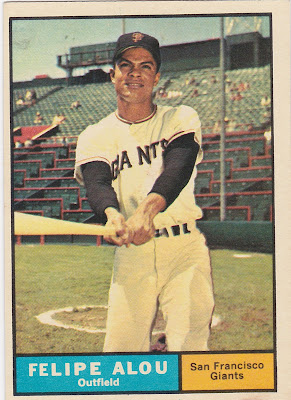 I really like this Felipe Alou card. He's in Seals Stadium. He really came into his own in 1961 as he hit .289 with 18 homers. The next year he made his first All-Star squad and helped the Giants make the Series. 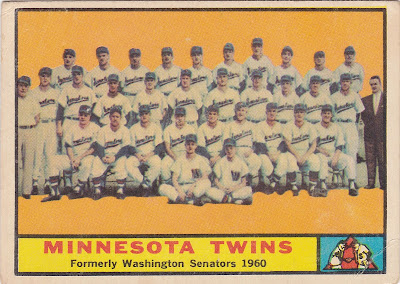 This is the first official Twins team card. As noted on the front they were formerly the Senators and you can see that name on their unis if you look close. The new edition of the Senators, the expansion version, as well as their counterparts, the L.A. Angels, didn't get a team card in 1961.

Posted by Commishbob at 5:28 AM