Between a couple of hotel shows, the TriStar show and some online purchases, I've accumulated a bunch of  'stuff' that covers a wide range of my collecting interests. I have most of it scanned, but little of it posted. This will keep me occupied for a few weeks. 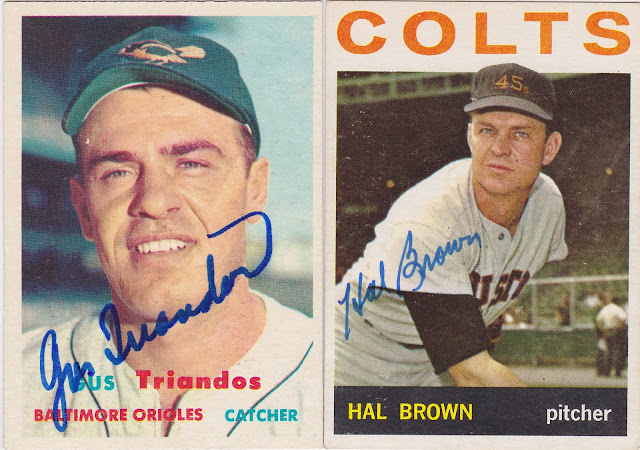 From Net54 came a pair of un-connected lots from the same seller. This one, obviously, was a group of signed vintage cards. Now I'll admit that I'm not much of an autograph guy. But when a grouping of them comes cheap, has cards of Orioles, players I semi-collect, and/or come from sets I have chased, I'm gonna buy it.

I'm going to crank up my '57 chase once I finish off the stuff I'm doing now. But I bought a fair sized starter lot some time back and I add to it if something falls in my lap. Add to that the fact that one way I spice up my vintage sets is sprinkling in a few signed cards, and the Triandos is a natural for me. And as a bonus, it's nicer than the one I would have yanked from my old Orioles team set pages.

Hal 'Skinny' Brown pitched for several clubs but had his best seasons as an Orioles starter from 1956 through 1961. This '64 card is from his last season in the bigs. That's the Polo Grounds behind him, I'm 99% sure of that. I don't plan to collect the '64 set but there are worse ways to spend hobby money, I'll say that. 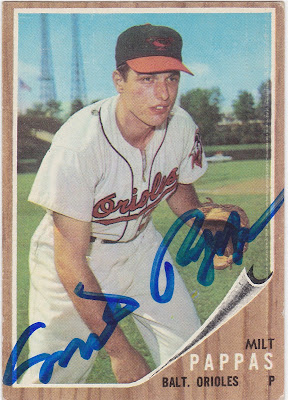 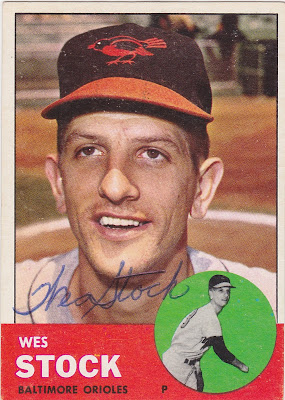 A few years ago I made a halting start on chasing the 1963 set. Considering how much I was into it as a kid in '63 (it was right in the heart of my collecting days) I'm surprised that it doesn't really inspire me these days. 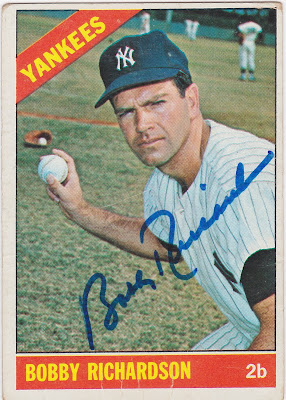 I have a couple of Bobby Richardson signatures but this is the first on a real card. I saw so much of him at Yankee Stadium back in the day. If I had a 'favorite' Yankee list, he'd be at or near the top. 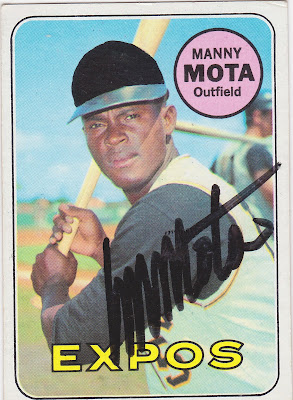 Manny Mota just sort of came along for the ride. Too bad he got an airbrushed helmet instead of a pic in that spectacular Expos uni in their first year.

That's the first load from my backlogged scan file. And the last baseball cards to be shown from it. The rest are spies, cars, presidents, actors, and oddities. I know you can't wait.

Posted by Commishbob at 9:59 PM