I thought I had my 1975 Topps set completed but no, it can't be that damn easy. I  bought the final card for it from a seller on eBay who I've bought from before. One of those folks with tons of sales and positive feedback.

The card I needed was the Yount rookie. Not hard to find but I was doing my usual thing with it...waiting to find one that was in acceptable shape at a decent price. We all do that, right?

Anyway, I found it and as expected it arrived within two days since the dealer is located just northwest of Houston. Here are the pics from the eBay listing.: 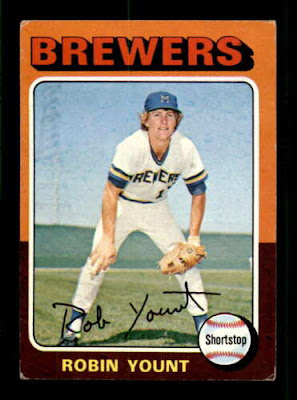 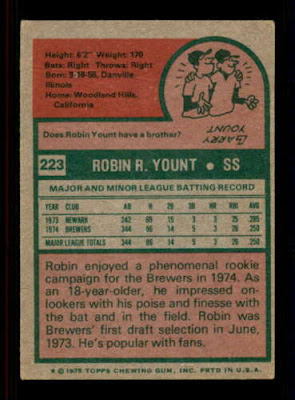 As soon as I pulled it from the packaging I knew I had a problem. I've handled enough cards in my time to be able to tell that this one wasn't right. Now, I've accidentally bought 1975 minis on COMC because I sometimes shop too late at night and really should be sleeping, but that wasn't the case here.

Just to be sure I placed my Yount on top of a standard card and sure enough, it was trimmed. Now my standards are not perticularlyhigh, especially in light of how tough it can be to find really great cards for this build (and the 62 and 71, sigh), but I'm not going to put a trimmed '75 in my binder when I can find a 'whole' card at a similar price with a bit more work. If this was the last card star I needed for a tobacco set that would be a whole different story. 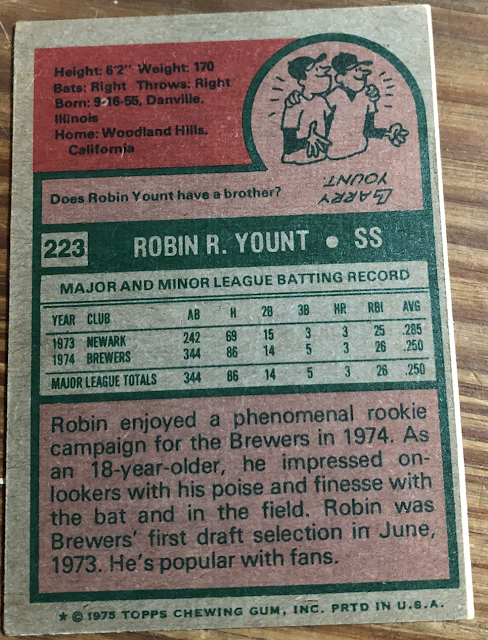 So I sent the pic to the dealer and within a few hours, I had a return invoice sent my way with ample apologies. The dealer received the card yesterday and my refund should be here at any time.

I wasn't angry about it. As I mentioned, I have bought from this particular dealer in the past and wouldn't hesitate to do so again. I was just disappointed that the baby I thought I had put to bed was suddenly sitting straight up in the crib and screaming for attention.

Such is the life of a collector.
Posted by Commishbob at 7:44 PM