First up, a nice, creased, somewhat frazzled Mantle Exhibit card. It's a 1951 photo/issue (the AL 50th anniversary patch was worn that season) from the 1947-1966 checklist of Exhibits. It was a spur-of-the-moment purchase from a Net54 member. It was a package deal that included a Campy that turned out to be a reprint I'm afraid. I decided not to make a fuss over it since I like the Mantle. 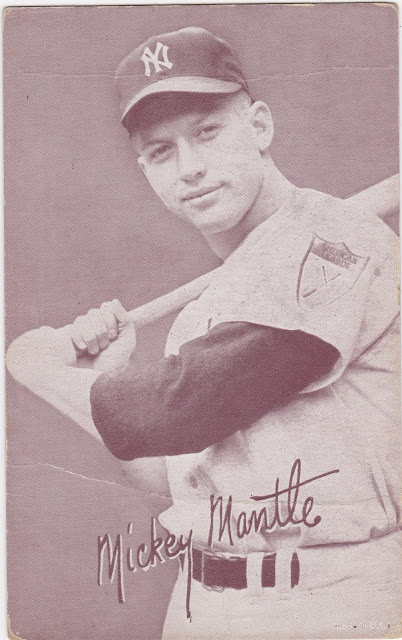 This next one is actually more exciting to me.

I wanted to find a Mantle stamp for the Yankees page in my '61 Topps Stamp Album. But Mantle stamps are silly expensive (like a lot of Mantle stuff). I could see myself paying a ton for a little stamp. But this one, flawed as it is, was cheap and will do just fine. It already sits in the album and brings me one small step closer to finishing that project. You can see my wants over in the sidebar.

Sorry for the glare. When you take a picture at 2:30 a.m. you don't retake it because of a little glare. That's my man, Elston Howard, under the spotlight.

Posted by Commishbob at 2:33 AM