Settle down over there, Mark Hoyle...this post is NOT going to be about Dan Osinski and Joe Foy. No, I'm asking (myself, probably) a question I have thought about more than once in recent years. And it's one that was asked recently by someone on Twitter. 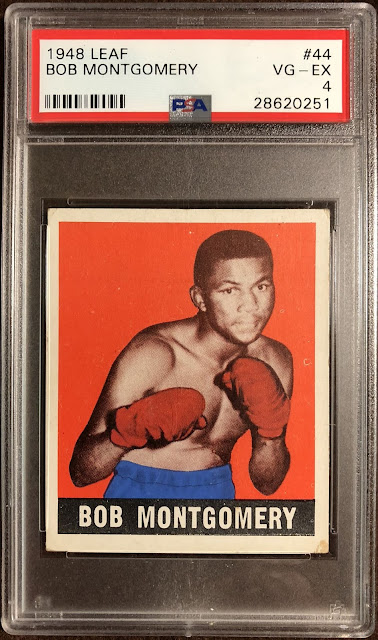 The question is "Would you chase a set that you have no hope of completing?" I'm thinking mostly about vintage sets here but it actually could apply to modern ones as well.  Many collectors have picked up base sets of current issues and don't bother with the inserts, hits, parallels, etc. Or they pick and choose what is important to them. But that really comes under the header of  'what is a complete set?' which I defined for myself when posting about the 1962 Topps baseball set.

Here I'm thinking more along the lines of sets like the '52 Topps, the iconic T206 set and others like them. The 1952 Mantle, unless you will accept a copy the looks like it was run over by a bulldozer and put in the washing machine, could set you back more than your car did. The same holds true for the T206 Wagner, some other Mantle, Ruth and Mays cards and many, many others.

My most recent cause to debate this with myself was a nice lot of 1948 Leaf Boxing cards that were being auctioned.  I grew up around a grandfather who had two interests, I mean outside of working long and dangerous days as a pipefitter at the Brooklyn Navy Yard and spoiling me rotten .....Friday night TV boxing and Mitch Miller's music.

From watching the fights on Friday nights with him I developed an affinity for the sport that has waxed and waned through the years since. There are two boxing sets that I really dig, the 1951 Ringside and that 1948 Leaf.

I've considered trying to complete the Ringside set from time to time. I have a handful and even with the few SPs and a tough card or two, the set is easily within reach of a dedicated collector. The 1948 Leaf? That's a different story. There are 50 cards, skip-numbered to #102. 49 of them, the 'originally issued' 49 are relatively easy. Not cheap, some of them, but not tough to find in decent shape. It's really an outstanding set, what with the colorful fronts that parallel the Leaf baseball cards of that era and the checklist full of stars. But, oh, that 50th card!

The Rocky Graziano is simply impossible for the average (and above average!) collector. It commands astronomical prices and is almost never seen in the wild. According to the article I linked to at PSA there have been less than 10 copies that have surfaced.


This one is not mine. LOL 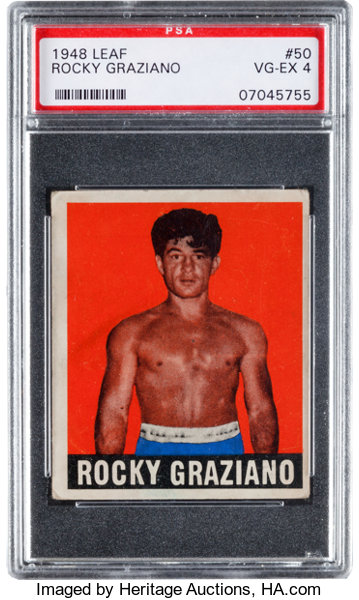 Again, as that PSA article states there is no definitive story as to why the Graziano card is so hard to find. Obviously, it was not issued along with the rest of the set. Test issue? Unauthorized?  Nobody is sure. But to me, it is part of the set until I find out differently, with evidence. Which means that a set without it is a nice 'collection' of 1948 Leaf Boxing, but not a 'complete set'. The backs are awesome as well. Love the write-ups and stats. 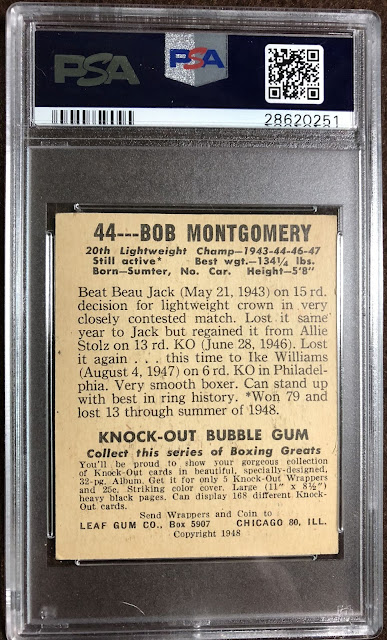 Hey, I'm the first guy to say 'collect what you want, a set is what you want it to be'. I have the Baltimore players from the T206 set and some others. That's not chasing a set. It's just picking up cards I like/want. I now own about four cards from the set including that Bob Montgomery above. But for me, looking at the 49 attainable 1948 Leafs in a binder and having the empty spot where the Graziano would be is just not something that interests me. Now if I saw proof that the Graziano was just a 'test' issue or maybe produced for a family member I'd reconsider and call the set 'complete' at 49. Then you'd better believe the chase would be on. Your mileage may, of course, vary.

Posted by Commishbob at 4:25 PM