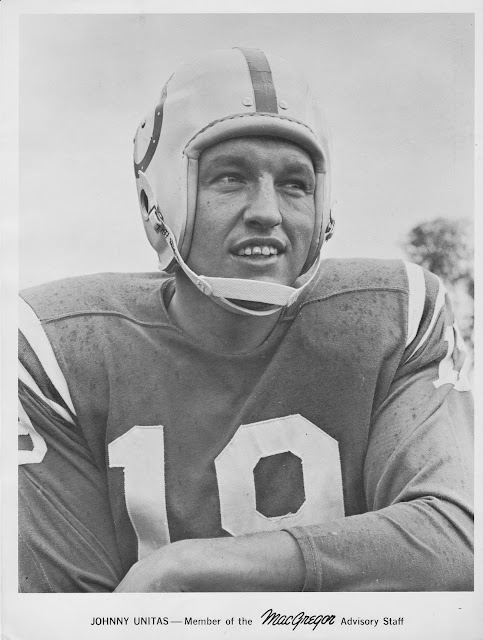 Thanksgiving weekend means football. And while I rarely spend much time watching football on TV I will admit to vegging out on the couch after our meal on Thursday and catching some NFL action. I do enjoy the in-stadium atmosphere and I'm looking forward to being at NRG Stadium Monday night for the Texans-Titans game.

I was much more of a TV sports guy back in the day. I always hoped my Baltimore Colts were on the tube which meant watching John Constantine Unitas. What could be better than that?

I've seen this MacGregor Advisory Staff pic on eBay for years. Always too costly. I finally found this one reasonably priced a few months ago.

I'm sure JU never played a down of pro ball without a facemask. But when posing for these endorsement shots most guys went helmetless or without the facemask. There are only a few football MacGregor photos. I've seen Mike Ditka, Bart Starr, Joe Namath, and Sonny Jurgensen. I'd bet there are others but there are many more over on the baseball side. 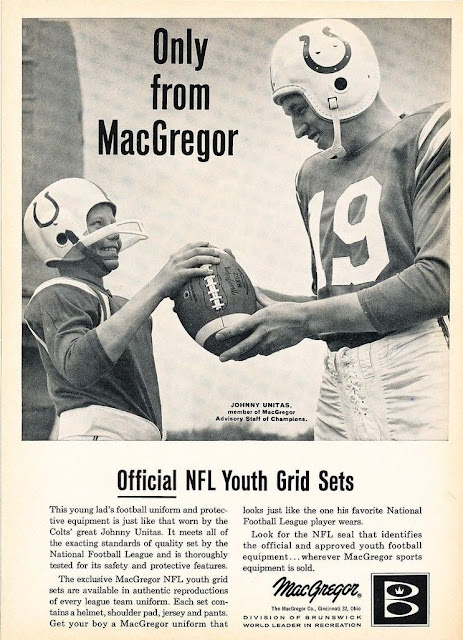 Unitas shows up in this helmet again in this wonderful MacGregor ad found in a 1961 NFL game program.

BTW...the Advisory Staff photo has full borders, my scanner ate most of the one on the right side.

Posted by Commishbob at 7:44 PM