So who sez I don't post-baseball stuff? Check this out: 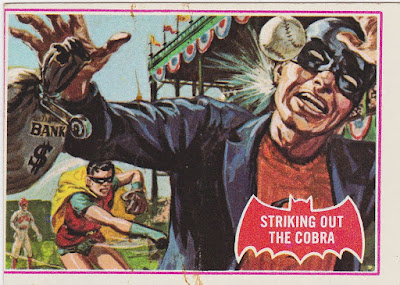 Yup, Robin has a nasty high, hard inside fastball. That's card #27A of the 1966 Topps Batman Puzzle-back series, aka, the 'red bat' set. I posted about my black bat set some time ago. Topps was all over the Batman mania that prevailed in the mid-1960s, in 1966 specifically. They released five Batman sets that year, six if you count the two different styles of 'blue bat' set card backs. More on that in a bit.

Batman collectors tend to migrate to the black bat set as the best of the cartoon-style bunch. I can't disagree. It has the sharpest artwork and the backs are really nice. But Topps piled on with these two similar sets. I recently completed them both.

Before moving on I must address the condition of these. Like all the vintage non-sports sets I have, I am perfectly happy to pick them up in less than pristine condition. It would be neat to have gem mint Batman sets but that's not a priority with me. What I have come to learn as being 'collector grade' is just fine. Cards in one piece, creases not too obvious, decent corners, minimal extraneous marks....I'm good to go.

Both the red and blue sets are made up of 44 cards. They also both come with backs that form puzzles of various characters involved in Batman's world. Both sets are also primarily made up of horizontal cards with a mix of vertical ones.

Here's the back of the card up top: If you can read the small print on that card back you can see that the puzzle was formed with six cards. The villains were all six-piece puzzles while out heroes got bigger, 10 piece puzzles.

Here are a few more of my favorite cards from the set. Hard to beat mixing in the Statue of Liberty! 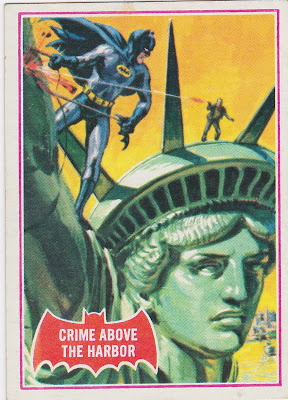 I guess Gotham City has a 'Broadway', too. 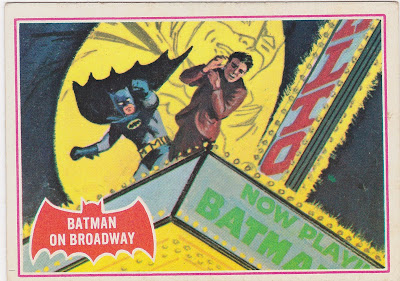 Why would a ghost wear glasses, other than to better visualize him in a cartoon? 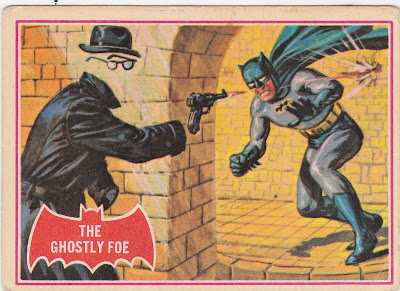 And a shapely damsel in distress. 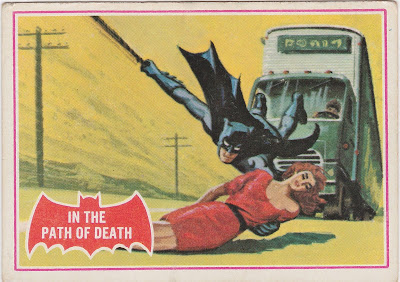 And here is a look at the Joker puzzle when it's put together: 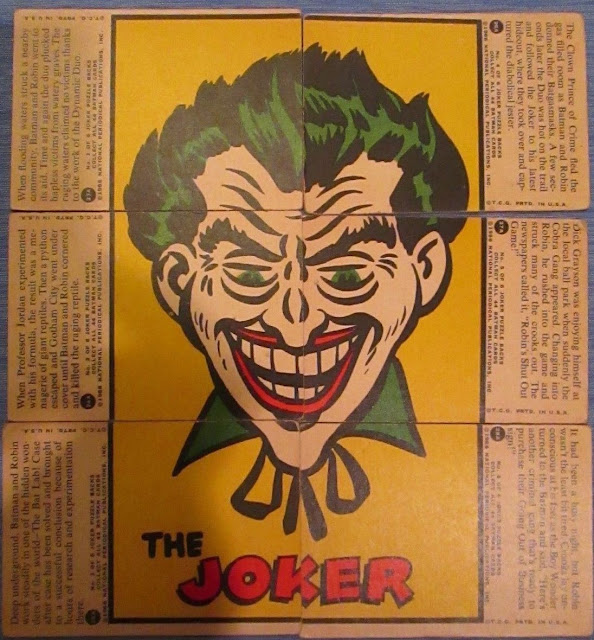 The blue bat set was the third of these cartoon art sets of 1966. It's also the weakest in terms of artwork. But no Batman art is bad Batman art. It was numbered as 1B thru 44B. 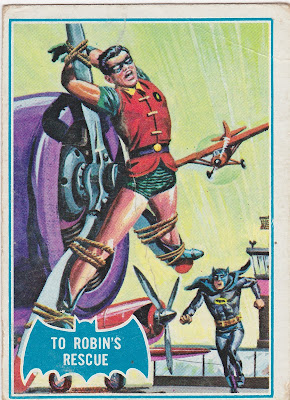 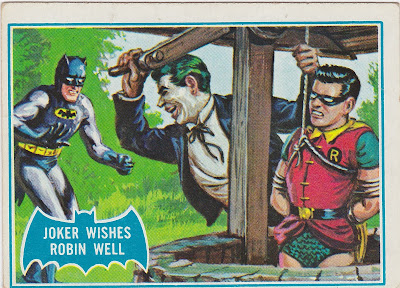 Again with the puzzle backs. 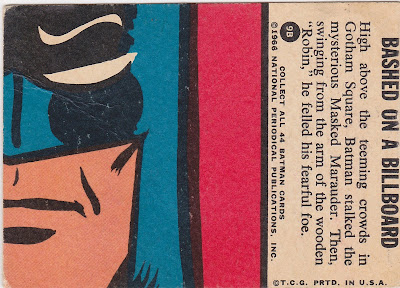 Robin gets to work his arm again in this set. 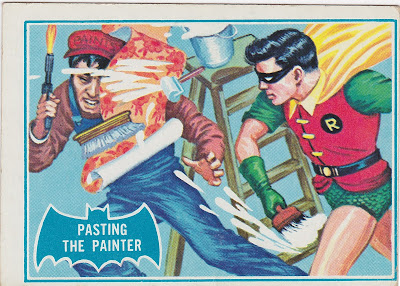 Here is the variation mentioned above. This blue bat series was also issued with these backs: 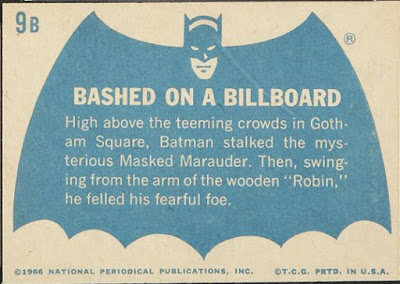 They are called the blue cowl backs and I much prefer them to the puzzles. I picked up a couple of these cowl backs on COMC just as 'type cards' and I'm fighting the urge to chase the whole thing.

The two different back from the #9B card, side-by-side:

I mentioned that Topps had six Batman issues in 1966. Here are cards (not mine) from the other two. These used photos from the TV show and the movie. The Batman Laffs set had TV pics... 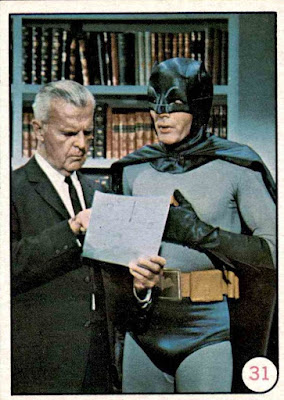 The Batman/Riddler set was based on the movie. 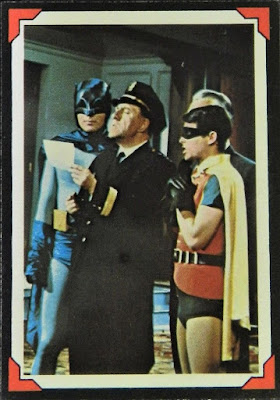 The three cartoon-style sets, black, red and blue, were re-issued in 1989 as a 'deluxe' set of 143 cards. I was unaware of that until recently and mine is now in route. I really haven't given much consideration to the two 'photo front' sets. I was a Batman comic guy and the show, while entertaining, wasn't something I really went out of my way to watch after the novelty wore off.

That doesn't mean those two sets don't appeal to my 'completist' side.
Posted by Commishbob at 8:00 AM