In my previous post featuring the '62 Willie Mays, I mentioned that these three posts were of cards I'd wanted for awhile. That's not technically true in the case of this '54 Ted Williams card. 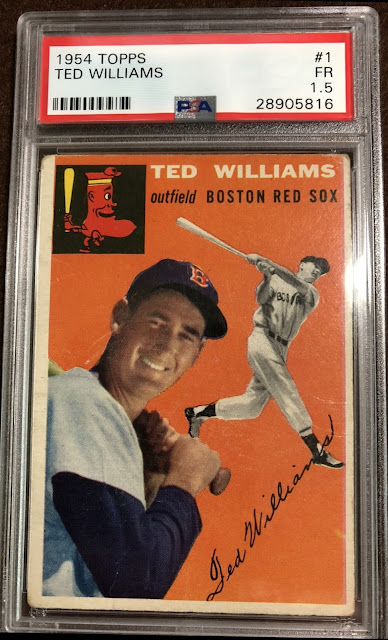 What I HAD wanted was to upgrade my 1958 Ted Williams card. From time to time I had hit the usual places looking for a nicer copy at an affordable price. I pretty much knew that wasn't going to happen but whatever. During one of my visits to eBay, I came across this Ted from 1954...the #1 card on Topps' checklist for that year's set. I'm thinking it popped up because I did my search for 'Williams #1' since the '58 Williams is also card #1. 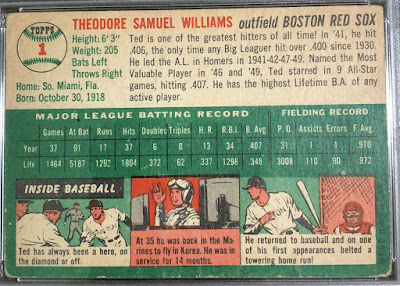 This one (its one of two Teddy Ballgames in the '54 set) had a really decent price so I put it on my watch list. The more I thought about it the more it made sense to forget the '58 upgrade. If I did find a better '58 Williams it probably wouldn't have been much of a bump given what I hoped to spend. And in the end, I would have two mediocre copies of the same card.  So when eBay did one of their 20% Off days I grabbed this '54.

It'll probably stay in the shell because I have nothing to gain by breaking it out. Looking at the back it occurred to me that when I was growing up I loved cards with full career stats on the back. But now that stats are so easy to find anywhere I'm happy that there were wonderful cartoons like the ones on the back of this great card.


The third and final post of these graded cards will feature a card of an iconic player whose absence in my collection had bugged me for an awfully long time. I'll get that one up early in the week.

Posted by Commishbob at 1:00 PM