I really enjoy oddball baseball stories, especially when I have a card to go with the story. And that's the case with this Memo Luna card from the 1954 Bowman set I came across in my collection a while back. I remember when I first saw this card that I couldn't figure out what made it different until it dawned on me that Luna's name was not in the 'signature' style of the rest of the set. He got plain sans serif type. 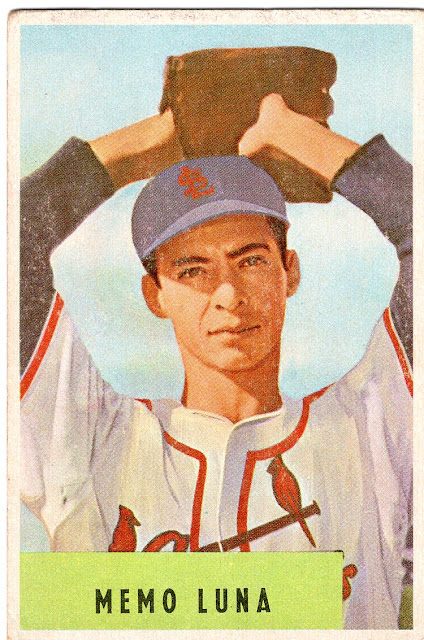 Guillermo Romero Luna was a 21-year-old phenom out of Mexico when he signed with the old San Diego Padres of the PCL. He debuted stateside in 1949. He'd won 52 games in three seasons in Mexico before he came north. As the back of the card notes Luna was a multi-sport star growing up.

He spent two years with San Diego before being acquired by the Cardinals in September of 1953 for three players and $75,000. The understanding was that Luna would pitch a bit that winter in Cuba and then return home to Mexico to rest his arm and await his first spring traing as a major leaguer.

Instead of resting after being shut down for the winter Luna cranked it up in the Mexican winter league, blew out his elbow in a February start and was never the same. Luna, who featured a curve, slider and knuckleball, had a poor spring but managed to make the Cardinals '54 roster and drew a late April start. In that game against the Reds he was KO'd in the first inning and sent down to Rochester, the highest ranking of the Cardinals 22 affiliates. Yes, the Cards had 22 farm clubs in 1954!

Luna had respectable numbers in Rochester (although a losing record) but he slipped down the ladder in the Cardinals' chain and eventually ended his career back in the Mexican Leagues in 1961. Although he never again pitched in the majors he had established enough of a legend to be elected to the Mexican Baseball Hall of Fame.

There is something that intrigues me about Luna and especially that card of his. The back featured a nice write-up and a big empty box where his record would  normally be. 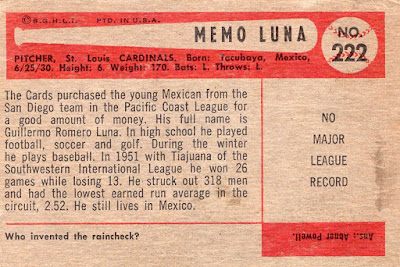 I went looking for the original photo that was inhanced for the Bowman card. I found it on the St Louis Post-Dispatch site. The story isn't accessable without turning off my ad-blocker so I can't link it. But here's the photo showing Luna in his Padres gear before Bowman painted him into a Cardinals uni. 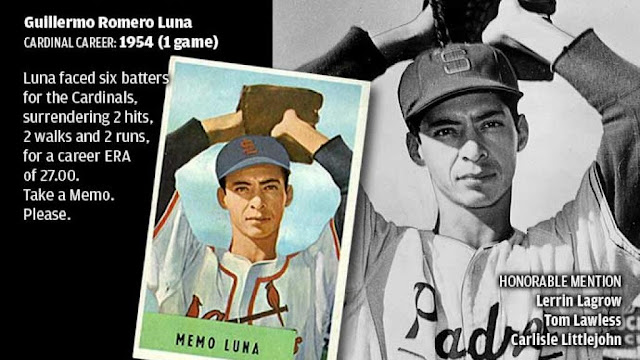 Luna's story, fleshed out a bit. can be read on this Cardinals fan blog. And the artisitc wizard Gary Cieradkowski just last month showed off his Luna card on his Infinite Card Set blog. And he tells the whole colorful Luna tale far better than I can. Highly recommended!