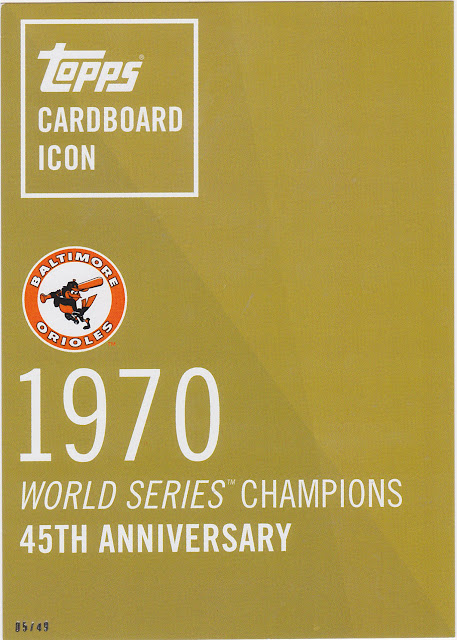 I like oversized collectibles. Postcards, 8x10s, even those old 5x7 photocards that Topps (and others) foisted on us in the cardboard bloated 80's...all that stuff is in my collection. The '68 Dexter Press Photo Cards are one of my most treasured collectibles. So I guess it's no surprise that I bit when Topps produced this 'commemorative' 1970 World Series Champions set made up of 5x7 reproductions of 1970 Topps Orioles cards. 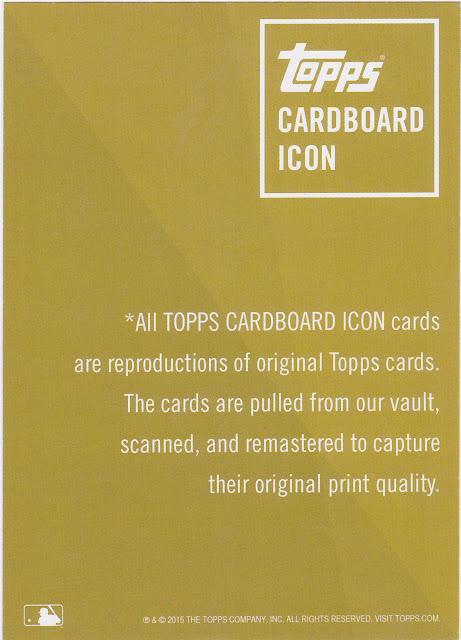 I don't know what the big deal about a 45th Anniversary is other than an excuse for Topps to churn out one more set in their line of Cardboard Icon stuff. While the 1970 set gets a fair amount of  well deserved criticism I cherish the Orioles in the set. I think Topps chose some really great pics.

This Cardboard Icon set contains ten cards plus the 'header' card shown above. As advertised they are blown up, gold bordered versions of  the originals. The set is numbered, I bought the cheapest available version which was numbered to 49 (why 49?) and my set is #5. If I was given a choice of sets I would have taken set #1 but #5 would have been my next choice. Not that it makes any difference in the grand scheme of things.

Anyway, here is Dave McNally. I like the fact that the larger photo size makes it easy to see what's going on in the background. McNally is posing with a bunch of hard working fellow Spring Training engaged teammates behind him. 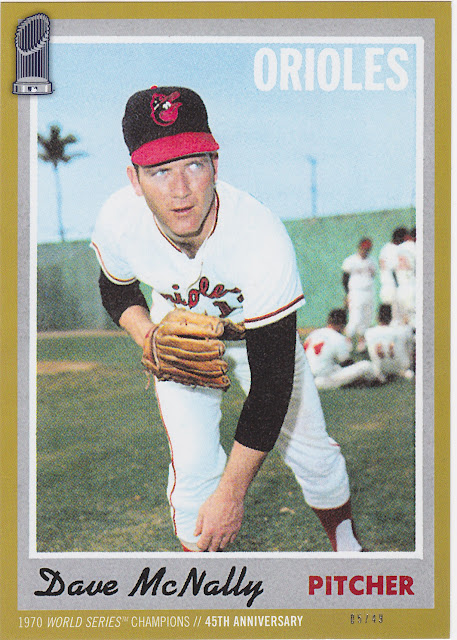 The little World Series 'trophy' that's been added is embossed and stands out every so slightly from the surface of the card. Next up is the always smiling Paul Blair. 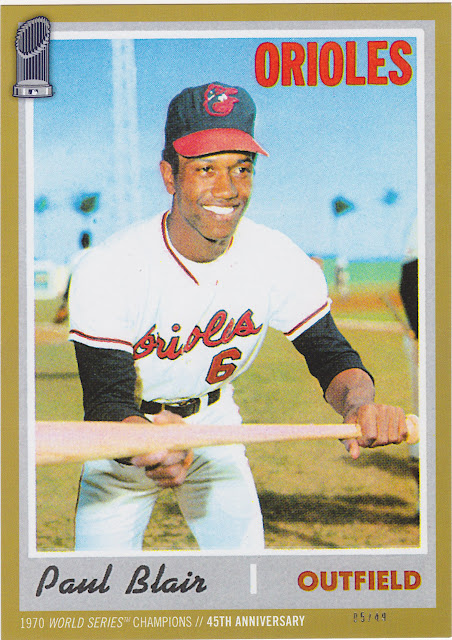 Boog Powell at Yankee Stadium. Looks like Mark Belanger is posing for a different photographer behind him. 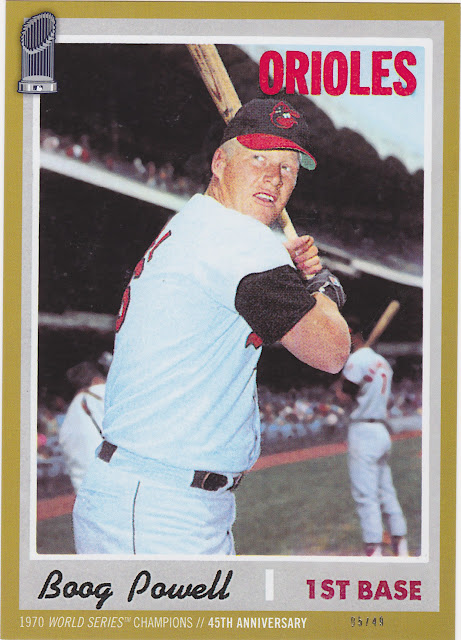 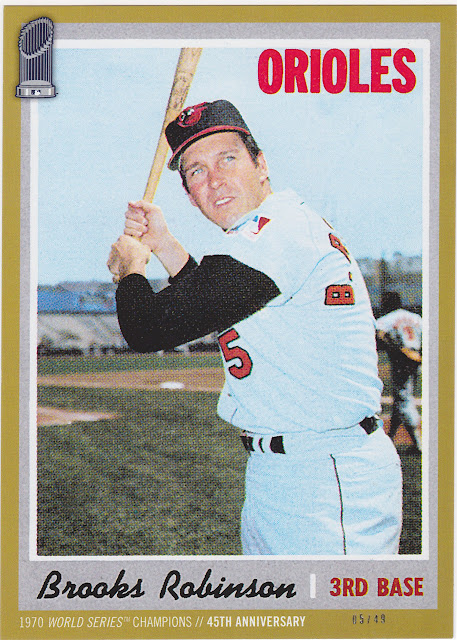 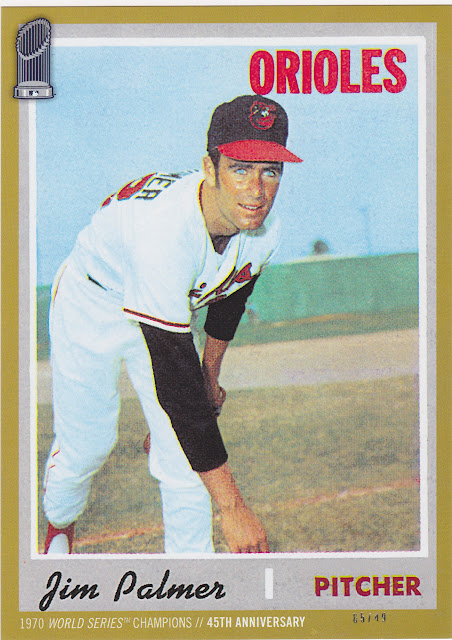 Frank Robinson, in still one more Yankee Stadium shot. He has the contented look of a man who knows a championship is in his future. 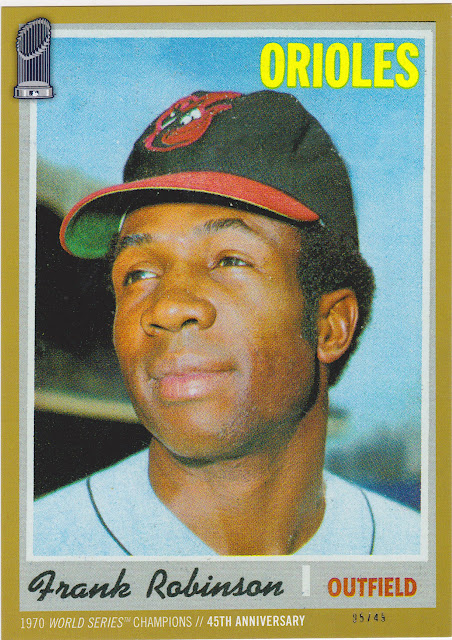 Davey Johnson posing as a second baseman flipping the ball to his shortstop or to a fan hanging out at the railing. No telling who that is way back to the left leaning into this Spring Training shot. 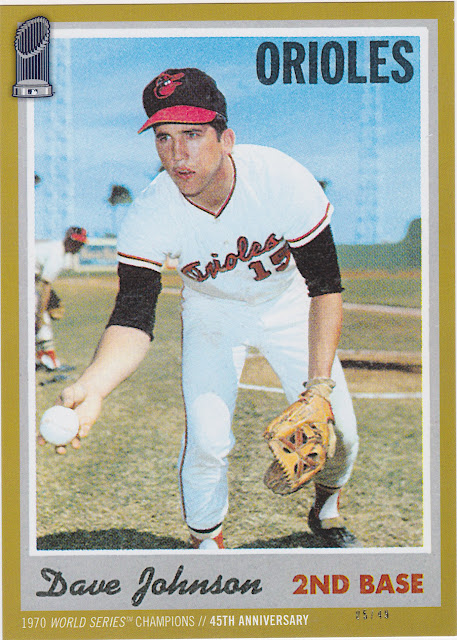 Topps included the two Orioles All Star cards, Brooks and Frank Robinson. The printing on these, especially the black ink, has a bit of the 'embossed' feel that is present with the World Series trophy logo on all the rest of them. 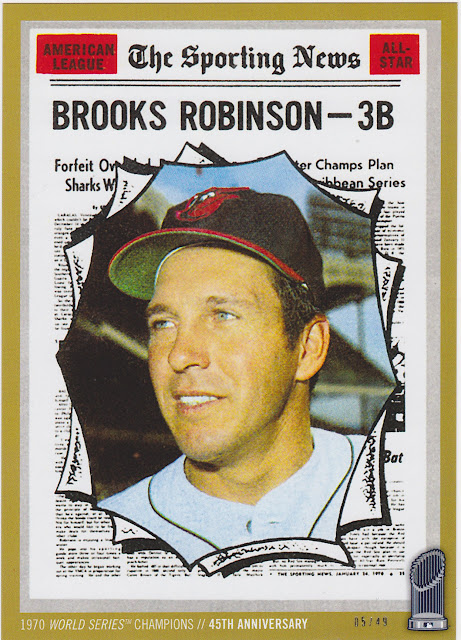 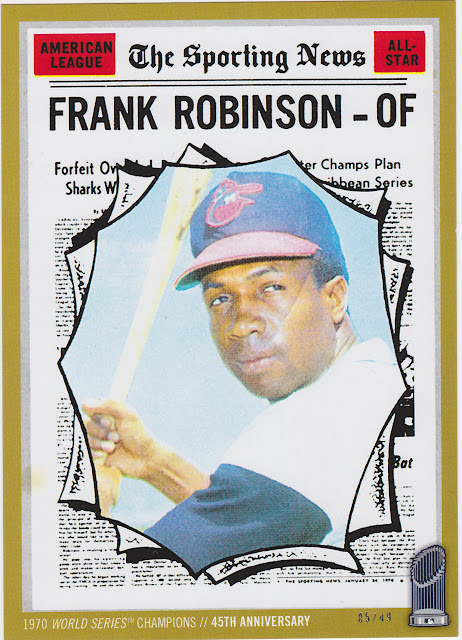 Like the fronts, the backs are replicas of the original cards. 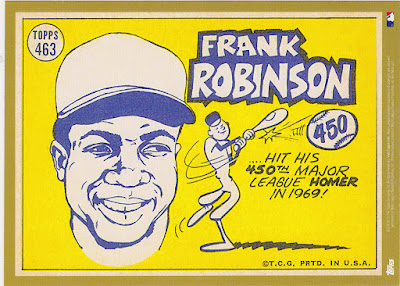 Most of the backs are sharp and clear. They reproduced well. Except..... 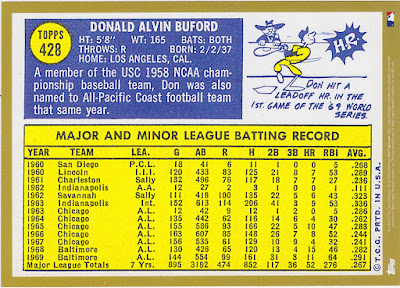 ...for Dave Johnson's card. This one is not nearly as sharp as the rest. 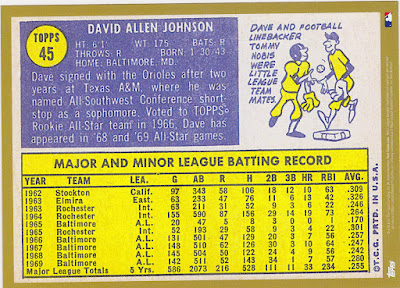 I saved one card for the end. Don Buford. I was scanning these as I opened the wrapper and didn't notice the fact that the team designation on Buford's card looks so terrible. How does this stuff happen on what is supposed to be a specialty (or at least premium priced) product? C'mon man! 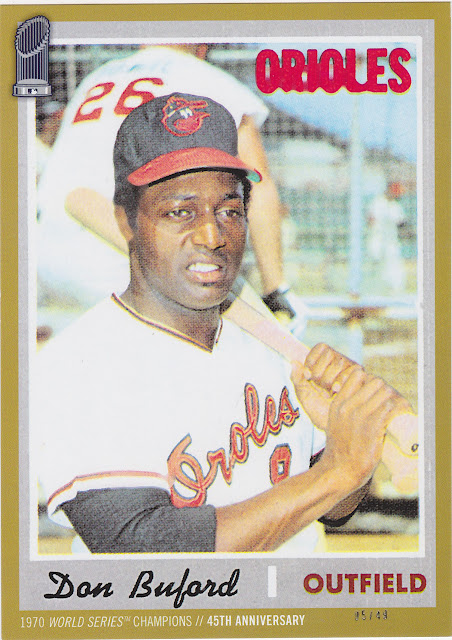 UPDATE: I've contacted Topps Customer Service regarding the Buford card. We'll see what they say.
Posted by Commishbob at 9:08 AM