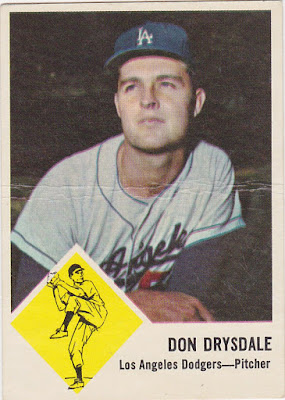 I've just about wrapped up the '63 Fleer set. I won a cheap auction for a Yaz and I'm looking at adding one more player card, Roberto Clemente as well as the elusive checklist.

Meanwhile here are a couple of the 'stars' of the set, Hall of Famers Don Drysdale and Ron Santo. That horrific looking 'crease' across the middle of the Drysdale isn't anywhere near as visible when the card is in hand. That seems to be a recurring theme with these. I'm not sure of why it happens. I guess my scanner just doesn't mesh with this set.

Both of these are Polo Grounds photos. I like how on the Santo card you get a hint of the apartment buildings on Coogan's Bluff behind the stadium. 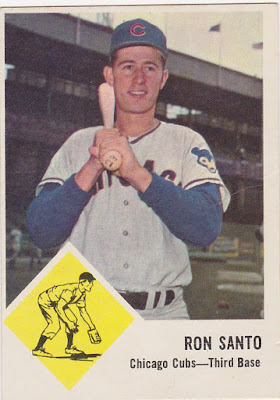 I scanned the backs side-by-side for some unknown reason but it does serve to show the wide variety of shades of green you can find on these things. 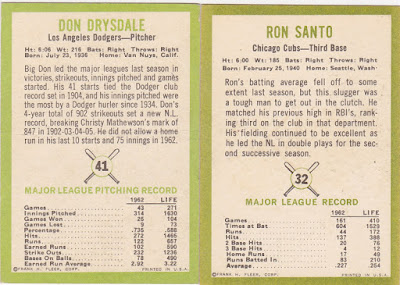 Santo's card points out how his average fell off in 1962 from the previous season. In fact he lost about sixty points from his average and it was the lowest of his career until his last season which he spent with the White Sox.

Drysdale, on the other hand was coming off a career year. He had 25 wins pitching 314 innings. Three hundred inning seasons are a thing of the past. The last pitcher to reach that was Steve Carlton in 1980. If you have a minute scroll down to the bottom of Drysdale's Baseball Reference page and check out how many times he ranked among the leaders in various pitching categories.
Posted by Commishbob at 12:39 PM