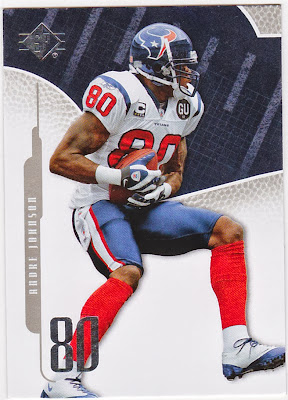 I don't remember whether I picked this up at a Target or WalMart. I do know that I was thinking that for $4 I pretty much couldn't go wrong. This isn't a Fairfield product as far as I can tell. The package looks like this:

As advertised there were 100 cards in the pack. If I was going to summarize it I'd say I got a little bit of a lot of different things. Since I do so little football card collecting lots of this stuff was new to me.

I'm a big fan of Andre Johnson of the Texans. He's a quiet warrior who does everything the right way on and off the field. I don't have any collections of current players but AJ comes closest. The card at the top is a nice shiny Upper Deck card of my favorite current player. Here's hoping for a big year from him.

I was very happy to get a Gale Sayers card. Sayers remains the most exciting player I've ever seen. He played only five full NFL seasons (and bits of two more) but his short career was pretty dynamic. He played as a tailback and as a kick returner and he was one of those players that was literally a threat to score any time he got the ball. On December 12, 1965 Sayers scored six touchdowns against the 49ers. In the first quarter he caught an 80 yard TD pass for a score. In the second quarter he ran for TDs of 7 and 21 yards. He caught his breath at halftime and in the third quarter he ran for scores of 1 and 51 yards. He capped off his day with an 85 yard punt return touchdown in the fourth quarter. Yikes! 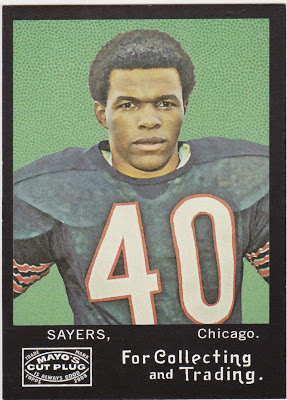 I also got this Bradshaw from the same Mayo Cut Plug throwback set.

The 1990 Pro Set football cards have a lot of nostalgic value for me. I put the set together a pack at a time and through trades with my students. It was a ton of fun. I was surprised to see one lone representative of the set in my repack. It's not miscut, just 'mis-scanned'. 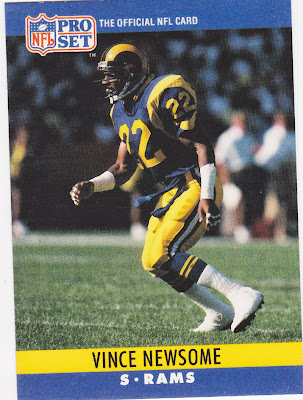 I had not thought about the Pacific football set in a long time. The Vikes have always had issues matching their purples. 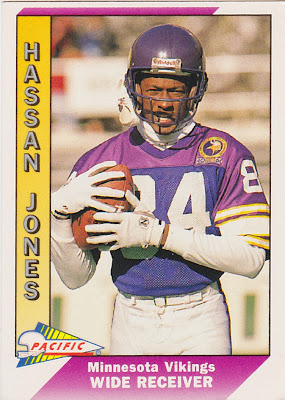 There were 95 other cards in the pack and, while a lot of them were run-of-the-mill, some were interesting and I'll toss them out in posts during the football season. Other than picking up cards of my fantasy team players and maybe a vintage pick up or two, I'm done with buying football cards for 2013.

Posted by Commishbob at 1:12 PM