In no particular order here are my favorite Orioles cards from my collection. All but a couple are base Topps cards. 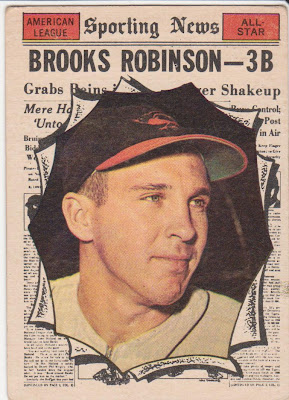 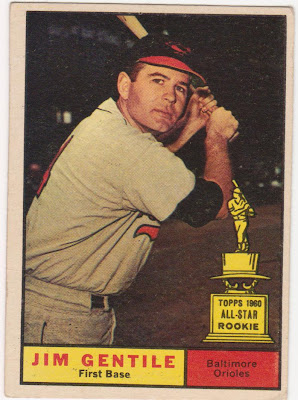 I wish Topps would continue with the 'player-on-a-top-hat' trophy. There is no such thing as a crummy card with this logo on the front. Jim Gentile was one of my early Oriole favorites. Nice pose here and the dark background shows Gentile off perfectly, just enough room to include that trophy. Quite a card. 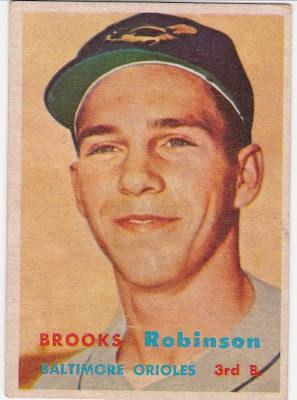 It's Brooks' rookie card. He looks so young and happy to be in the big leagues. This is the first 'high dollar' card I ever bought. I still remember the card show and dealer. Don't remember exactly what I paid but even though it was a fraction of one would go for now, I had to swallow hard to fork over the cash.  I've had several through the years. This isn't the best conditioned one but it's the first one, so it's special. 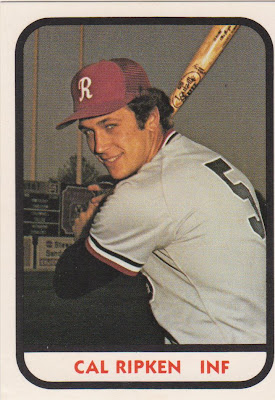 Speaking of young... This is an early 80s version of a lucky 'pull'. I ordered this Rochester set through the mail. When I opened it I found that I had a complete set and one dupe, Yes, I got two Ripkens. I should have sold one off at the height of the Ripken craze but that was also the beginning of the 'graded' card craze and since neither was in a slab with a grade, and I was too cheap/stubborn to pay to get it graded, I still have both. And I'm glad. I'd be willing to trade it but I don't really need anything anymore. 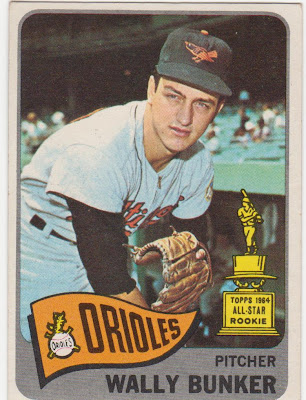 See that glove that Bunker has on? In the summer of 1965 I bought a Wally Bunker model Rawlings for $12 using my paper route money. I still have that glove. It was the biggest glove in Salvino's sporting goods store at the time and I was thrilled! I should have gotten something smaller but there was no way I was passing up a chance to play first base with an Oriole's glove. 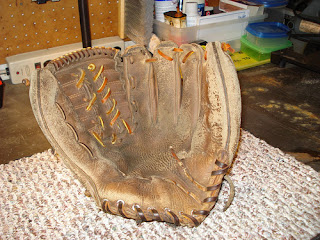 I still have it and it's in good shape. They don't make gloves like that anymore. No way the stuff they sell today will last through 40+ years of catch. 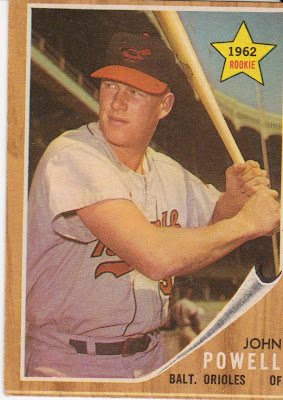 Boog's rookie card. The '62 set gets a lot of grief but I like it well enough. Boog is wearing #30 in this shot, and posing in Yankee Stadium. I like to think I was there when they took this shot since I saw several games in '61 but Boog didn't come to the Stadium until that final frenzied week of the season as Maris chased the HR record and I know I wasn't there for that series. I remember watching Jack Fisher give up #60 on TV. I was there in Memorial Stadium in '62 when Boog launched the first shot ever hit over he hedge row beyond the centerfield fence. 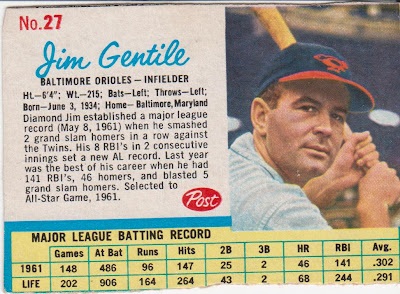 There was a family down the street when I was growing up in suburban New Jersey that consisted of Mom, Dad and about 8 or 9 kids, all boys. Needless to say they went through quite a few boxes of cereal. Those kids had a ton of these Post cards. I had a few (more of the related Jell-O version than the Post ones) and this is my favorite. I wasn't too good with the scissors apparently. 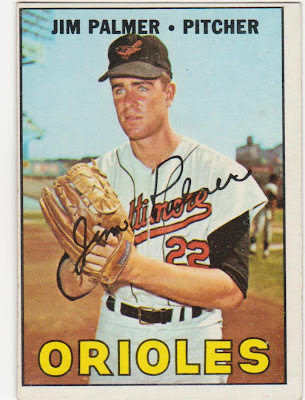 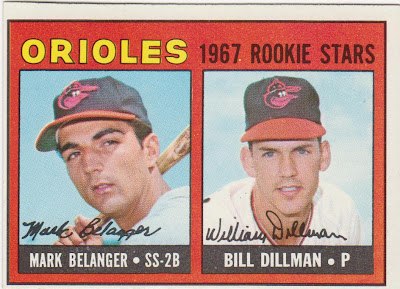 Back around 1980-ish I decided to collect all the Oriole cards that had been issued by Topps, etc, since 1954. The '57 Brooks was the monetary challenge (I had the '67 Brooks already) but this card was the hardest to track down in those pre-eBAY days. There were many more card shows then, some mail order dealers I bought from (is Larry Fritsch still around?) and quite a few shops I frequented but I could never find this '67 high number of Belanger and Dillman. And I can't remember where I finally found this copy but I do remember the dealer had tons of choice '67s. I bought two copies, one for the binder and one went in a display frame on my shelves. 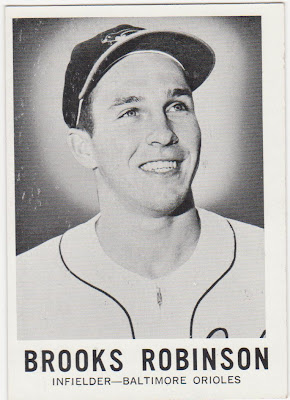 The Leaf set is a great one, black and white portraits with the halo effect behind the players heads. Brooksie doesn't have a care in the world, does he? Best non-Topps Brooks card ever. 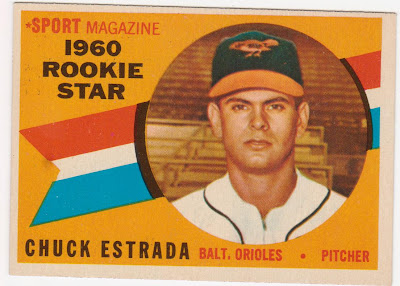 Now THIS is what a rookie card should look like. I think the orange color is part of the attraction to me but whatever. I pick up '60 Topps rookie stars when I come across 'em. And the back, with the gold and white motif.... wow, cardboard greatness. I treasure this one because Estrada was an early favorite of mine. Isn't that a great name? Chuck Estrada!! 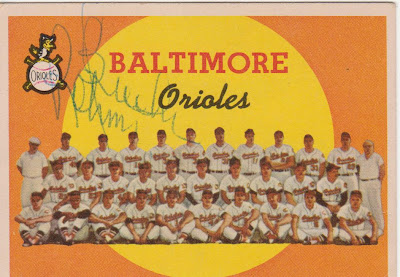 Team cards usually don't do much for me but this one is special. It has Brooks' autograph and it comes from the set I'm blogging. I picked it up while I was completing that run of O's cards I mentioned and I seem to remember that the dealer didn't ask much for it because it wasn't in very good shape. So even the sig didn't bring much of a premium. Oh well, I love this card in all it's orange and yellow glory. 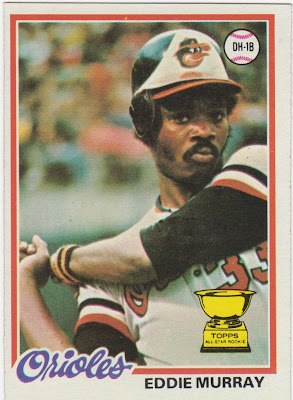 Here it is, the card of cards. Not the most valuable one I own, but by far the coolest. Eddie was one bad dude and you knew it the instant this card came out of the pack. The 1985 Murray is great, a classic perhaps, but this is "classic-er". This, my friends, is the Mona Lisa of modern cards.