These cards are in my collection and are my pick as favorites. As you can tell 'condition' doesn't play too big a part in what I enjoy. 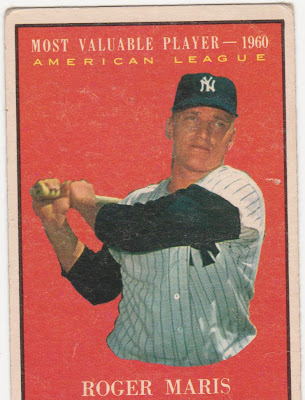 If you've read much on my blog you know I went to a lot of Yankee games as a kid. I never was able to understand why so many of the fans loved Mickey Mantle and hated Roger Maris. I figured he needed a fan so I volunteered. I didn't have any of his cards as a Yankee so a couple of years ago I bought this one cheap online. It's a mess and my lousy scan doesn't help but I really like it. 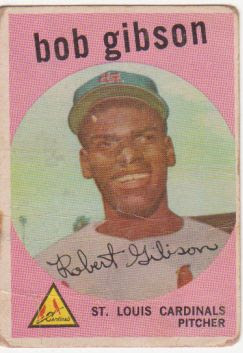 Gibson is a favorite of mine and this is a card that survived from my childhood. I'm glad too because it's a high $ card if I had to buy it for my '59 set. Love the pink frame. 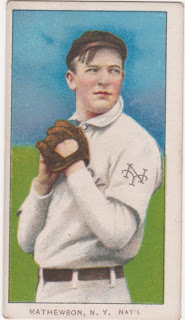 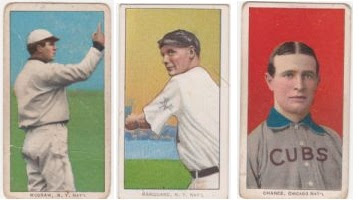 I have a couple dozen T206s, T201s and T205s. The Mathewson is the coolest one. This is the baseball card as a work of art. It is much nicer than it appears in the scan. The colors are bright, the border clean and bright. I bought these tobacco cards way back in the early 80s and, since I knew I'd never get very many, I made a few choices. I bought cards of Tinkers, Evers and Chance (and the 4th, forgotten infielder, Brown) and made a nice little display. I bought all the Baltimore players I could find at a reasonable price. I bought a small collection of common players in nice condition at a card show . And I bought some Hall Of Famer's cards, McGraw, Bresnahan, Marquard and this Mathewson. I haven't checked into card prices in years but I doubt I could replace these and they are the cards I treasure most in my collection. 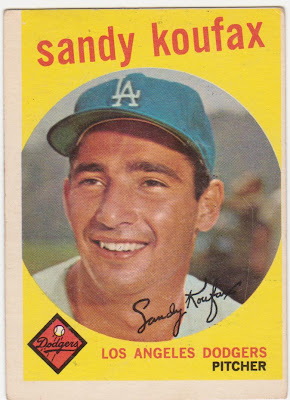 A smiling Koufax card is great. Except for the '56 Topps I have all his regular cards and this is my favorite, I think. The '64 is a good one, too, but it's hard to beat this portrait in a yellow frame. 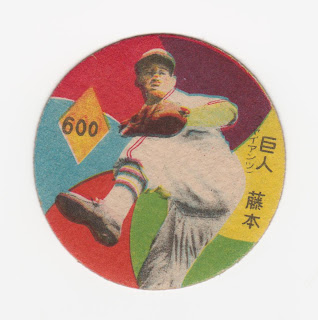 This was my first Japanese card and for awhile about four of five years ago they were all I was buying. I find them fun, colorful and fascinating. This isn't nearly my best Menko, it's out of focus, but it is the first. Somewhere I have an ID on this guy but for now I'll just post it for everyone's enjoyment. 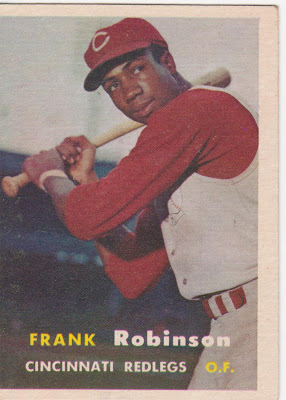 Frank is a favorite player of mine and I like the '57 design. It's his rookie card and even though it's off center it's in nice condition. Love the sleeveless 'Redlegs' uni as well. Just a nice card. 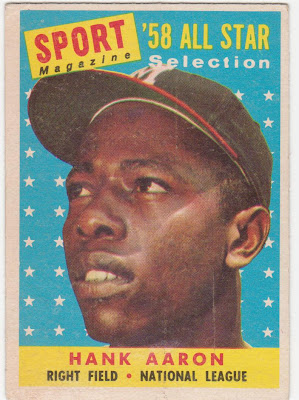 This is one of the first non-Oriole star cards I purchased. At the time I was trying to put together a Hall of Fame collection, one card for each member but I looked at the potential cost and decided just a few cards, those of my favorites, would have to do. The '58 All Star cards are pretty cool. I wish I had the Mantle. October 2012 Update: I now also have the Mantle, Williams, Musial and several more. 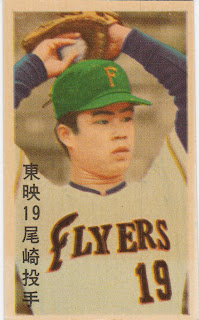 This is one of my 60s Japanese collection cards and it's really nice. It's the Toei Flyers' Yukio Ozaki first or second year card.  Sharp corners, rich colors. It's a bit yellowed but that's balanced out by the portrait, clean view of the uni shirt and overall quality. 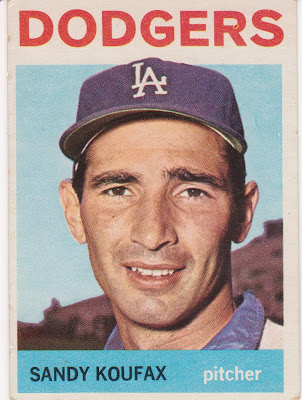 Another smiling Koufax card. I've been more of a buyer than a trader but I got this one in a swap for a handful of Murray and Ripken cards that I had in multiples of multiples. The 64s are not high on my list but I'll take a Koufax any day. 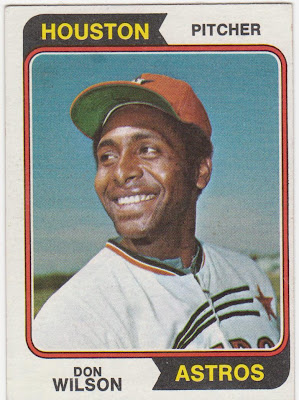 Seemed to me that every time I went to the Astrodome back in the 70s, Don Wilson was starting for the 'Stros. It turned into a running joke among my college buddies at the time. Wilson was a tough competitor, all business on the mound. I like this card because it shows him in a different, friendly light and the 1974 design is one of my favorites from that decade. 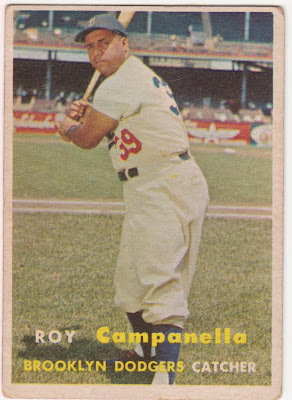 The '57 Campy with Ebbetts Field pictured in the background. That's all this card needs to be to end up on my favorites list. I'm still debating chasing the 1957 set when I finish blogging and upgrading the '59. 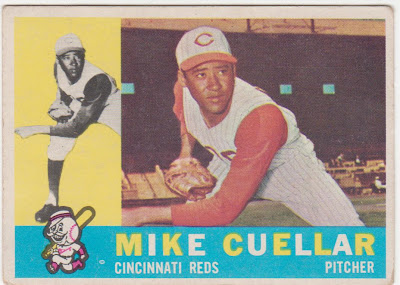 I got to talk to Mike Cuellar a time or two. I even sat next to him in the Astrodome when he was charting pitches from a seat right behind home plate. That was a fun experience. He's one of the guys I collect and I have all his regular cards, I'm picking up some oddball stuff as I go along. I sure like the 60 set, because of the gold/white back as much as anything. That's the first set I had a lot of cards of as a kid.