I recently picked up a small group of signed cards form the Topps 1959 and 1960 sets. I'm not an autograph guy particularly but adding a few to my sets is a nice bit of 'gravy'. What's more, these were in really nice condition so most served as upgrades as well.

Walt 'Moose' Moryn, whose '59 card blog post is here, was a fun-loving guy and a popular teammate. I included this from his SABR bio in that '59 blog post and seems worthy of being re-printed:

Among those who remembered Moose was Cardwell, whose no-hitter was nearly overshadowed by the drama of the game-saving catch. “He made me famous,” Cardwell told Jerome Holtzman for an obituary in the Chicago Tribune. “After I threw the pitch, I was leaning down with him and saying, ‘C’mon, Moose, make the catch.’“He was a good man, a ballplayer’s ballplayer. After the game I told him, ‘Moose, I owe you a beer.’ And he said ‘I’ll take you up on it.’ He enjoyed life. And he enjoyed people. He always drew the biggest crowd.”Another Cubs teammate was fellow St. Paul native Jerry Kindall, who was just 21 when he first arrived in Chicago fresh from the University of Minnesota. Kindall told Holtzman about his first encounter with the Moose. “I walked into the clubhouse and there was Walt,” Kindall said. “He was wonderful to me. He shepherded me around. He gave the appearance of a very gruff guy, but if you were a teammate, you saw through that in a hurry. He was really a tender-hearted guy.” 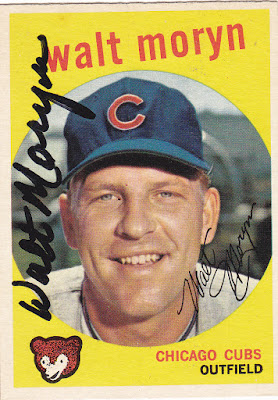 It's going on 10 years since I posted this card over on that set blog. Seeing a Ryne Duren card always reminds me of games at Yankee Stadium with my father. May they both RIP. 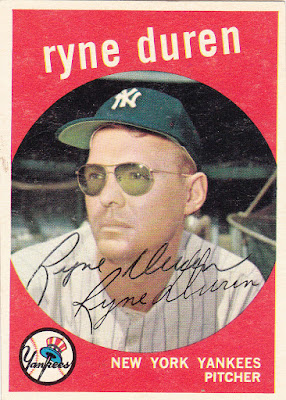 Johnny Klippstein began his pro career in 1944. Since I remember seeing him pitch I'm feeling pretty old right now. I included his first and last cards on the '59 set blog. Seafoam green card with a pic taken at the LA Coliseum...what's not to like. 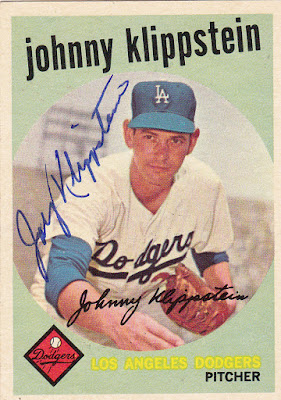 Klippstein again and I'd bet this photo was taken at the same time as the one above. His cap sits the same way on his head. Pretty consistent signature through the years for sure. 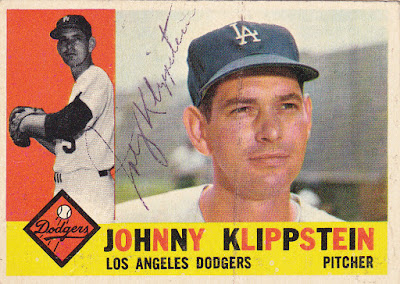 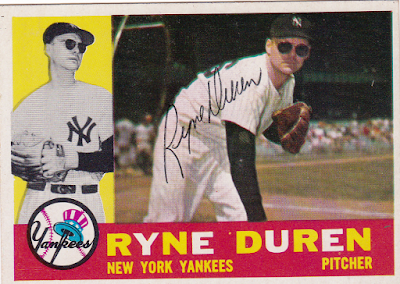 An old ESPN online story on baseball's hardest throwers had this entry for him:

How hard did Duren throw? Nobody used radar guns in those days, but Duren once told interviewer Dom Forker, "Anyway, I don't know how fast I threw, but I do know that Mantle told me I was the fastest he ever saw. And Tony Kubek said I threw harder than Nolan Ryan."

The alcoholism that hampered his career became others' salvation as Duren became a counselor later in life.

There was also a 1994(?) Topps Archives faux '54 signed Klippstein in the mix but I didn't scan it. If anyone happens  to be collecting that set signed get in touch.

Posted by Commishbob at 6:55 PM