I'm accumulating a bunch of 1967 Topps baseball these days. I really don't know if I'll go after the whole thing. But, even if I don't, there are worse things to have sitting around that these gems, yes?

I got this Clemente from a guy on Net54. My friends and I were endlessly amused by the fact that the Pirates wore caps with their letter logo applied via a patch on the front. That was the sort of thing we got as giveaways on Cap Days. 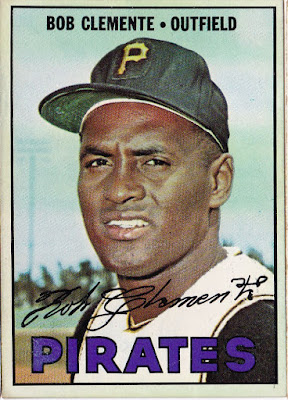 But 'patch cap' notwithstanding, it's a neat portrait card.

Glenn Beckert passed away recently, and I was reminded of how good that Banks-Beckert-Kessinger-Santo infield was back in their heyday. I also thought about it just this week while looking into Dick Ellsworth's 1960 card for an upcoming post on that blog. He had few good things to say about the Cubs' organization of that time. 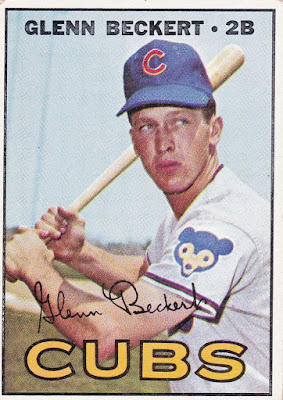 Roy Face popped up on that blog as well with his special card shared with Hoyt Wilhelm.  Face went 18-1 for the Bucs in 1959 pitching 57 times out of the bullpen. I don't see how that's possible but it happened. 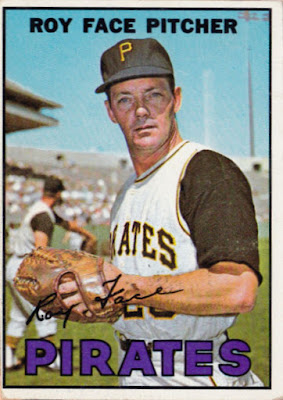 And it looks like Face had a legit, directly embroidered cap. I wonder how this all worked?

Here are three guys who were, at one point or another, Orioles.

Don Buford played for the O's for five seasons, from 1968 through the end of his career. He was with the Sox for five years before that although his first season was just 12 games. Buford played four years in Japan after his Orioles tenure.

He was an infielder during his Chicago days. When he came to Baltimore he played almost everywhere for a bit before settling in as the regular left fielder on those powerhouse clubs of  '69-'72. He made one All-Star team. In the 1971 ASG he batted for the guy whose card is just below and he whiffed.

My scanner cut the bottom border off Buford's card and I'm too lazy to dig it out to re-scan. 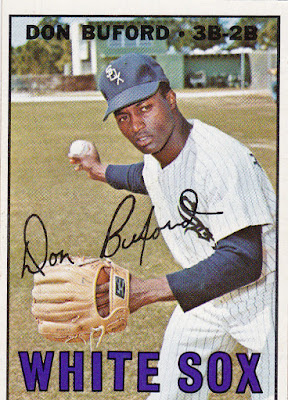 Here's one of my very favorite players, Mike Cuellar. I've always liked this road uni. It was what the 'Stros were wearing when I first got here and I followed them very closely. Cuellar was good in Houston. Begining in 1969, he was great for the Orioles. 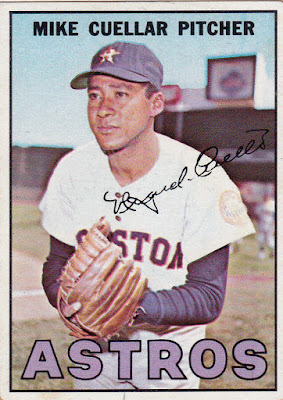 This is as good a place as any to reprint my story of sitting next to Cuellar in the Astrodome for a 1968 game. This was posted back in 2014.

Last man up is Johnny Orsino. Unlike Buford and Cuellar, he was an ex-Oriole in '67. He came to Baltimore in 1963 after a long minor league climb through the Giants' chain and a few months of big-league time in San Francisco. He stepped into the starting catching job, played 116 games, hit .272 and swatted 19 homers. It was easily his best year in baseball. His playing time dropped over the next few years as his hitting regressed. He split time with Dick Brown and Charlie Lau for a couple of years. Andy Etchebarren pushed that entire crew out of the picture in the Orioles' championship year of 1966. Orsino had been dealt to the Senators for Woody Held. He played little and, in fact, had just one at-bat in '67 and never played in the majors again. But he can say something that a lot of major league vets can't say. His name is in a World Series box score. He had an at-bat in the '62 Series for the Giants. In Game One, he entered as part of a double switch in the top of the ninth and faced Whitey Ford in the bottom of the inning. Ford got him to ground into a 5-4-3 double play. 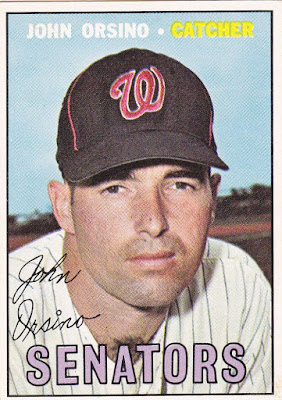