The Trouble with Tribbles

I've fallen way behind on scanning/posting the many great items I've received in packages from fellow bloggers/readers. I'm going to try to play catch-up here over the next week or so. I'll sprinkle in a few related items I've picked up online and at shows where appropriate. I'll go in the order that I received these (as best I can remember!)

If you are a fan of the original Star Trek television series you probably remember the Season Two episode that I reference in the title. Tribbles were fuzzy little creatures that multiplied frequently and prolifically and quickly overtook every nook and cranny of the Enterprise. That's kind of how the 1971 Topps set has been for me. First of all, it's by far the largest set I've attempted to collect piece by piece. My three column Excel checklist runs five pages. Even with narrow margins.

For the longest time, before I had a binder set up, I had little stacks of these babies all over my desk and shelves. They seemed to be everywhere. And my want list looked LONGER every time I scratched off the cards I acquired.

After one of my last postings for the set chase, I heard from John who writes Johnny's Trading Spot. He let me know that he was sending some stuff including two cards from my '71 list. 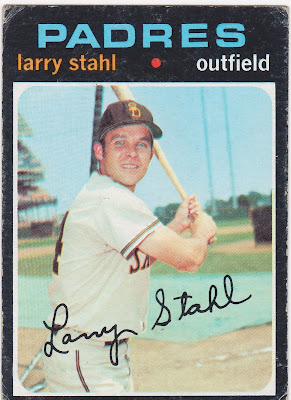 Larry Stahl was coming off a two year stretch under the Mendoza Line but was rebounding nicely when this card arrived in 1971. He had been selected off the Mets' roster by the Padres in the expansion draft after the '68 season. Which meant he lost a shot at being a part of the 1969 Miracle. His final major league at-bats came with the Reds in the 1973 playoffs. He got two hits in four trips against the victorious Mets. 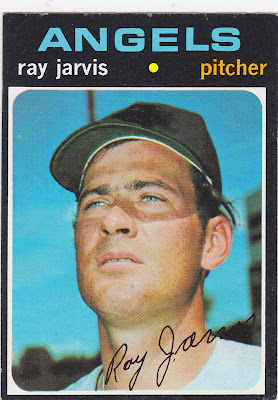 Ray Jarvis pitched in 44 big league games, all for the Red Sox in 1969/70. He was traded to the Angels right after the 1970 season but didn't make the team and pitched for their AAA affiliate in Salt Lake City. He had some arm issues and was cut during Spring Training of 1972 and went into sales and eventually coaching at the college level. He had a rather long and interesting SABR bio, especially for a guy with such a short career.

Thanks again, John, for knocking off a few Tribbles 71s.

I attended the hotel card show last Saturday and added six or so 71s including a few star cards. They all came from my friend, Darryl, the show's promoter. I also lost(!) two 1971 cards that I bought from a different dealer. They simply were not in my bag when I got home. They were easy to replace since they were not SPs or anything but to simply lose $5 worth of cards is pretty frustrating.

These were among the cards that DID make it home with me on Saturday: 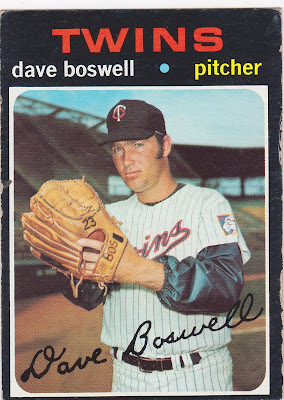 I'll always remember Dave Boswell for his part in the terrific ALCS Game Two matchup he had with Dave McNally of my Orioles in Memorial Stadium in 1969. With me and my father watching from our seats above the left-field bullpen he dueled McNally for 10 innings, wriggling out of a few jams along the way in a scoreless ballgame. He walked Boog Powell to start off the bottom of the 11th. Powell was bunted up to second by Brooks Robinson. Dave Johnson was walked to fill up first base and when Mark Belanger popped out it looked like the game might go to the 12th. But Billy Martin did us all a favor. He brought in Ron Perranoski who had gone almost four innings in relief the before in that 12 inning affair. Curt Motton pinch hit for Ellie Hendricks and roped one to right for a hit and Boog trucked it on home for the 1-0 win. A great weekend!

I got a nice deal on this off-condition Roberto Clemente. I've 'conditioned' myself to look past condition while building this thing. Just like I did with the 1962 set. But it's a beauty with or without nice corners, isn't it? Love this card! It's so damn Clemente. 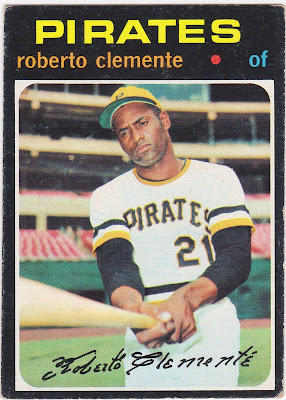 These next two cards are really as nice in hand as they appear to be in the scans. First, here's Sparky. 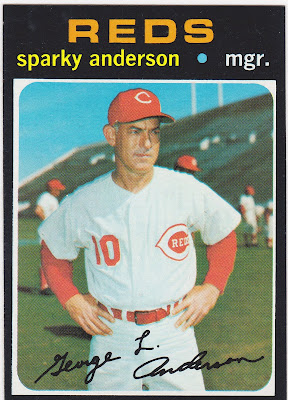 That's a Reds' home uni he's got on but that sure isn't Crosley Field. I did some digging and I'm 99% sure that the photo was taken in Tampa. The original Tampa Stadium was built in 1966 and was directly behind the Reds' spring training home field, Al Lopez Stadium. It's visible in this shot which I found after a lot of digging on the net: 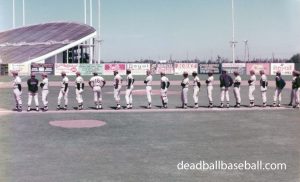 It's hard to tell whether the photo of Sparky was taken in Lopez Field or perhaps the Reds were working out in the football stadium. One thing I DO know...these posts wouldn't take nearly as long to finish if I didn't have this weird compulsion to know just where the photos were taken on baseball cards. 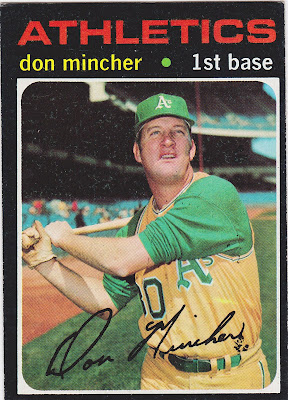 Finally....here is a clip from the Star Trek episode I mentioned. With a William Schallert
(Patty Duke's TV dad) sighting!