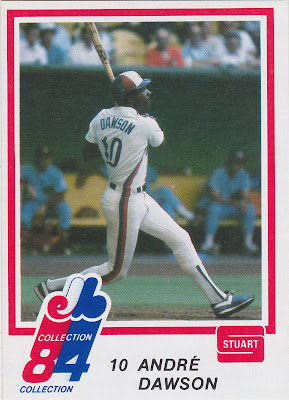 I recently mentioned that I've always had a soft spot for expansion teams, the Expos and Pilots in particular. I really don't chase much of their memorabilia, I have enough things on my plate, but a few items have found a place in my collection. Most of it is from the 1969 editions of the teams. (Of course, that was the only year for the Pilots.) and most of what I have are publications.... yearbooks and game programs and a few oddball items.

After years of rotating through 'favorite' NL teams (the Dodgers, Phillies, and Giants at one time or another) I settled on the Expos when I visited Montreal in 1969 and attended a game that August. Several years ago I found this 40 card set on a table at a large Houston show. The dealer was a former card shop owner who was still in the process of clearing his inventory and being a part-time show promoter (he still is, I believe).

This is the '84 edition of the Stuart's Bakery set. There is also a 1983 edition. The '84 Expos were less than the sum of their parts it seems. Lots of name players and yet the team finished fifth in the NL East. But, no matter. These are attractive cards with some neat 'specials'. 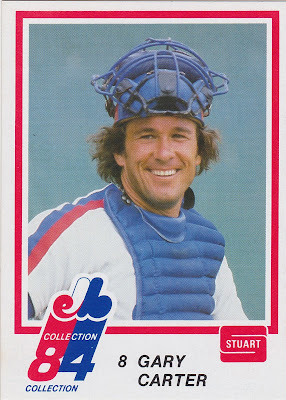 These are standard sized cards with bright, clean fronts. The card stock feels a bit 'rough', you can see 'fibers' on the back of some of them. The cards were not cut very precisely meaning they have very slight differences in width which is noticeable when they are stacked. Maybe they used O-Pee-Chee's press room.  👀😞 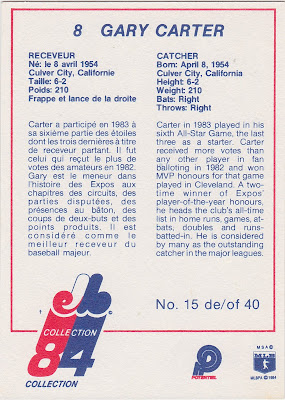 As you'd expect, the backs are bilingual. 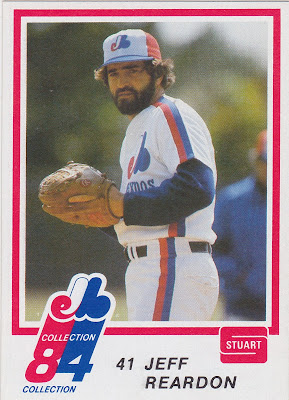 A lot of people think this is the best uniform the club ever wore. I'm partial to the original set but these are pretty sharp. 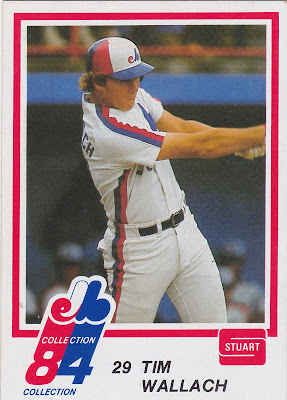 One thing about Pete Rose...he always looks like Pete Rose. 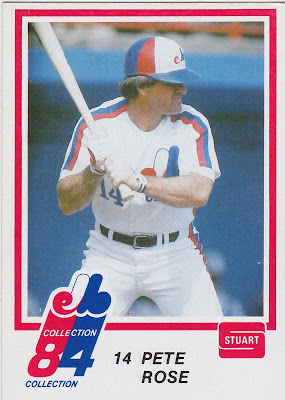 Chris Speier spent half of 1984 with the Cardinals after the Expos dealt him off in July. 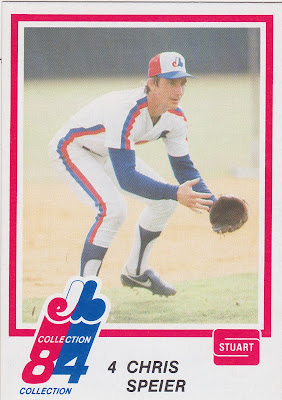 Rock led the majors with 75 steals. 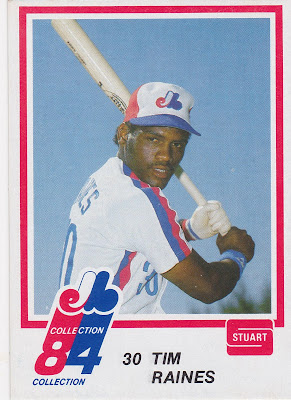 Steve Rogers' days as a frontline pitcher were over. He lost 15 games and only had one year left in the bigs. 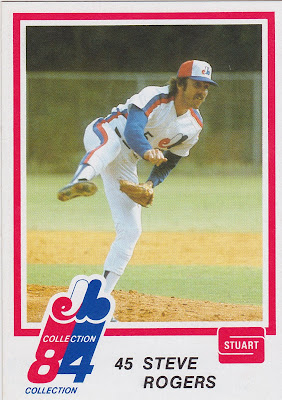 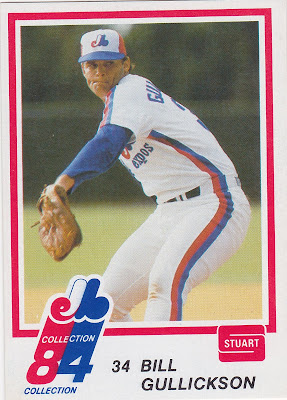 When the Expos moved to Washington their mascot, Youppi!, landed on his feet with a new gig as the Canadiens' mascot. 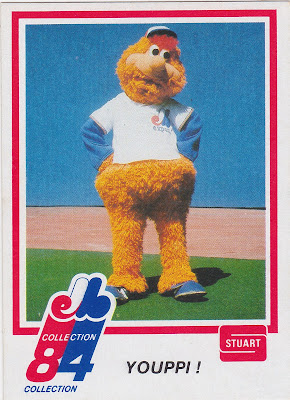 Now would be a good time to post this video.


Bill Virdon didn't last the season in Montreal. With about a month left in the season, he was replaced by Jim Fanning. This was the last managing job he held. 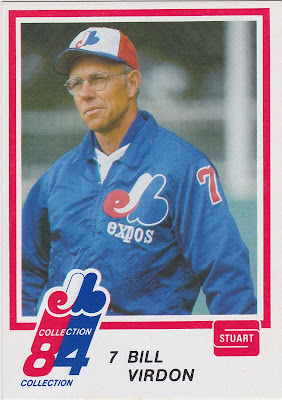 Felipe Alou was still about eight years from taking on his role as the Expos' manager. 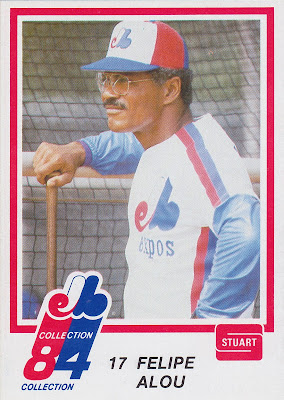 Here is a multi-player card with some of the bigger names on the club. 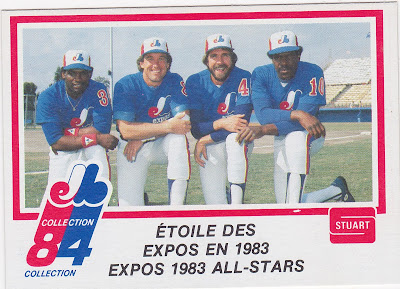 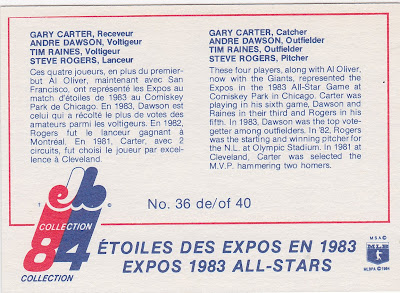 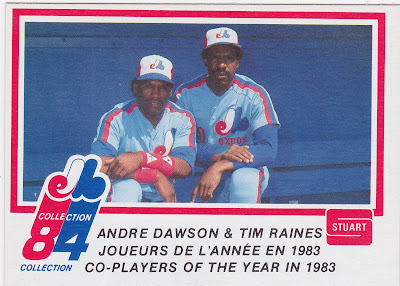 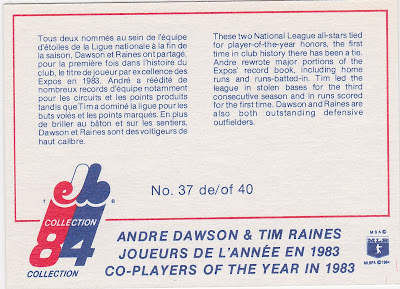 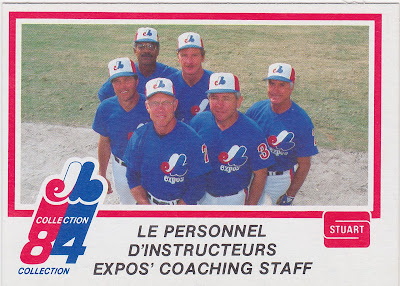 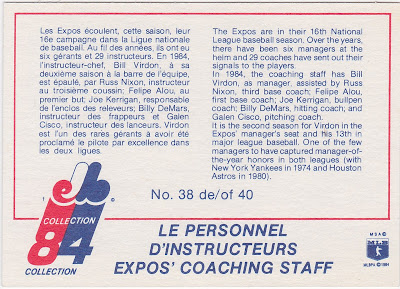 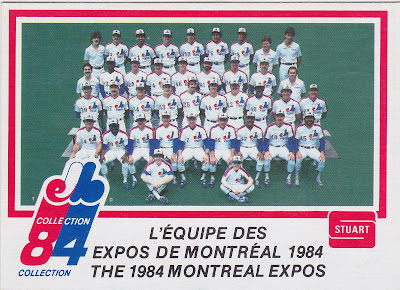 The team card has some minutiae on the back such as oldest, tallest, etc. 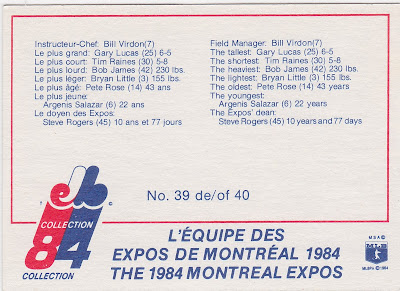 The last card had the checklist on the back. 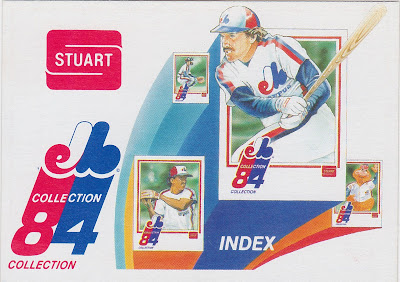 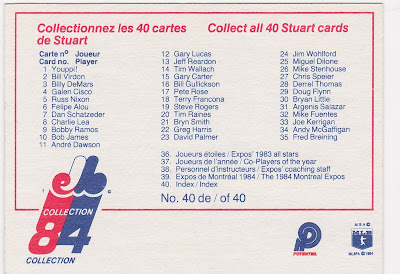 Fun little set. Well designed (if not especially well made) and it looks nice in a binder. Hard to beat 80sfood issues, especially if they are authorized and have logos.
Posted by Commishbob at 2:07 PM