First up is another card from a contest I won on Net54. 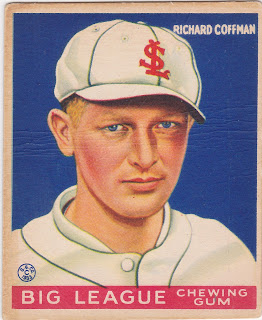 This 1933 Goudy Dick Coffman gives me about a half dozen from the set. (The best, by far, is this Paul Richards card). Coffman broke in with the Senators in 1927 but was soon traded to the Browns for whom he pitched until he was dealt back to the Senators in June of 1932 for pitcher Carl Fischer.

After that '32 season the Nats and Browns traded the same two pitchers for each other again! Coffman went on to pitch another three years for the Brownies. Finally, in November of 1935, Coffman managed to land in a better situation than toiling for two AL bottom feeders.

He was purchased by the New York Giants and spent three seasons as their #1 bullpen guy. He led the NL in games pitched and saves in 1938. He even garnered a few MVP votes. He pitched (rather unsuccessfully) in both the '36 and '37 World Series' for the Giants against the Yankees.

In 1940 he landed with the Boston Bees and then spent several seasons in the minors before he reappeared in the majors briefly with the Phils in 1945. In '46 he did some pitching and managing in the minors and then was gone from pro ball.

I'm posting an oversized image of the card's back to make it easy to read. The write-up mentions his Washington-St Louis travels and calls him an 'elongated young man, towering(?) 6 feet, 1 1/2 inches'. 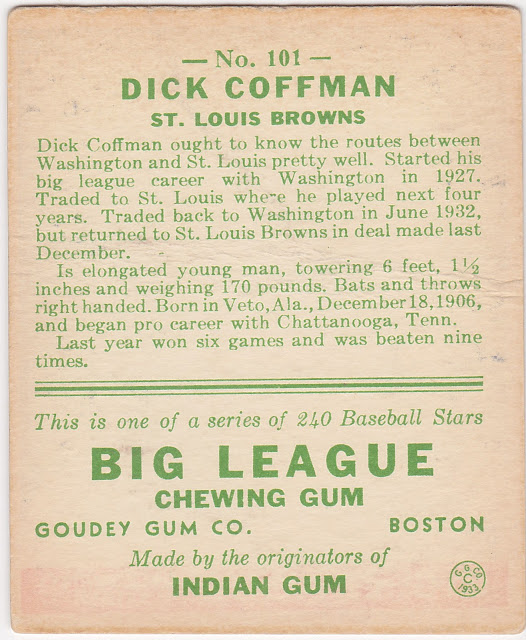 Next up is another 1962 'type card' for the back of that set's binder. This is the Venezuelan version of the Wally Post #148. Topps had previously distributed versions of the '59 and '60 set in Venezuela. But the '62 set is the first that has Spanish language write-ups on the back. 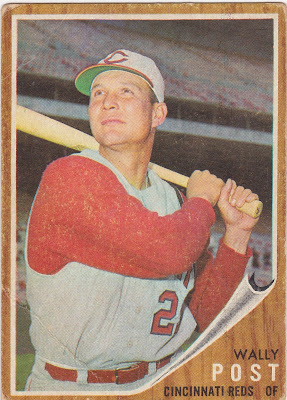 Topps, as was their normal MO in these sets, only distributed partial versions in Venezuela. In this case the cards are from the first two series minus #197 and #198 which supposedly don't exist. There are no 'green tint' versions, either.

You can see the differences in the card backs below. Interesting that Topps kept the English wording in the stats block heading and the player position under his name.  This article on the PSA site mentions differences in ink and cardboard color but honestly I'm just not seeing much. Small sample size I suppose. 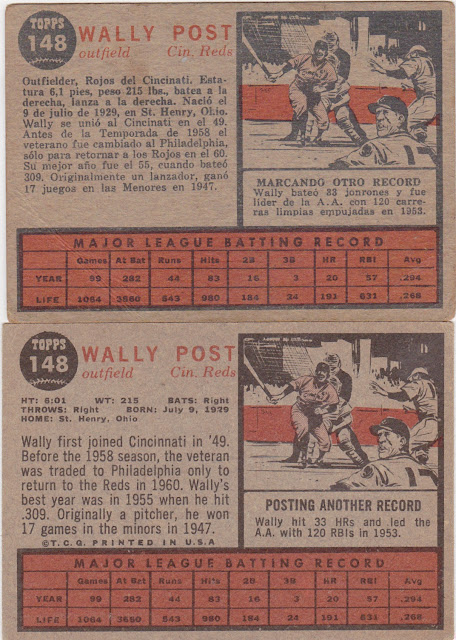 The 'regular' (US non-green tint) version from my set is on the left, the Venezuelan version on the right. That PSA article is right about one thing, these Venezuelan Topps cards are usually found in pretty brutal condition. I decided on the Post because it was in decent shape and it's among the better poses in the cheap group I was picking from on eBay. 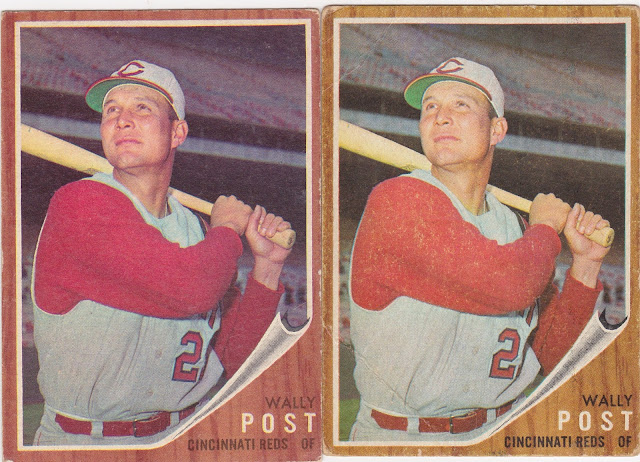 I need to find a green-tint Post and look at them all side-by-side I think.
Posted by Commishbob at 3:14 PM