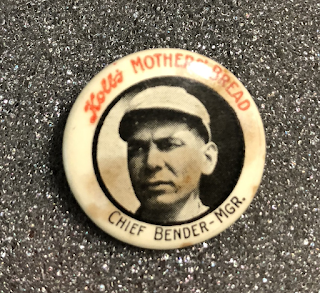 Charles Bender loved baseball and after his major league (and Federal League) days had ended in 1917 he pitched and managed in the minors before returning to the big leagues as a coach for several organizations. Along the way, he also coached the US Naval Academy team for four years.

In 1922 he was managing the AAA International League's Reading (Pa.) Aces and took a regular turn on the mound. He threw 183 innings at the age of 38 and had some pretty impressive numbers. That same year the Kolb Baking of Philadelphia issued this small pin as part of an ongoing set that continued into 1923. The pins promoted Kolb's Mothers' Bread. 32 different pins are known and the ACC classification is PB4.

The pins are small. I took this picture to show some perspective: 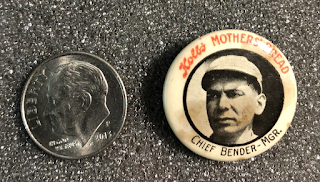 Bender is not the only well-known name in the set. Al Schacht aka 'The Clown Prince of Baseball' is also included. I have problems taking glare-free pics with my phone and I'm too lazy to dig out my digital camera so I'm including a shot from an online auction of three other PB4s.

EDIT...In the comments, Fuji asked if there was any info on how these were distributed. I had spent a bit of time poking around previously but hadn't found this until I played around with different search terms: 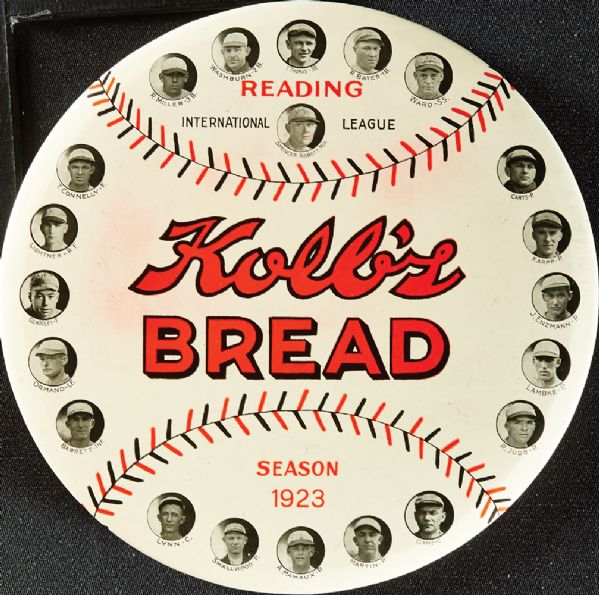 This is a store display item that was auctioned thru Goodwin Auctions' site in 2014. The text description implies that the pins were distributed with the packages of bread themselves. Here is the text from the auction description:

"In 1922 and 1923 Kolb’s Bakery, makers of Mother’s Bread in Reading, Pennsylvania produced a set of small discs which were included with loaves of bread as a sales premium. The Reading International League entry was known as the Aces in 1922 and changed to the Keystones in 1923. Another significant change for 1923 was the departure of Chief Bender who had served as the team’s player/manager the previous team. Thirteen of Reading’s 20 players on the 1923 roster would log time in the majors. To help promote the collectors’ disks, Kolb’s Bakery created these marvelous store displays, showing all the players in the set, while silently teasing children to get their mom’s to buy Mother’s Bread. We can only assume the promotion met with marginal success, considering the set was abandoned after a mere two years"