Three more from the 1960 Managers subset. First up this time we see the Dodgers longtime skipper, Walt Alston. 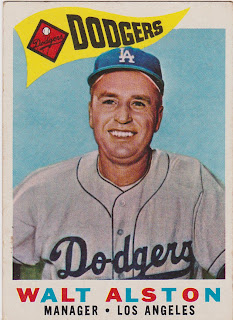 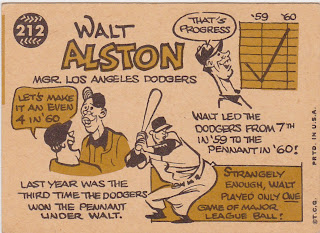 Alston has one at bat in the majors. One. On September 27th of 1936, as a member of the Cardinals,  Alston entered the game at first base after Frankie Frisch pinch hit for the ejected Johnny Mize. He came up to bat later and fanned. Made and error at first as well. Never saw the field in a major league game again, as a player at least.

That didn't deter him from having a standout Hall of Fame career in the Dodgers' dugouts in Brooklyn and Los Angeles. He took over the Dodgers from Charlie Dressen in 1954 and held the job for 23 seasons. His clubs won for World Series' titles and seven NL pennants. he managed 3658 games and won 2040 for a '558 winning percentage. Only four times out of those 23 seasons did the Dodgers finish in the second division of the NL.

The serious and studious looking Alston never signed more than a one year contract as manager of the Dodgers. As always he appears on his card looking like your favorite old uncle. 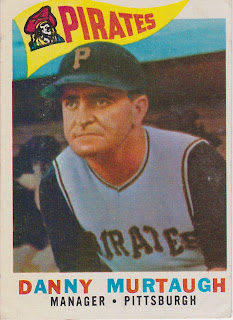 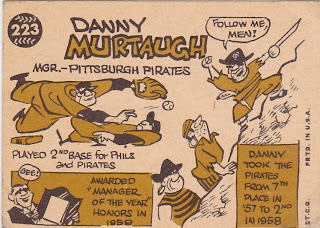 Danny Murtaugh on the other hand played in the big leagues for nine seasons as an infielder for the Phils and Pirates and, for a handful of games, the Braves. He took two years to serve his country during WWII. He played almost half those seasons as a regular with his best year being 1948. He led the league in several defensive categories as a 2nd baseman and hit .290 with 71 RBI.

He managed in the Pirates chain after his playing days, coached with the big club and then took over the helm in Pittsburgh in the middle of 1957. Through the years Murtaugh had four separate terms as Pirate skipper totaling 15 years. He won the World series in 1060 (thanks to Bill Mazeroski's dramatic homer) and in 1971 when Roberto Clemente and friends knocked off the Orioles.

Danny looks pretty managerial on his card. He's posing as if giving the home plate ump the 'what for' over balls and strikes. Note the batting helmet he's wearing. As I understand it Branch Rickey wanted every member of the team to wear a helmet at all times during a game. Even the pitchers. That's why you frequently see Pirate cards that show someone like Ron Kline wearing a helmet.

Here is the late, great Chuck Thompson's call of the Maz homer. 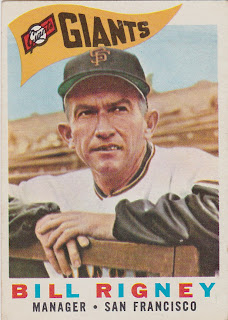 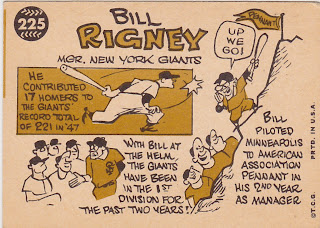 Now Bill Rigney really looks like a manager. Arms crossed and leaning on the dugout (wood???) rail. Mouth clenched, eyes hard. I bet he's hacked because when he asked his star Willie Mays to sign a ball for his grandkid Mays never looked up and then rolled the signed ball across the table at him. Hey, it's possible likely.

Rigney played all around the infield for the New York Giants from 1946 to 1953, four of those years as a regular. He made the '48 All Star game and drew a walk after subbing in for Red Schoendienst. He began managing with the Giants in New York in 1956 and was a fixture in dugouts in both leagues right through 1976 when he returned after four years as an exec to manage the Giants a second time.

In addition to his six seasons with the Giants he managed the Angels for nine and the Twins for three. His 1970 Twins team won the AL West title but fell to the Orioles in the playoffs. After managing he served in the front office of the A's and was a broadcaster.
Posted by Commishbob at 6:30 AM